Johnny Cueto beat the D-backs and broke A.J. Pollock's hand, it couldn't have gotten much worse than that.

It was just going to be your typical disappointing 2014 D-backs loss up until A.J. Pollock was hit by a Johnny Cueto change-up on the right hand. He was taken back for x-rays and the result certainly isn't pretty:

Pollock's play has been on a steady incline as the season has gone along and was just named National League player of the week last week for his latest surge at the plate. For this to happen right when things were starting to look good for the center fielder is a microcosm of the 2014 season for the Diamondbacks. At this point it's a crushing loss, and while that may be overstating it a bit, recent history has shown that hand injuries are tough to come back from.

One of the bright spots that I was going to take away from such a terrible game was how fun it has been to watch Pollock play in the outfield and his approach at the plate. Cueto ruined that for me.

The Reds' right hander allowed just five hits tonight while striking out seven over his 7 1/3 innings of work. The D-back hitters didn't have any answer for Cueto, and couldn't come up with the big hit when runners were in scoring position late in the game.

It’s striking how different a pitcher can look from one inning to the next.

As is typically the case, Brandon McCarthy breezed through the first inning, striking out two. He then recorded a seven-pitch second innings, and a 1-2-3 third, facing the minimum.

Cue the 4th inning melt down.

Billy Hamilton led off the inning with a single, which of course doesn't help any situation due to all of the attention he garners when he reaches. Even so, McCarthy had opportunities to get out of the inning, but couldn’t make the right pitches when he needed to. Brandon Phillips and Todd Frazier had RBI singles, and Brayan Pena knocked in a run of his own with a double to right center.

The Reds cashed in three runs in the fourth and forced McCarthy to throw nearly 40 pitches in the inning, after just 31 through the first three. It has to be mental with him at this point.

At that point, the Reds hitters looked extremely confident at the plate and were taking healthy hacks on whatever came their way. And when it rains, especially for McCarthy, it pours. Cinci scored two more in the fifth before Kirk Gibson had enough and pulled him in favor of Joe Thatcher to get the final two outs of the inning.

The combination of Thatcher, Cahill, Perez and Reed all contributed to the zeroes in the final 4 2/3 innings of the game. 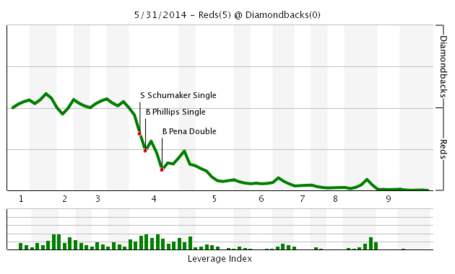 The show must go on without Pollock. Wade Miley will toe the rubber tomorrow against Alfredo Simon to try and tie the series up at two wins apiece.