Brandon McCarthy was excellent, J.J. Putz and Addison Reed less so, but the end result was acceptable, as the Diamondbacks took their third victory in a row, beating the Padres in San Diego. They're now above .500 on the road, with an 8-7 record.

And adding to my new-found status as the Nostradumbass of the SnakePit (that's how you spell it, isn't it?), in the Gameday Thread intro, I also wrote, "Another pitching performance from Brandon McCarthy, like last night's by Bronson Arroyo should do it." And, what did we get?

Careful, boys. We might start getting used to these kinds of outings from our rotation: anything less than seven shutout innings from Wade Miley tomorrow will be disappointing. Both pitchers faced the minimum in the first, but Miguel Montero then dispatched his fourth bomb of the season, 425 feet to right-center. That was one of his three hits on the night, and while his defense still remains a cause for concern, Miggy's offense is much improved of late. Over the last 14 games, Montero has hit .340 (16-for-47), and has seen his OPS increase by over two hundred points. from .626 to .840.

One out later, this was followed by another hustle double from Chris Owings - one of his three hits on the night - and Alfredo Marte then slapped the ball just inside the right-field foul line, allowing Owings to score easily. Marte also started the double-play which helped stop a potential rally in the Padres third, catching a ball in left-center leaving the bemused runner from first standing on third as he was doubled off. Thanks for the TOOTBLAN, Padres! In the top of the fifth, Paul Goldschmidt almost got himself a long ball as well, but was robbed by a leaping catch, right at the fence, by San Diego's Cameron Maybin.

However, that was only a temporary respite, as the next three batters singled, Owings driving in Miguel Montero with the last of them. Admittedly, he had a little help from the Padres here too, who inexplicably cut off the throw from left field, which would almost certainly have left Miggy not just a dead duck, but plucked, roasted and served with an orange up his nose. Mind you, it was worth it, purely for the way in which Montero arrived at home-plate, not so much sliding in, as doing a barrel-roll across it. An infield single by Marte in the seventh, completed the Diamondbacks scoring for the night.

Meanwhile, McCarthy was being efficient and effective, needing only 88 pitches to get through seven innings of Padres' offense. A lead-off double in the seventh was about the closest San Diego seriously came to threatening, but that runner was stranded there. McCarthy could certainly have gone longer, but was lifted for a pinch-hitter, with the final line given above, and comfortably in line for his first victory of the season. Nervousness did ensue, as LOOGY Joe Thatcher was inexplicably used to face a pair of right-handers in the eighth. Both singled, but Brad Ziegler came in and did what Brad Ziegler does, getting a double-play on his way to another zero.

The Diamondbacks came within two outs of their first consecutive collective shutouts in almost three years - we beat Washington 4-0 and 2-0 on June 3-4, 2011. But J.J. Putz wasn't having that. allowing a single and an RBI double. My fantasy team thanks him for this, as that created a nice, two out save situation for Addison Reed. My fantasy team was much less impressed with the two-run homer Reed immediately allowed, followed by a double and a (semi-intentional) walk, He finally got former Diamondback Xavier Nady to fly out to Gerardo Parra, with the tying run in scoring position. Reed's ERA is now above four; not exactly the lock-down closer we were promised.

Still, the bottom line is, the Diamondbacks pulled out their third consecutive win, though we're still looking for our first blow-out victory. The team's struggles with runners in scoring position were less prevalent this evening, as we went 3-for-10; certainly a lot better (and clearly more productive) than the Padres' 1-for-9. As well as Montero and Owings' three-hit nights, Goldschmidt and Marte had a pair of hits apiece and Aaron Hill was on base three times, with a hit and both of Arizona's walks. 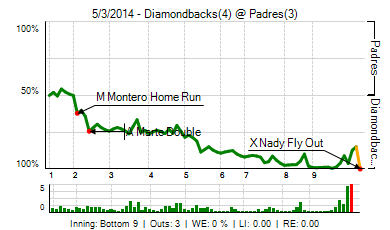 Comment of the night to preston.salisbury, who will be guest recapping tomorrow's game and is clearly warming up his snark:

Tomorrow, it's the same two teams, at the same location, and hopefully the same result. It's actually the first time this year we've come into a series finale with even a chance at a sweep, in our 11th series of the year. In fact, you've got to go back to Aug 26-27 last year - twenty or so series ago - to find the last time the Diamondbacks took the first two games of any set. Coincidentally, that was also against San Diego, although at Chase. Wade Miley will face Tyson Ross, and if we win, it'll be our first sweep since Aug 12-14 against Baltimore.