Josh Collmenter and the Diamondbacks' pitchers found themselves in a couple of sticky situations throughout the game, but buckled down when it mattered to secure the first win of the road trip.

Share All sharing options for: Diamondbacks 3, Mets 2: The Great Escape

Josh Collmenter was by no means spectacular, but he got the job done on a rainy day in New York, snapping the D-backs’ three-game losing streak. It was a bit of a roller coaster ride for Collmenter out on the mound; he’d go an inning where the execution just wasn’t there on pitches, then come out the next and retire the side with ease. At the end of the day, the right-hander threw six innings and only allowed two runs along the way.

The D-back offense struck early in the game with a couple of seeing eye singles, but couldn’t seem to get anything going later on. There was a grand total of 28 players left on base in the game between both teams, and the Diamondbacks had 15 of those.

Arizona got on the board first in the second inning with an RBI single off the bat of Martin Prado. One batter later, Cody Ross singled in another to extend the early lead to two.

In the ensuing offensive half for the Diamondbacks, Paul Goldschmidt reached base on an error by Wilmer Flores and was then advanced to second when Aaron Hill was hit by a Zack Wheeler pitch.  Prado then stepped up and singled to left to bring home his second RBI of the day.

Meanwhile, Josh Collmenter was busy narrowly leaving jams, and this tweet pretty much sums that up. Poor Lucas Duda:

SPOILER ALERT, he left two more on in the eighth; that's a rough game.

After Collmenter gave up a David Wright homerun in the fifth, Mr. Snakepit brought up a pretty savvy idea that Gibby should consider:

I don’t think I disagree with him.

Even after the solo shot, Collmenter buckled down and retired Curtis Granderson to end the inning, then came back out with another perfect 1-2-3 half -- his third of the game -- in the sixth.

Despite only throwing 90 pitches up to that point, Collmenter was removed in favor of Evan Marshall heading into the seventh inning. It’s hard to argue with the move, as you’d think that by the third/fourth time around the order, the Mets’ hitters would have a better idea of what Collmenter is trying to do. According to baseball reference, while the sample size is smaller, his performance on pitches 76-100 is relatively worse than the 75 before (as you’d find to be the case with most pitchers).

With that nearly meaningless stat said, Wheeler took the mound and got himself into a little bit of trouble, walking two Mets with just one out recorded in the inning. The teetering point of the game came when Marshall dialed up a double play to escape the jam with the lead still intact.

Yet, once again in the eighth, the bullpen added stress to the ball game. Ziegler -- the culprit this time -- had a very similar inning to that of Marshall’s seventh. With two runners on and one out, Ziegler forced both Duda and Flores to fly out to left to end the inning unscathed.

Thankfully, for my underwear's sake, Addison Reed came in and threw a flawless ninth to seal the deal. 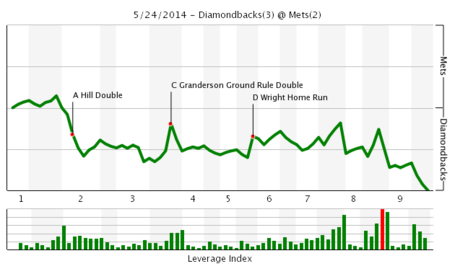