"It's perhaps not the most promising match-up for Arizona tonight." That's what I wrote earlier, and noted in the preview that a rookie with one start above Double-A was going up against the reigning Cy Young champion. "But," I went on, "That's why they play the games."

And it's a good job they do, because this was among the most glorious and unexpected treat I've had as a Diamondbacks fan for a long time. Comparisons were drawn to Game 6 of the 2001 World Series, where the team teed off on Andy Pettitte and the Yankees, and I can see why. I'm only here because scheduled recapper Ross had a family get-together - though, truth be told, I think he saw the pitching match-up and decided it was either that, or take a page from ish95's playbook, and pour hot fat over his typing hand. I even offered it to Turambar, but he was apparently getting his drunk on early, in likely anticipation of another mauling from the Dodgers.

Things started innocuously enough, with the sides exchanging zeroes in the first, though Chase Anderson put the lead-off man on second after a single and wild pitch. Still, he settled down, facing the minimum in the second, with the help of a double-play. Things started innocently enough with a Cody Ross walk, then a Martin Prado single gave us hope we might actually, maybe, possibly score a run against Kershaw. Alfredo Marte struck out, and I prepared a scathing Tweet about what do you expect will happen when you have Marte, Cliff Pennington and Tuffy Gosewisch hitting back-to-back.

Then, something utterly unexpected happened. Or rather, some things. A two-run triple from Pennington. An RBI single by Gosewisch. After a sacrifice by Anderson, an RBI triple by A.J. Pollock. A Chris Owings triple. A Paul Goldschmidt double. A balk, LOLOLOLOL. Another walk to Ross, his second of the inning. And that was it for Kershaw. He had gone 48 consecutive starts without allowing more than five runs in total, and here he was trudging off the mound like a disconsolate Amish farmer, on his way to conceding seven in one inning, after Prado's second single scored an inherited runner. Marte, embarrassingly, got to make the first and third outs for us!

So, seven runs up, this was a laugher the rest of the way, right? Not so fast. Anderson let the Dodgers get on the board with a two-run bat-flip in the third, but the Diamondbacks got those runs back in the fourth, on an Owings' home-run and Prado groundout. So, still seven runs up after five, but things got a lot more nervous in the sixth. Anderson's night was ended by a three-run homer off the bat of Carl Crawford, to make it 9-5 to Arizona. As in his debut, Anderson lasted 5.1 innings, but with a rougher line: five runs on seven hits and two walks, with two K's, but most of that was perhaps Gibson leaving him out there one batter too long.

Worse was to follow, as Evan Marshall came in, and the first three runners all reached base, in part because of an error by Marte. Two scored, and somehow, from being seven runs down at the start of the inning, the Dodgers suddenly had the tying run at the plate with one out. Marshall escaped further damage, and a Prado double restored a three-run advantage for the Diamondbacks. But Los Angeles wasn't going away quietly, and the first two runners reached in the seventh, again bringing the tying run to the plate, this time with no outs. However, Joe Thatcher and Brad Ziegler weaved their way out of trouble there.

Just as we were settling in for a nervous final six outs, the offense showed up again. Goldschmidt cranked a three-run homer and Gerardo Parra made it 14-7 with an RBI double. Then, in the eighth, back-to-back homers by Eric Chavez and Owings chased the last remnants of the Dodgers' bullpen, and they turned to back-up catcher Drew Butera for mop-up duty. Goldschmidt took full advantage, cashing in for his fifth multi-homer game, and first of the season, a two-run shot. That also set a new franchise record for runs in a game, surpassing the old mark of 17, last done on September 28, 2002 against the Rockies at BOB.

Needless to say, a metric oce-lot of offense to report here, with 21 walks and six hits. Slots #1-4 combined to go 12-for-18 with five walks, ten RBI and four home-runs, with Goldschmidt and Pollock both having four-hit nights. Owings and Prado each had a trio of hits, while Ross reached base safely four times, on a hit and three walks. Marte was the only starter not to have two hits or two walks. It also ended, in no uncertain style, the streak of 52 consecutive games without a blowout (margin of 5 or more) victory, which dated back to September 22 last year. That ended up three short of the club record, set in 2004-05. 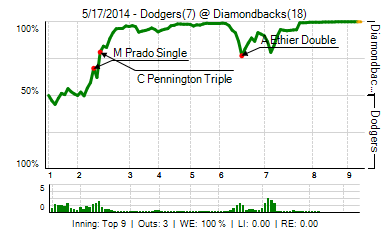 "I've learned that you shouldn't go through life with a catcher's mitt on both hands; you need to be able to throw something back." --Maya Angelou

It's the same two teams again tomorrow afternoon, and we'll be hoping for much the same outcome! It's a familiar face going for the Dodgers, in Dan Haren, while the Diamondbacks will try to take the series behind Josh Collmenter. Who knows what might happen, because after all... You can't predict baseball!