It was Elvis Night at Chase Field. Much like the King himself, the night ended up with this game lying, bloated and dead, next to the crapper.

There's a certain point where this goes beyond mere defeat. It almost seems to have a psychological component, which dooms the Diamondbacks, almost before they take the field against the Dodgers. The only time it seemed like this might be a genuine contest tonight, was in the second inning, after Aaron Hill singled and A.J. Pollock walked, to put men on first and second with no outs. Chris Owings tried to bunt, but only succeeded in popping up to third, and Ender Inciarte hit into an inning-ending double-play. I could virtually hear the hissing sound of our hope deflating through the open roof at Chase Field.

And so it proved. Until the Dodgers made a charitable contribution of bringing Brian Wilson in to pitch the ninth inning, we managed only one further at-bat with a runner in scoring position, and didn't do anything there either. We had three more AB with RISP in that ninth, but didn't manage to get anything done either. Things looked hopeful after Miguel Montero legged out an infield single to put men on the corners with one out, but the Dodgers challenged the play, and the call we overturned, Miggy being ruled out. There should be some mercy stipulation, about not being allowed to challenge plays when you are up by seven runs, and it's the ninth inning.

Before that, we had to get through eight innings of Zack Grienke, and that went about as well as the last five times we've tried. Actually, it went a good deal worse, as we were held to five hits, all singles, and there were a lot of ugly at-bats. Paul Goldschmidt and Miguel Montero, our #3/#4 hitters, combined to go 0-for-7 with five strikeouts on the night. Owings also struggled, going 0-for-3 and making his seventh error of the year. He is now hitting .167 (7-for-42) with one walk this month. Inciarte wasn't any better, and has just three hits in 27 at-base since being called up. Time for someone - anyone! - else, preferably Nick Evans.

Wade Miley didn't look to have his best stuff either, right from the first inning, when he issued a pair of two-out walks before getting Matt Kemp to fly out. When a one-out homer to THAT Dodger gave them the lead in the third, I must confess to feeling less surprise or disappointment than a feeling that the inevitable had started to happen. And so it proved, with Los Angeles adding another pair of runs in the fourth inning, on an RBI single by their #8 hitter, and an RBI double by Greinke. That made the score 3-0, and I don't know about you, but I didn't feel there was much hope of us scoring four runs tonight.

Turns out, we'd have needed a good deal more anyway. Miley did get through six innings, on seven hits and three walks, with three strikeouts, but the Dodgers added another run in the sixth, to knock Wade off the possibility of even a fringe quality start. Any hopes of a comeback were well and truly dashed by Randall Delgado in the seventh inning, who allowed the first three batters he faced to reach, and uncorked a couple of wild pitches helping two to cross home-plate there, plus another in the eighth. He has now allowed nine earned runs in fifteen innings since moving to the bullpen, so it clearly hasn't improved him much. 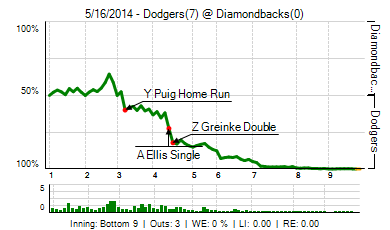 A very quiet Gameday Thread, which is probably only to be expected. Going how the first eight games in this series had gone, I wouldn't have bothered paying attention to this one, if I didn't have to recap it. And you'd have been right to do so. Rockkstarr12 led the way, with JoeCB1991 and Fangdango the only others to pass twenty. Also taking part: Clefo, DeadmanG, Diamondhacks, GuruB, Jim McLennan, Makakilo, MrMrrbi, PR151, TolkienBard, asteroid, hotclaws, preston.salisbury, shoewizard and txzona. Most rec'd comment went to Clefo:

Elvis has left the building

We'll be at it again tomorrow, with Chase Anderson making his second major-league start, and going up against the reigning Cy Young award winner, Clayton Kershaw. What could possibly go wrong there? Hey, I guess stranger things have happened in baseball though, so who knows, eh?