The first time through the order, McCarthy was immaculate. It took him 33 pitches to retire the opening nine batters faced, without allowing a base-runner. If only we'd stopped there.

Share All sharing options for: D-backs 3, White Sox 9: The Art of Falling Apart

I think I've now reached the stage where I've found an emotional balance about the 2014 Diamondbacks. If they win, that's good, because they're the Diamondbacks and I'm a Diamondbacks fan. But if they lose, that's good too, because it brings us one step closer to the inevitable clearing of desks, after which the team can begin the rebuilding process. It's a great deal more low-impact than, say, fandom last year, where we had to watch with ever-increasing angst as the Dodgers reeled off a historic run to whiz past us. Perhaps there's something to be said for apathy. I can't be bothered to find out...

There was a brief glimmer of hope at the beginning of this evening's proceedings, because it looked like Brandon McCarthy would continue with his run of solid outings, which had culminated in seven shutout innings last time out, in San Diego. He was thoroughly effective the first time through the order, and was given a two-run lead in the third inning, as Gerardo Parra launched his third home-run of the season into the right-center bleachers, scoring Cody Ross, who had got the Diamondbacks first hit of the night earlier in the inning. It looked like it could be an evening where good starting pitching and enough offense, combined for another Arizona victory.

Fate had other plans. The second time through the White Sox order immediately proved stickier, an eight-pitch at-bat ending with the first hit, a double to center. Three batters, three hits and four pitches later, the lead was gone. With runners on first and second, and still nobody out, McCarthy K'd former D-back Adam Dunn, but another hit loaded the bases, and Alexei Ramirez emptied them with a grand-slam. Three more hits later, McCarthy's night was done. Having gone 0-for-9 the first time through the order, he was 8-for-9 the second time, and was charged with seven runs on nine hits in 3.1 innings.

It was the worst single inning for the Diamondbacks since July 2 last year, when the Mets put up a seven-spot in the seventh, on their way to a 9-1 victory. It was the first time a starting pitcher had been charged with seven runs in an inning since June 6, when Ian Kennedy allowed eight in the fourth against the Cardinals, in a 12-8 defeat. So, there have been worse innings in team history - but I really can't think of many where a pitcher disintegrated quite so quickly. In the space of just 24 pitches, he had allowed nine hits, going from 2-0 with the bases empty (and a perfect game!), to 2-7, with two opposing hitters also on base.

Needless to say, that put a dagger through a) this game, b) the Gameday Thread, and c) my interest in proceedings. So, the rest of this recap will be vague on details, because it's the kind of game where any fan reading probably doesn't care much - having seen the score, picking over the gory details is more a chore than a pleasure - and it's my duty, as a writer, to reflect that ennui. McCarthy was replaced by Trevor Cahill, who escaped the inherited jam with a double-play, and didn't pitch badly in mop-up, allowing a solo home-run (on a 3-0 pitch) over 3.2 innings, on five hits and a walk. Joe Thatcher allowed his obligatory home-run to a right-handed batter in the ninth.

The offense was phoning it in about as much as I am now; after Parra's home-run, we managed only two hits the rest of the way. They came back-to-back in the fifth inning, Ross getting his first extra-base hit of the year, with a double, and then scoring on an A.J. Pollock single. It's only Cody's second run of the season, in his 17th game, and was also his second multi-hit contest. Not really much else to add: Pollock stole his second base of the year, But it certainly wasn't the win for which hotclaws hoped in the GDT (see below). Instead, it has now been 46 consecutive games since we won by more than four (Sep 21 last year). We have had eight such losses over that time.

The Fangraph below is approximate, but I think is an adequate representation of proceedings. 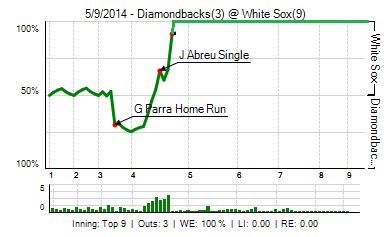 That isn't, surprisingly, the worst WP of a Diamondbacks starter this year. On April 28, Wade Miley netted a -61.0%, I suspect mostly for letting the Rockies take the lead on four separate occasions. Definitely a light GDT, topping out at 169 comments. DbacksSkins and JoeCB1991 were the only members to reach 20, with hotclaws third. Also present: 4 Corners Fan, AzDbackfanInDc, AzRattler, Clefo, Diamondhacks, GODSCHMIDT, GuruB, Jim McLennan, MrMrrbi, SenSurround, Umbrella24, imstillhungry95, luckycc, onedotfive, preston.salisbury, shoewizard and txzona. Comment of the night to hotclaws, even if she didn't quite get her wish...

Hoping for a win without stress please.

I think the mistake may have been not specifying who the "win without stress" would be for... It's back to the same park tomorrow, as Wade Miley takes on Jose Quintana, and tries to avoid giving up any seven-run innings.