When do managers get replaced?

June 27. If Kirk Gibson is to be replaced as manager of the Arizona Diamondbacks this year, history says that is the most likely date. Of course, it might not be that long...

Share All sharing options for: When do managers get replaced?

Looking at the 139 cases since 1980 of a team changing its captain mid-season, the average example happens after 82.5 games, with a winning percentage of .420. For the Diamondbacks, that would translate to following the game on the date mentioned above, with a record of 34-48. Actually, considering our performance to date, reaching that mark would represent a considerable improvement - at the time of writing, prior to Wednesday's series finale against Colorado, it'd be a .500 mark (26-26) going forward.

Even if Gibson lasts that long - increasingly unlikely - it probably won't be exactly this date, as that's one game into a nine-game roadtrip. My instinct leans toward June 23rd. It's an off-day in the middle of a nine-game homestand, and comes at the end of what could be a brutal stretch of the schedule: ten games against the Dodgers, Brewers and Giants, who currently have a combined record of 50-30. It would also give whoever replaced Gibson a fairly soft start to their schedule, beginning their tenure with eight games against the Indians, Padres and Pirates, teams who are 34-47 to date. Coincidentally, it'd be after our 79th game, exactly the point at which A.J. Hinch was fired in 2010.

Let's look a bit more at what the historical record tells us. A couple of notes first. For this study, I've only looked at the first manager in a team's season. After that, there are sometimes interim managers who take over for a brief period, but I haven't included their dismissals. I also have made no attempt to look at the reasons for a change, simply because researching into the background for 35 seasons worth of dismissals is too much effort. Thus, some of these will not be due to poor performance, but were for other reasons, e.g. health. However, the vast majority were executive decisions.

When do managers get fired?

I expected to see very few managers fired early or late in the season. Chance can play a big part in an early season record: over twenty games, a .500 team will play .300 ball (6-14) or worse about 6% of the time. Even deeper into the season, as we see with this year's Diamondbacks, we get Kevin Towers saying, "We're not as bad as we've played." But there have been 14 occasions where a manager hasn't got to the 30th game. Four came in 2002, where Phil Garner (Detroit), Davey Lopes (Milwaukee), Buddy Bell (Colorado) and Tony Muzer (Kansas City) were all gone inside the first month - and Joe Kerrigan was terminated by Boston during spring training, so isn't included here.

The most recent quick hook was one we'll remember well, as Bob Melvin was fired from the Arizona job after game #29 in 2009, so at least we know Gibson won't become the fastest dismissal in franchise history. As we wrote at the time, Melvin went "from National League Manager of the Year to 'Do you want fries with that?' in barely eighteen months" - and I'm writing this with a Gibson bobblehead for NL Manager of the Year 2011 sitting on my desk. It's particularly interesting to read Derrick Hall's comments in regard to the dismissal of Melvin, because you could virtually copy-paste them in to an interview about this year's version, and they'd be just as relevant.

[In case you're wondering, our record over the last five months, since the start of last June, is now 59-79. When Hall spoke, the team's record since the start of June 2009 was almost identical, at 60-80.] The record for fastest departure is six games, shared by Garner and Cal Ripken of the 1988 Orioles, both of whom were let go after going 0-6 to start the year. It wasn't a great day for Ripken, who had earlier been fined $750 and ordered to perform 100 hours of community service on a drink-driving charge. New manager Frank Robinson then promptly lost his first fifteen games in charge, part of the longest losing streak ever in the American League.

At the other end of the spectrum, there have been a dozen managers terminated in the final 13 games of the season, when it seems kinda pointless. Ozzie Guillen for the 2011 White Sox, and Larry Bowa with the 2004 Phillies, both left their positions when there were just two contests left on the calendar. Guillen requested a release after being refused a contract extension. Bowa was given his cards after being inundated by the media with questions about his job status at the end of the season, and requesting to know sooner rather than later from GM Ed Wade, whether he was going to be terminated.

Here's a graph, breaking down departures into nine even chunks of 18 games apiece: 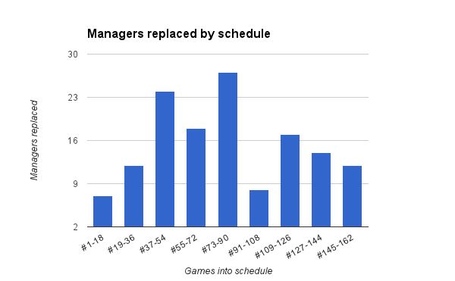 What's interesting, is the sharp drop-off, just after the half-way point. From game #93-110, there have been only seven departures in 34 seasons, so if Gibson is able to make it to July 10, he should be good into August. That may well be the reason for the moratorium on firings. As you approach the trade deadline at the end of July, I can see why teams would not want to be dealing additionally with a new face in the dugout.

How are their teams performing?

Unsurprisingly, "not very well" is a good summation, with just 14% (19 of 139) of departures taking place when the teams in question had a winning record. The tendency there seems to be for such dismissals to take place later in the season: the only case of a manager with a winning record being let go before the 68th game, was the 1985 Orioles, who parted ways with Joe Altobelli when he was 29-26. This seems to have been to open the door for the return of local legend Earl Weaver, who had also managed Baltimore from 1968-82 However, he fared no better, putting together a record of 53-52 the rest of the way.

The all-time high is Larry Dierker's 84-51 with the 1999 Astros - but performance wasn't an issue. Dierker suffered a grand mal seizure, necessitating his replacement for 27 games, by bench coach Matt Galante. The "true" record holder is Billy Martin, who wore out his welcome with George Steinbrenner, despite a 40-28 record, during late June 1998, ending Martin's fifth spell in charge. It's likely no coincidence the runner-up is another Steinbrenner victim, Gene Michael in the strike-shortened 1981 season. Michael told the owner he was fed up with threats of dismissal, and Steinbrenner should either get it over with or shut up. Guess how that went. 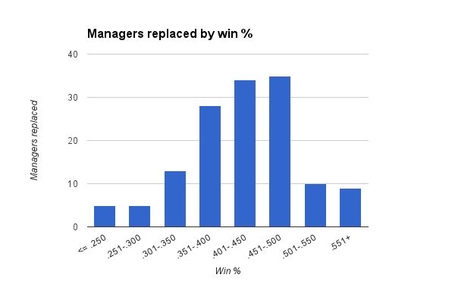 It's a bit harder to tell anything significant from this graph because, obviously, most teams will tend to be grouped around .500. We'd probably need to figure out the percentage of teams with records, say, between .351 and .400, and figure out how that compares to the percentage of dismissals. However, it does definitely show what we mentioned above - that a winning record is powerful, and probably the best prophylactic against sudden unemployment.

There are some wide variations among teams, with some seeming a lot more likely to change horses mid-stream. Leading the way over the time in question (since the start of 1980, in case you'd forgotten) are the Seattle Mariners, who have done so nine times. If I'd gone back a few more years, they would have had some competition. Between 1975 and 1990, the New York Yankees had the same manager for the entire season only seven times in 16 years - between June 1988 and June 1990, they had five different managers. They've calmed down a lot since though, and haven't fired anyone mid-campaign since.

The most stable teams are the Pirates and Rays, with one each - though the latter have been around for less than half the period studied. The sole Pittsburgh victim since 1973 was Lloyd McClendon in 2005. However, the longest current streak belong to the Twins, who haven't fired anyone mid-season since Ray Miller in 1986, and the Giants (Jim Davenport, 1985). The Diamondbacks have done it three times (so far...): Bob Brenly in 2004, Bob Melvin in 2009 and A.J. Hinch in 2010. The only manager we've ever had who was not terminated in-year, was Buck Showalter, given his marching orders the day after the end of the 2000 season.* 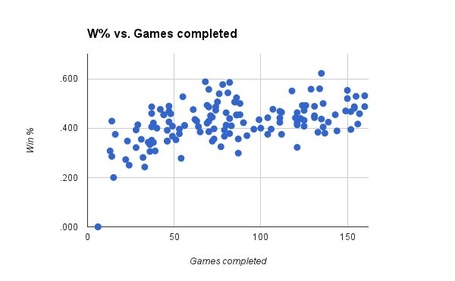 * And maybe Wally Backman, who was pretty much fired before he could sit down.

Next Up In MLB