Turns out Sunday's victory over the Rockies was more a blip than any sign a corner had been turned. Another awful game from our starting pitcher condemned the D-backs to their eighth loss in the first 10 games. We're also 0-4 in Opening Days.

Trevor Cahill took 21 pitches to retire his first batter, and by the time he did so, the Giants were already two runs up. He walked the lead-off man and then, inevitably, it was Brandon Belt who took advantage after Cahill missed his spot by about the width of McCovey Cove. That ball didn't come back. A single followed, but our best friend of late, the double-play, helped prevent further damage.But Cahill's lack of control resulted in a constant struggle for him this afternoon, particularly as far as locating his sinker. Neither he nor Miguel Montero seemed to have much idea of where it was going, and Cahill fell behind a lot of batters.

We put the lead-off man on in the first, Gerardo Parra singling, but he was then caught stealing on a botched hit-and-run with Aaron Hill. We went one better in the second inning, Martin Prado singling and Montero then being hit on the calf by a 55-footer from Hudson. Arizona then took advantage of bad San Francisco defense, as Mark Trumbo hit into what should have been a double-play, but the pivot man threw the ball into the dugout, allowing Prado to trot home for our first run. Chris Ownings and A.J. Pollock couldn't move Trumbo from second.

Cahill's struggles continued in the third innings, as the Giants scored three more in the third, on four hits and a stolen base. Although the Diamondbacks put men on first and third with no outs in the top of the fourth, on hits by Paul Goldschmidt and Prado, all they could manage was a sacrifice fly by Montero, to make the score 5-2. Cahill's day ended with two outs in the fourth, his final line being five runs allowed, all earned, on eight hits and a walk, with a trio of strikeouts. It's the fourth time in ten games this season that the Diamondbacks starter hasn't been able to get through five innings.

Ryan Rowland-Smith came on to bail Cahill out, but it took him 39 pitches to get four outs. By the time he had, San Francisco had scored two more runs, though it has to be said, those were less on Rowland-Smith than Trumbo, who butchered another fly ball in the outfield, not coming within ten feet of what should have been an out. I think we need to start counting the plays which are blown so badly they can't even be scored as an error, but sure are GIFworthy. Operation Trumbo Drop: 2. On the two-run hit which followed, there was also a case, on replay, that Miggy tagged the second runner as he crossed home, but Kirk Gibson stayed in the dugout, perhaps pouting.

And, I should point out, he failed to homer today. I was assured this happened every day or something... That gave the Giants a five-run cushion through five innings, which was easily more than enough for them to cruise to victory the rest of the way. The Diamondbacks got their final run across in the eighth inning, Tony Campana whizzing round the bases with a lead-off triple as a pinch-hitter, and coming home to score. But there were to be no late heroics for the Diamondbacks today. Indeed, he was the only base-runner we had after Montero lined into a double-play to give San Francisco the last two outs of the sixth inning,

Bright spots are kinda hard to find in this afternoon's sorry display. Prado did have three of our seven hits, continuing his steady improvement - over his last four games, he has gone 8-for-16, raising his batting average from .120 to .268. After Rowland-Smith, the bullpen was actually pretty effective, albeit in a series of low-leverage situations. Oliver Perez, Brad Ziegler and J.J. Putz combined to retire all nine batters faced, over three hitless innings, with no walks and six strikeouts. Putz was particularly impressive, striking out the Giants' side in the eighth. But the hole dug by Cahill was just too much to overcome. 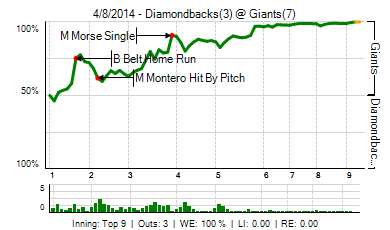 We will reconvene tomorrow night - which should help reduce the balls leaving the park at least - with Bronson Arroyo taking on Goldie's personal batting practice pitcher, a.k.a. Tim Lincecum. So, there'll be that to enjoy, at the very least.