Once again the Diamondbacks' pitching proves to be the shortcoming of the 2014 club as they fall to 1-7 on the season, the worst start in seventeen years.

As Jim alluded to in the preview, the D-backs were in trouble of getting off to their worst start in franchise history with a 1-7 record. But everybody can exhale now as we were able to...just kidding, Arizona blew an early 4-0 lead en route to a 9-4 loss.

A.J. Pollock and Aaron Hill both started off the game with strikeouts making every fan think, ‘here we go again.’ But then Paul Goldschmidt drew a walk with a great at-bat after falling down 0-2. The ensuing hitter was Martin Prado and he too worked the count to full, forcing Jorge De La Rosa to serve up a double down the left field line to score Goldy from first. And the D-backs were on the board first, hallelujah! The D-backs were able to sustain a two-out rally and forced De La Rosa to throw 42 pitches in one inning.

Brandon McCarthy got out to a good start, getting out of the first inning unscathed, which seems rare for the D-backs at this point (although Charlie Blackmon did nab another single, extending to 7-for-7 in the series).

In the top of the second, Chris Owings got on with an infield single to lead it off. He then stole second and scored after a weak McCarthy grounder got by Justin Morneau, extending the lead to two. It looks right now as if Gibby and the whole crew made the right choice to go with Owings (I know it’s early but he’s playing extremely well).

After a quick 1-2-3 inning for McCarthy, the D-backs got back to the plate and wasted no time to add to the lead. Martin Prado reached, and then Trumbo stayed hot with another bomb, going oppo-taco for his third of the year making it a four-run game.

Both McCarthy and De La Rosa went out and put up zeroes in the bottom of the third and top of the fourth, with the D-backs finally able to retire the AMAZING Charlie Blackmon.

The Rox got on the board in the bottom half of the fourth with a two-run shot off the bat of Michael Cuddyer that barely squeaked over the right center fence. Two batters later, Nolan Arenado hit a solo shot to center which Pollock seemed to have a beat on, as he got his glove on it. Yet, he couldn’t haul in, and that diminished the lead to just one run. Clearly Arizona has problems with holding four-run leads.

We were able to chase De La Rosa (I don’t like typing his name) after he eclipsed 100 pitches with just four and a third under his belt when Goldy drew another walk; Tommy Kahnle was his replacement and he finished the inning with a zero.

And then the wheels fell off yet again.

After Blackmon reached base yet again, he stole second to get into scoring positon. DJ LeMahieu then singled to right field, bringing him home to tie the game up. The ensuing at-bat saw CarGo single to the gap to score LeMahieu from FIRST, even with Parra throwing from the outfield.

The D-backs then went quietly in the top of the sixth, only to see the Rockies add another in their half off of another home run from Arenado.

AJ Pollock led the seventh off with a ground rule double, but Hill, Goldy and Prado weren’t able to get him as Adam Ottovino shut them down. Goldy didn't come up to the plate again, effectively ending his hitting streak at 26 games.

Colorado was able to tack on one more in their half of the seventh on a 12th pitch sac fly from LeMahieu which scored Brandon Barnes.

Will Harris took the mound in the eighth, and once again, it wasn't pretty. He gave up three doubles in one inning, allowing another two runs to come across, driving the knife into the hearts of all of us. Harris' ERA is sitting at a cool 13.50 after 4.2 innings pitched. That's not very good.

The D-backs went quietly in the ninth, capping off a 2-for-20 finish from the offense to end the game. 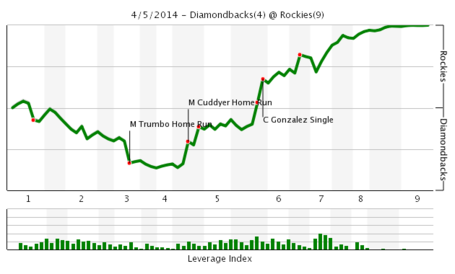 Something needs to happen, a 1-7 start with this roster is unacceptable. I'm not saying that it's the most talented team, but c'mon. If it doesn't turn around in a hurry, seats will be heating up.

Wade Miley squares off tomorrow with Brett Anderson tomorrow in the final game of the series as Arizona tries to salvage something positive before heading to red-hot San Francisco for a three-game series.