As was not entirely unexpected, the offense showed up, and the starting pitching stayed home for the Diamondbacks last night, as Wade Miley dropped the first of the series against the Rockies at Chase, Arizona losing their third game in a row.

Share All sharing options for: SnakeBytes, 4/29: Starter's turn to suck

[AP] Miley, D-backs rocked in series opener "They battled and we got outbattled," Gibson said. "Those guys, you look up and down the board at their averages and we knew coming into the game they are swinging the bats very well." "It was weird. Feeling-wise, I felt really good tonight," Miley said. "Those guys are swinging well right now, and I didn't get the job done. It was on me."

[AZ Central] Diamondbacks drop series opener against Rockies - Parra's second-inning solo homer off Colorado starter Franklin Morales was a bit of an oddity. It was Parra's first homer off a lefty since Oct. 1, 2012 and, almost unbelievably, the first homer by a D-Backs left-handed hitter off a lefty since catcher Miguel Montero went deep against St. Louis' Jaime Garcia on April 2, 2013.

[Dbacks.com] Miley unable to cash in on D-backs' support - "You've just got to keep going," first baseman Paul Goldschmidt said. "If we put it together and consistently play well every day, the wins will start coming. It's been a little bit off obviously. You can't go out there and try to do too much or put too much pressure on yourself. You've just got to try and execute and do the little things and do everything we're trying to do and have some results, some wins."

[ArizonaSports] Diamondbacks can't keep up with Rockies' onslaught of offense - Three times -- in the third, fourth and sixth innings -- Miley failed to put up a zero a half-inning after his team had tied the game. Cody Ross went 0-for-4, dropping his batting average to .088 (3-for-34) since being reinstated from the 15-day disabled list on April 18. The Diamondbacks committed their 26th and 27th errors of the season, the most in baseball.

[AZ Central] Diamondbacks look to better prevent stolen bases - Manager Kirk Gibson thinks Montero isn't throwing quite as well as he has in past years. Some of his throws have been off, resulting in four errors. His career high is 11. "Obviously, they haven't been good throws," Montero said. "I've got pretty good middle infielders, and if they're not able to handle those throws, it's because they're bad throws, period. Other than that, I think we've got to do a better job holding the runners, giving me a little bit of a chance to throw them out."

[ArizonaSports] Diamondbacks' struggles: Follow the money - Ownership has been willing to spend, but unfortunately its money has not been spent particularly wisely. And too few of the team's recent trades -- many of which were controversial at the time -- seem to have worked out in their favor. It's all left the franchise in a bad spot. With the season clearly not going as expected, continued struggles will likely lead to changes, both in the coaching staff and with the roster.

[dbacks.com] Even as velocity varies, Putz still force in bullpen - "I don't really put too much stock in what people say outside of my teammates and the coaching staff," Putz said of people who may have doubted he could still be effective. "I know who I am, I know what I've done and I know what I'm capable of doing. That's why guys have track records." Putz has been getting it done with less velocity this year. "I don't know what the answer is to the velocity thing," he said. "I know it was down last April, too, and it crept back up. I've never thought of myself as a thrower even when I threw 96 miles per hour. I always saw myself as a pitcher."

[South Bend Tribune] Silver Hawks: Captains prevail in 12th - Interesting piece on our pitching in South Bend, and some discussion perhaps of why players are being cautiously advanced. "

[ArizonaSports] Fans anticipate sweeping changes with D-backs - A poll said the 62% of fans think neither Kirk Gibson nor Kevin Towers will be with the Diamondbacks on Opening Day next year. Towers will still be here according to 15%, and Gibson by 36%. [No, those numbers don't add up to 100% because 12% said both...]

[AZ Central] Ziegler hopes for another decade in MLB - "I'd love to play another eight to 10 years, pitch until I'm in my mid-40s and tell LaTroy Hawkins he's got nothing on me. No question it would be fun to have a 15-year career. I want to get to the point where hopefully I'm still pitching effectively and I get to decide when I'm done and when I don't want to put the work in anymore, rather than having the game tell me."

[FOX Sports] Hahn busier than ever 3 years after spinal cord injury - As graduation season approaches at Arizona State, there's surely a good number of seniors caught up in the hustle and bustle of their final undergraduate days. It's unlikely, though, that any of them are as busy as Cory Hahn, who has so much going on that it's amazing he finds time for an interview.

[dbacks.com] D-backs president Derrick Hall launches prostate cancer foundation - D-backs president Derrick Hall believes that he was diagnosed with -- and so far spared from the ravages of -- prostate cancer for a good reason: to live the rest of his life helping other victims. "We all believe things happen for a reason," Hall said on Monday. "I believe one of the reasons I was diagnosed was so that I could spread the word and educate others. Nothing has changed. This gives me yet another larger platform to drive awareness and educate men. It's our breast cancer."

[ESPN] Harper will get surgery, out unitl July - "Bryce Harper will undergo surgery Tuesday to repair a torn ulnar collateral ligament in his left thumb and is expected to be out until at least early July, according to multiple sources. Harper, 21, injured his hand during a head-first slide into third on a bases-clearing triple in Friday's victory over San Diego." Shouldn't the Giants be demanding a rule change to prevent this kind of easily-avoided injury?

[If you have trouble viewing the below directly, here's the link.]

Dear god, how does anyone ever get a hit off a knuckleballer?

And finally, guess who was cited on last night's Rachel Maddow show on MSNBC, as they were discussing Marge Schott? 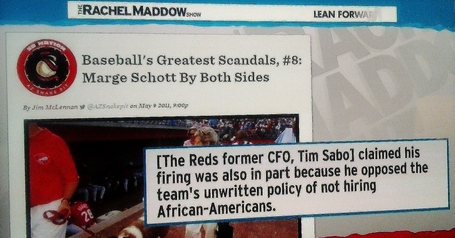