The D-backs won their third game in a row behind a solid performance from Josh Collmenter and Aaron Hill's three RBIs.

Share All sharing options for: Diamondbacks 5, Phillies 4: Waking the Dead

The defense and bullpen tried their hardest to lose the game in the last three innings, but the D-backs came away with a W on Zombie night to extend the winning streak to three games.

Although four out of the first six leadoff batters he faced reached safely, Josh Collmenter went six innings strong giving up just four hits and no walks on the night to out duel Philly’s Roberto Hernandez. Collmenter is the first Arizona pitcher to throw six scoreless since Wade Miley last year on September 24.

The D-backs got things started in the bottom of the fourth on an Aaron Hill two-run home run to left field. It should be noted that this happened right when Tolkien Bard said:

While Hernandez escaped the inning without giving up another run, he was already up to 72 pitches after just the four innings pitched.

We tacked on two more in the following inning and what a beautiful thing offense is, especially at home. Goldschmidt singled home Gerardo Parra to extend the lead to three, and two batters later Hill stayed hot with a ground rule double for his third RBI of the night. The hit could’ve scored both Goldy and Montero had it stayed in the park, but it looked like one of the fans stuck their arms over the wall and took it back with them.

Regardless, the D-backs had a four-run lead after the hit. Collmenter then went out and threw up another zero against the top of the order to finish his night on a high note.

And then the bullpen happened.

Joe Thatcher came in and got Ryan Howard out, but then allowed the next two to reach. Gibby pulled him for Randall Delgado who gave up a seeing-eye single to load the bases. Philly got on the board with a bases loaded walk.

And then Cliff Pennington botched what would’ve been an inning ending double play. Two scored on the play to quickly make it a one run ball game. Delgado at this point had actually not thrown that bad considering the results. On the ensuing hitter, he forced what should have been yet another DP, but Pennington and Hill couldn’t turn it fast enough to get the speedy Revere.

Delgado was able to get a fly ball to left (thank baby jesus it wasn’t a grounder to short) to end the inning somehow with the lead still intact.

The D-backs went quietly in the seventh. Oliver Perez came in and – obviously aided by his ripped sleeves – got Utley to fly out to left. Ryan Howard singled and ran Perez from the game. Brad Ziegler came in, gave up a hit to Marlon Byrd that could’ve easily been a double had it not been for Tony Campana cutting the ball off in left. Stevie B in the booth was right on the money with how important that play was. The next guy hit a grounder to first which would have scored Mayberry from third had he been there. Ziegler got the next guy out and left two in scoring position.

AJ Pollock added some cushion to the lead with a solo shot in the eighth, which proved to be the run that sealed the deal. Addison Reed gave up one in the ninth, but shut the door for his third consecutive save. 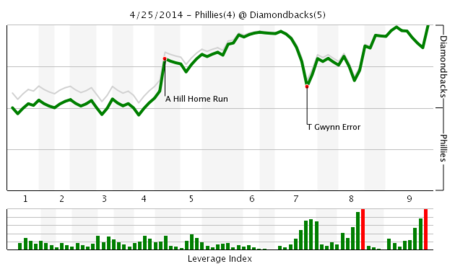 This was my first time covering a win this season, and to be honest it still hasn't hit me yet that they won. Bronson Arroyo takes the mound tomorrow matched up against Cliff Lee to try and extend the winning streak to four.