The Upshot looked at Facebook data to find where different MLB teams are dominant. But does it mean anything, and why doesn't Tucson support the Diamondbacks?

If you've been online anytime in the past couple days, you've probably seen this interactive map from The Upshot, which shows which baseball teams are most liked in each zip code. It's measured by Facebook 'likes,' which seems like it could be arbitrary and incomplete, but is probably good enough for a pilot study.

Brief aside about the data collection issue, since I'm sure there'll be a long comment chain about it: we don't have any information about how many people Liked teams, so we can't even be certain it was a good amount (though it's probably in the millions). Additionally, Liking a team doesn't necessarily indicate primary fandom, as a person could easily like all 30 teams if they desired. The Upshot makes no indication if they filtered out multi-fans. Also, it's probably reasonable to assume that Facebook users in general skew young, and perhaps younger than the overall demographic of baseball fans. Although Facebook is used by a variety of age groups, we don't have data to tell us how likely it is that a younger cohort will Like something over an older user.

I'm not going to assume the data is perfect, but it lets us, perhaps for the first time, get an idea of fan geography. For our local interests, this lets us better understand the baseball fan makeup in the Phoenix area. You could also use it complain about Phoenix fans, if you're into that sort of thing.

What most people have already noticed from the map is that virtually every team is at least the most like team in its primary area. The Diamondbacks might not have plurality anywhere in Arizona, but at least they're the top vote getter. Some teams, however, aren't so lucky. The Athletics, White Sox, and Mets are all assumed to be the second teams in their respective 2 team markets, but the data shows a pretty stark picture. The A's and Mets can't even win a single zip code, whereas the White Sox, even if they can't win overall Cook County, have obvious and significant enclaves.

There are clear winners and losers, though. Just because your team is the most liked in an area doesn't mean it's the most liked against the slate. The Diamondbacks only get 30% of the Likes in Maricopa and Pima counties, which means that 70% of Like for MLB teams in those counties were for the other 29 teams. Contrast this with the Cardinals, who have a commanding 83% tally in their area.

Let's generally define market winners as teams with more than 50% of the support of their market. Losers would command 50% or less.

And now the losers

Most of the teams would be in the winner range, which means by these limited Facebook metrics they at least have a majority of supporters.

The Diamondbacks, although at least the most supported team in their market, are from getting a simple majority, let alone a dominate position. This information, though, doesn't tell us much what we don't already know. A common argument, though, is that Phoenix has too many people migrating with prior allegiances, and this hampers the D-backs ability to draw and maintain a fanbase. One way to measure this might be to compare a team's fanbase % against it's population change, the idea being that counties with population necessarily have more people not originally from there, diluting the longtime fans. 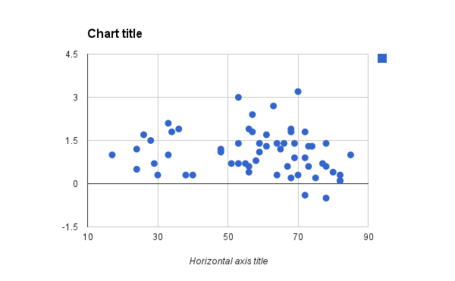 There appears to be a very slight relationship lack of county level growth and MLB team loyalty, but it's such a weak relationship it's barely there. Now, this information could be further purified by figuring out how many people actually stay in a particular county over a 5 or 10 year period (Phoenix is notorious for not only strong overall growth, but having tremendous turnover, sometimes cited as 3 in 4 new residents leaving within a few years).

If there's anything particularly interesting or new, at least for us Diamondbacks fans, is that Pima County, home of the Old Pueblo, has a loyalty of 24%, over 10 points lower than Maricopa County. Part of this could be be weighed down by a large university, but University of Arizona is a state school that has 69.4% of its undergraduates from in-state. Who knows where these kids were from before they graduated high school in Arizona, but it's doubtful that 9,152 undergrads are pulling down Pima County's number that much. Instead, Tucson simply doesn't support the D-backs that much.

The usual caveats have to be stressed here again: Facebook data is likely to be not representative, and you'd have a hard time seriously arguing that Liking a team makes you a fan. I don't have the Diamondbacks Liked on my Facebook profile, does this mean I'm not a fan? No, it means I don't care about this particular thing.

Still, it does suggest that the Arizona in the Arizona Diamondbacks hasn't been very successful. The next highest populated county, Yuma County, is even worse at 20%. The team has spent 16 seasons on an Arizona strategy, and it's hard to say it's been particularly successful, though I can't imagine it costs the team much. Part of the problem is just simple numbers: Maricopa County has over 60% of the population of the state, and the next most populated, Pima, doesn't even reach a million people. Population drops off a cliff when you get to even 3rd most populated. Yuma County has barely 200,000 people.

It's hard to put too much stock in any of this, though, as the data presented by The Upshot isn't even slightly scientific, and my look at it attempted a certain amount of rigor, but isn't complete, either. I'm sure the SBNation Overlords would like me to encourage people to go Like both the team pages and specific blog pages, but you can think for yourself.

Let's file this away in interesting, but not that telling. I do wonder, though, about the Pima County thing. What's the deal, Tucson? I'm not from there, but it seems like if there's any place in Arizona that would be most supportive, it would be Tucson. If you're from there, please, hit up the comments and give your insight.