You don't really want to read a detailed account of this one, do you? Because you're not going to get one here. Tonight, instead, it's a Very Special Recap - I was going to make it a musical version, but Joss Whedon isn't returning my calls for some reason.

This will be a different recap. It should have been imstillhungry85, but this afternoon, I got this plaintive little message:

.@AZSnakepit I need an emergency recap. Badly burned myself at work and headed to the doctor now. Can anyone do that for me?

As I mentioned: man, some people will do anything to avoid having to watch the 2014 Diamondbacks. Having already recapped last night, and not really have any interest in watching another fiasco unfold, I figured I'd take the lazy way out and get the Twitterverse to do it for me. Throw out a question each inning, paste the responses = easy recap. Except, of course, the reality is that this has probably taken longer to collate than it would have taken me to write a regular report. However, this was certainly a damn sight more interesting to put together, and many thanks are due to all the Twitters (Twitterers? Tweeters? Tweetees?) who contributed.

1st inning. What are the keys to the game?

@AZSnakepit Believe in the power of friendship, and win it for Skippy the bat boy, currently hospitalized in a fight with scurvy

@hotclaws @AZSnakepit Like that time we won a game. No, wait, that was someone else.

2nd inning. Why do you think our pitching has been so much worse this season?

@AZSnakepit deception only works when people aren't expecting it.

@AZSnakepit Lack of locating pitches, regression, and throwing wrong pitches to the wrong batters. Plus, our pitching was already mediocre.

@AZSnakepit Their uniforms are clean.

@AZSnakepit Tickets are going to be very cheap on Stubhub

Will the team escape this horrible start?

@AZSnakepit I wish I knew. Seems like eventually they HAVE to play better or catch a break somewhere.

@AZSnakepit Yes, because no matter how bad we are we'll start 0-0 next year.

@AZSnakepit Yeah they will get better, but the hole has already been dug, and it is quite deep.

5th inning. McCarthy looks solid... So far... What's your opinion of him this season?

6th inning. Who do you hold most responsible for the wretched start to the season?

@AZSnakepit Towers, for not doing what it took to get a #1 starter. Even with a healthy Corbin this is at best a .500 team, as they showed.

@AZSnakepit Kendrick, for ever hiring Towers

7th inning. What are you looking for in the rest of the season?

This was a good one. Lots of interesting answers here, from the acerbic to the ever-hopeful.

@AZSnakepit a team ERA under 7

@AZSnakepit hoping co-workers like my $10pair of baseball tixs when their team comes to town. I have an Aussie trip to pay for.

@AZSnakepit Maybe a buried chest of pirate gold. But, I mean, not the kind with a crazy curse, obviously.

@AZSnakepit A firesale that keeps the important cogs in our future (e.g. Bradley, Goldy, Parra, etc.)

@AZSnakepit WINNING! its still early, can't give up on the @dbacks!!

And a particularly plaintive:

8th inning. Which is a bigger problem: our hitting or our pitching?

@AZSnakepit The hitting is at least effective at times. Pitching is nonexistent

@azsnakepit Our pitching, our hitters get so overwhelmed by always being down 5-0 that they have to press to score that they try to hard.

@AZSnakepit why can't we get free tacos when the opponents score 6 or more runs?

9th inning. Why are we still here? #Existential #Angst

Yeah, let's end with a deep, philosophical question about the meaning of (baseball) life. And another bumper bunch of answers...

@AZSnakepit because we waited all offseason for Dbacks baseball & there's nothing better to do.

@AZSnakepit We forgot to bring the white flag?

@AZSnakepit .Just waiting (for Godot) for the big rally.

And a certain theme in the next few here...

@AZSnakepit because God hates us

@AZSnakepit Because we still have to recap games, I think.

Thanks a million to everyone who took part, and apologies to anyone who I had to miss out, because this is already longer than a usual recap! Maybe we'll do it again some time. But, on the whole, I'd rather the D-backs started winning, and people didn't feel it necessary to engage in self-harm to get out of their recaps! 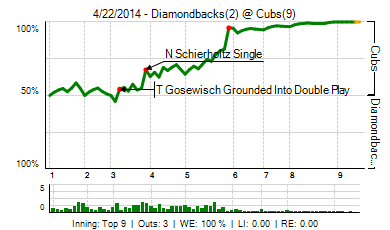 We're back at Wrigley tomorrow, for their 100th anniversary, so be prepared for a different look to the D-backs. It's also a day game, with first pitch a little after 11am in Arizona.