You wouldn't have know these were the two worst teams in the National League tonight at Wrigley Field. Because the Cubs didn't look that bad. The Diamondbacks, on the other hand...

I'm adding the "change on 2010" section as a comparison, because that was the season which saw A.J. Hinch and Josh Byrnes fired at the end of June. I was actually surprised to see that Hinch was there for 79 games, which make me suspect it will probably take something spectacularly bad for Kirk Gibson and Kevin Towers to suffer the same fate before then. However, after another loss tonight, this season is heading deeper into "spectacularly bad" territory, and further away from the point where "small sample size" or "tough schedule" are even remotely credible excuses.

To me, both Gibson and Towers are culpable for the horrific start. This is largely the same roster as last year, but it's clearly playing at a much lower standard, and Gibson is apparently powerless to steer the ship in any other direction. Of course, we can't tell what may be happening behind the scenes, but the effects appear to be almost non-existent. Meanwhile, Towers is responsible for putting together this under-performing roster, and has lumbered the team with several long-term contracts, which have the potential to become an expensive, dangling albatross round the neck of whoever replaces him.

Tonight, the good news is that D-backs were in this one for about 1 1/2 hours after the scheduled first pitch. The bad news: that timeframe includes a 61-minute rain delay. In reality, we were in this until starting pitcher Bronson Arroyo capped his first trip through the Cubs order by allowing a very long three-run homer to his opposite number, capping a four-run inning for Chicago. They had already got on the board with a little bloop that dropped in front of Cody Ross [one wonders how a pre-injury Ross - or even Gerardo Parra - might have caught that one.

Certainly, the Arroyo signing is looking like one of those potential albatrosses (albatrii?): did we really commit to $23 million for two years of this hittable junk? Because. Another embarrassing outing for him this evening, ending in him being lifted with the bases loaded and one out in the fifth -and the pitcher's spot up. Well, Travis Wood was 2-for-2 with four RBI off Arroyo. But, still: I guess $9.5 million doesn't buy you what it used to. In this case, a line of eight hits and three walks in 5.1 innings, with two strikeouts. His K:BB ratio for the year is now 8:7, but I guess he did reduce his ERA tonight - from 9.95 to 9.50.

The offense, meanwhile, was almost stifled. Through five innings we had managed just a pair of Goldschmidt singles. The sixth started off promisingly enough, with Arroyo and Owings singling to start things off, but the inning ended without either man moving from that spot, as the team's struggle with runners in scoring position continued. They came into this game hitting .201 there, and that number will have decreased, having gone 0-for-5 there tonight. They did get on the board with Mark Trumbo's seventh home-run of the year in the seventh, and that was followed by a Montero double, but we weren't able to capitalize on that either.

Anything else of merit or interest? The bullpen was solid, starting with J.J. Putz inheriting a bases-loaded, one out situation from Arroyo and managing to do what Bronson couldn't - retire Tyler Wood. Indeed, he got him to ground weakly back to the mound, starting a 1-2-3 double-play which allowed us to escape the inning. Oliver Perez worked around a hit with a scoreless seventh, and Brad Ziegler continued his resurrection with a hitless ninth. Both benches were also warned after Pedro Strop greeted Miguel Montero with a pitch behind his back with two outs in the ninth - not sure what that was all about, but we may find out tomorrow. That may be the best reason to watch. 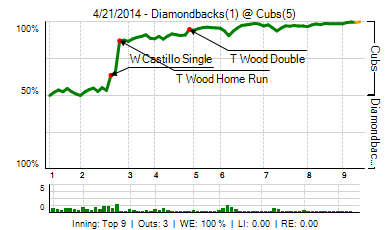 I liked the Bronson Arroyo signing

Same two sides tomorrow night at Wrigley Field, with the same start time of 5:10pm. That'll see Brandon McCarthy starting for the Diamondbacks, and Jason Hammel going for the Cubs. As I write this, the replay of the game has just started on the TV, and Bob Brenly is talking about this spell in the schedule being a chance for the D-backs to make a move. Based on tonight's results, they'll certainly be making a move, but it might not be in the direction we want to see...