I missed the top of the first inning. So, as far as I'm concerned, we scored twice in the bottom half, then Wade Miley, Will Harris and Addison Reed blanked San Francisco the rest of the way. Easy win. That's my story and I'm sticking with it.

Share All sharing options for: Diamondbacks 5, Giants 4: Victory, not vengeance...

Of course, the reality is a bit different, because that top of the first saw Wade Miley get roughed up for four runs on four hits, with Buster Posey putting the Giants on the board first with an RBI single, and D-backs' killer Brandon Belt immediately following up with a three-run bomb. This was not quite what I wanted to see when I turned the television on, and I'll confess I did start working on recap headlines using some variant of "0-4 heaven's sake." However, much credit due to the Diamondbacks, who wasted no time getting back at a very mediocre looking Matt Cain, who was struggling to locate his fastball almost the entire night.

With a right-hander on the mound, Gerardo Parra was hitting leadoff, and immediately repaid Kirk Gibson's confidence by singling, and scoring on a Paul Goldschmidt double into the right-center gap. That extended Goldie's hitting streak to 23 games, and he's now closing in on Tony Womack's 24-game run, currently the second best in team history. [Luis Gonzalez is #1, at 30 games]. It was Paul's first RBI of the season, and he then scored on a Martin Prado single, to cut the Giants' lead to two runs. Miguel Montero then had one of his three walks, tying a career high, and a number he never reached all last season, but Mark Trumbo killed the rally with the first of his two double-plays.

The D-backs had their chances to get closer in the second, after the first two men were on base, but the Giants were able to successfully deke Miley into a butcher-boy swinging bunt, which cost us the lead runner, and helped result in a zero. Trumbo came up in the third representing the tying run, but fouled out to the catcher.. It was the fourth inning which will no doubt be talked about, as there's a case that Bruce Bochy's use of his challenge cost his team the game. It came after A.J. Pollock singled. With two ours, a pickoff throw led to a very close play at first. Bochy had come out to "discuss" plays previously, and this time opted to ask for a review.

The umpires conferred, and took a real long time on the review. However, in the end, the decision stood. I think that was right; while I think Pollock may well have bee out, the replays did not provide "clear and convincing" evidence the original call was wrong, and should be overturned. The denial of the appeal meant Bochy couldn't challenge any further plays, and that was costly, as after a Parra double, what looked like a cross-up between Posey and Cain led to the ball skittering off the catcher's glove. Pollock charged home, and was called safe, though replays showed Cain had apparently got the tag in. But no appeal was possible, so the run stood, making it a one-run game.

The Diamondbacks delivered the tying and go-ahead runs in the sixth, and it was one of last night's goats, Pollock who drove in the former and scored the latter. Chris Owings singled, stole second and that meant he came home on Pollock's ground-rule double. Wade Miley helped his cause out with a single and Gerardo Parra then got the ball just deep enough to the outfield, for Pollock to scurry home, legitimately beating the tag this time, to give Arizona their first lead of the game. But after last night, you sensed that these last nine outs were going to be a morass of stomach-churning possibilities, and so it proved.

Miley settled down admirably after the 1st inning awfulness. In fact, having not seen that, I'm hard pushed to figure out how he allowed four runs there, because I joined hm as he was getting started on a run of retiring 15 consecutive Giants batters. He didn't allow another one on base until he walked Posey with two outs in the sixth. The seventh inning was sticky, as he put the tying run on third with one out, but came back with a huge strikeout of defensive replacement Juan Perez, and got a routine pop-up to Aaron Hisanm,.as,mnz, z,kmasj. That's no typo. It's pretty much what every D-backs fan thought, as this happened:

And exhale... So, Miley exited with a pretty credible line, considering how it started. Seven innings, four runs on six hits and a walk, with five strikeouts, and in line for the victory. Interesting choice by Kirk Gibson to go with Will Harris for the eighth inning, as he typically worked less important situations last year [61.3% of his PAs were in low-leverage situations, and he only came into three appearances all year to protect a one-run lead]. He got some defensive help on a nice snare at the hot corner by Martin Prado for the first out and after a walk to the obese raccoon, got Posey and Gregor Blanco to stare at strike three.

On to the ninth, and enter Addison Reed for his first save opportunity. as a Diamondback, after being tagged with the loss yesterday. Would there be redemption, given the slimmest of margins to defend? He got Belt swinging for the first out, and then got pinch-hitter Hector Sanchez to sky one high down the third-base line. Prado, Owings and Trumbo all converged, Owings calling for it, but he over-ran the ball stumbled while trying to come back, and the ball dropped in for a one-out double. Ulp. However, Brandon Crawford fouled out and K'd Perez to nail down the first win of 2014 for the Diamondbacks.

Truly, it was the reverse of last night in many ways. It was the Giants' turn to blow a four-run lead, while yesterday's goat Pollock had three hits, scoring twice, and Trumbo looked pretty feeble, going 0-for-4 with a pair of double plays. There were two hit nights for Parra, Goldschmidt and Owings. As noted, Montero walked three times - he had multiple weeks last season, e.g. May 10-31, where he walked three times, so that's really good to see. Definitely good to get that one under the belt, and I was particularly impressive by the way the team fought back after the hammer-blow which was the first. 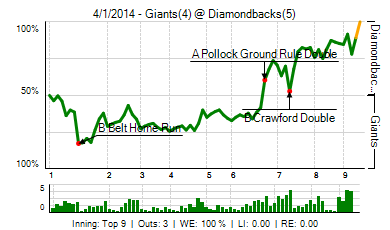 So for anyone who doesn't know...

soco and mrssoco had their baby this afternoon. I’m pretty sure Grace already has her own baseball mitt.

And she brought us a victory too. Guess we need someone else to squeeze out a child tomorrow, to keep the winning streak going. Any volunteers? That game pits Trevor Cahill against Tim Hudson, with the first pitch scheduled for 6:40pm again. Be nice to get our first winning streak of the season going.