Rookie starter Mike Bolsinger looked promising through three innings, but was touched up for six earned runs in the fourth and fifth. Los Angeles scored eight in those two innings to effectively seal the deal behind an efficient start from Dan Haren.

Share All sharing options for: Diamondbacks 6, Dodgers 8: Singin' the Blues

Looking for an answer in the starting rotation besides Wade Miley, the Diamondbacks turned to Mike Bolsinger to get a winning streak going. Although his first time through the Dodgers' order was great, Bolsinger couldn't hold them off the next go around and he was gone in the fifth, forcing Arizona's hand yet again.

Just looking at his stuff, Bolsinger can be the fifth guy in the rotation heading forward. He has good command of his cutter, and his curveball seems to fool hitters at points. The fastball won’t blow anyone away but if it’s well placed, it can be successful. He got hurt when he left it over the middle and that can be said for any pitcher with a below average fastball.

Aside from one shaky inning in the third, Dan Haren was terrific, allowing just two earned runs on seven hits in 7 1/3 innings pitched.

Perhaps aided by the sun and shadows in Chavez Ravine, Haren and Bolsinger traded zeroes through two.

Mark Trumbo got things started in the top of the third with a base hit up the middle. Chris Owings then moved him over with a bunt, although it did look like he was trying to bunt for a base hit. Bolsinger blooped a single over short to advance Trumbo to third. Let’s be honest, if the pitcher is getting a hit, it has to be a good omen. In the ensuing at bat, Parra hit a slow grounder to second and Hanley Ramirez dropped the throw from Dee Gordon and everybody was safe, allowing Trumbo to score.

Aaron Hill stepped up and was promptly hit by an inside fastball to load the bases for Paul Goldschmidt who singled in Bolsinger and Parra to make it a three run game. Miggy didn’t think it was time to stop the fun so he laced a double down the line in right to score Goldy from first to extend the lead to four. That was a fun inning.

Bolsinger struck out the side in bottom of the third, albeit allowing a walk to Dan Haren and a base knock to Gordon with two outs.

Man this Owings kid is great. With two outs, he stepped up and singled to right center, and turned it into a double as Matt Kemp fielded the ball lackadaisically. It went for naught, though, as Bolsinger struck out to end the inning.

With one out, the Dodgers got things rolling in the fourth. Adrian Gonzalez and Matt Kemp had consecutive bloop singles. With the crowd roaring in the background, Bolsinger served up a fastball right down the middle for Andre Ethier who hit a home run to diminish the lead to just one run heading into the fifth.

After loading the bases, Bolsinger did a great job of getting a ground ball but Martin Prado bobbled what would have been an easy double play and everybody was safe with a runner scoring to start the onslaught. Bolsinger was pulled in favor of Oliver Perez and Gonzalez singled to right scoring two to give LA their first lead of the night. Kemp then doubled to left to score another two and at this point everybody was feeling like this:

Dan Haren stayed in his groove and cruised through the sixth and seventh inning. He was pulled in the eighth with one out already recorded in favor of the absolutely brutal haired Brian Wilson. With two on, Prado doubled in two to cut the lead in half, but the D-backs couldn't push another one across.

You’ve got to tip your hat to Trevor Cahill and his work in relief tonight. He retired nine in a row in three solid innings to keep the D-backs in the game, which is really all you can ask for in a situation like that.

The D-backs couldn't strike up a rally in the ninth against Kenley Jansen and fell to their 15th loss of the season. 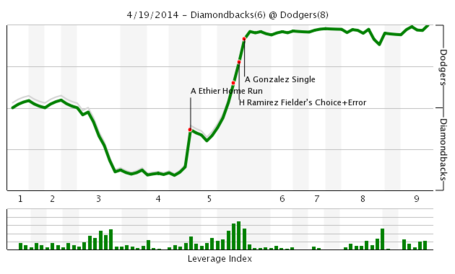 Josh Beckett and Josh Collmenter take the mound tomorrow in the rubber match of the series.