You're given the keys to a new MLB Franchise. Where would you put it?

So you've inherited a boat load of money from your harder working relative who built an international corporation from the ground-up, while you just spent the past decade trying to beat all the Crash Bandicoot games. You decide to invest in a new Major League Baseball franchise, as in this world the opportunity for more expansion has arisen. Since your brilliant idea of having a Hooters franchise in space was determined "Not feasible" by those boring accountant types, you do this instead.

("Hey Clefo!" You say. "I've noticed you've never really written anything directly ABOUT the Diamondbacks this season. What's up with that?" And I respond "Uh, can you blame me?" and you say "Good point, carry on.")

Now, where would you put this franchise? What would its nickname be? What kind of stadium would they play in? All of these things come into focus.

For the sake of getting a column in on time, I've decided to do this thought experiment. Now what I would actually do is revive the Montreal Expos, get them some new digs, and have a promotion where fans can throw hatchets at Jeffery Loria and Bud Selig, but for the purposes of this, I've decided to start from scratch.

A city that already has a team in one of the other Big 3 leagues was my first criteria (Sorry, Yonkers). I also decided to gravitate towards the western half of North America, because screw you east coast.

I basically came down to two cities: Portland, OR and Vancouver, BC. I decided to give the tiebreaker to Vancouver because Portland did just lose a AAA team in the not-too-distant past, whereas Vancouver lost one in the a-bit-more-distant past. Plus, having a team in Vancouver would probably send Seattle into a fit over territory and stuff, and I've stopped caring if people in Seattle are happy.

The team could play in BC Place (Where the CFL Lions play, I DON'T CARE IF IT MIGHT NOT BE TENABLE FOR BASEBALL, YOU MAKE IT WORK DAMMIT) for a bit, or forever, or until the Canucks lose another Stanley Cup Final and space is cleared out downtown.

If I were to get a new stadium, I'd definitely go the retractable roof route, because that seems practical. It'd probably seat, I dunno, 35,000 or so? Look, I'm not an architect.

I looked at present and past nicknames of Vancouver sports franchises of various types to get a start on things. I didn't venture far from there, because they have a professional Ultimate Frisbee team called the "Nighthawks", which personally stood out as a kinda cool name. (On another note: Is there a more Pacific Northwest thing than having an Ultimate Frisbee team?)

Here is a mockup I did quickly in MS Paint 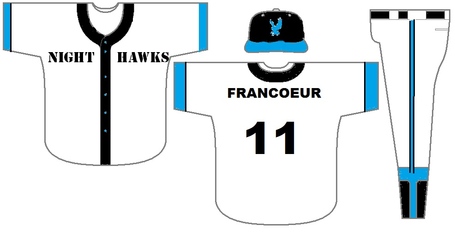 I chose this color scheme because... I dunno, I like it? Black would definitely be the primary with the blue as an accent. I'd have a Black alternate uni, and standard white/gray home/away variations. Simple, but identifiable.

(I should also note now that it just hit me that those were my high school colors, so maybe that's why. I don't spend a lot of time thinking about High School and you shouldn't either.)


Would this team work? Hell, I don't know. This is just a thought experiment. NOW IT'S YOUR TURN! Do the same exercise! Tell us in the comments!

Here's the uniform template if you wanna really get crazy with it: 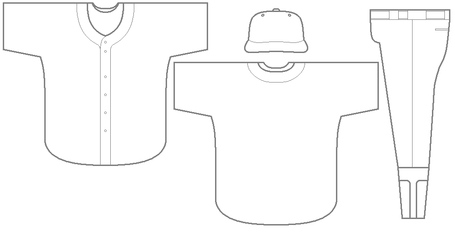