Diamondbacks 5, Dodgers 8: No "Dagger In Their Swagger"

A mix of bad pitching and untimely hitting resulted in another home loss for the Diamondbacks.

Share All sharing options for: Diamondbacks 5, Dodgers 8: No "Dagger In Their Swagger"

I’m just going to go ahead and start this off by saying at least we looked good out there in the Saturday blacks.

When Patrick Corbin went down before the season started, Wade Miley was the next man up to be the "ace" of the club. An ace is somebody you can rely on to go out there every fifth day and give you a quality start. Miley has been the guy who has already stopped two losing streaks so far this year, but couldn’t deliver tonight when they so desperately needed a home win.

Although the game started with a leadoff walk to Yasiel Puig, Wade Miley induced Matt Kemp into a double play and then Hanley Ramirez grounded out to third.

Tony Campana stayed hot right away, slapping a single to left to start off the bottom half of the inning, and advancing to second two pitches later on a passed ball. That’s now the fifth game in a row where Arizona’s leadoff hitter has reached. A sac fly to right moved Campana over to third, but both Paul Goldschmidt and Martin Prado struck out, leaving him 90 feet away from a run. In those last five games that the D-backs leadoff hitters have reached, they’ve only managed to get him across once.

Another leadoff walk by Miley in the second saw Scott Van Slyke, the infamous D-back killer, walk up to the plate with a runner on and he laced a double off the left field wall to slot runners at second and third. When it’s going bad, it just seems to continually go bad for us. The ensuing hitter, Juan Uribe, got jammed but muscled a bloop single down the right field line to score both Gonzalez and Van Slyke. Just like that, the D-backs found themselves in another hole early.

We didn’t respond with any runs in the second. From the outset of the game, you could see that Zack Greinke had good stuff – his changeup and slider were in prime form.

Puig promptly started off the third with a base knock up the middle. Miley then got the next two hitters out. And just when you think an Arizona pitcher might be getting back into a rhythm this year, they just lose it in a blink of the eye. Adrian Gonzalez – who absolutely loves hitting at Chase Field, .332 BA & 1.030 OBP – stepped up to the plate and hit a home run to right, increasing the Dodgers’ lead to four.

The D-backs threatened with two on and two outs in the fourth, but Goldy popped out to end the inning quietly, leaving runners on in scoring position yet again.

Los Angeles pushed across another run in the fifth on a Puig RBI single to score Justin Turner who led the inning off with a double. In the bottom half, the D-backs got on the board on a pinch-hit home run off the bat of A.J. Pollock. Both Campana and Hill got out but Goldy doubled to left to extend the inning. Two batters later, Greinke buckled down and stranded two runners on by striking out Miguel Montero.

Oliver Perez came in relief of Miley in the sixth and immediately walked Drew Butera, who then was moved to second on a Greinke sac bunt. Matt Kemp knocked him in after Martin Prado oléd a ball to his right, 6-1.

Don Mattingly called upon Paco Rodriguez in the sixth after Greinke fanned Trumbo to record the first out – he was already over 100 pitches at that point.

Now, I’m going to be honest with you guys, I turned it from the D-backs game at the end of the seventh to watch the rest of the Suns game. But, of course, since they are a Phoenix team, they are destined to come up short and they lost by three.

So I turned it back to find two runners on and two out with J.J. Putz on the mound and Kemp at the plate. Although he jumped out to an 0-2 count, Putz surrendered a walk to load the bases for Ramirez. And OF COURSE, he walks him to score a run. Saw an interesting tweet: miraculously, Putz had been the only pitcher to not give up a run up to that point this season.

We clawed our way into another run off an RBI single from Cliff Pennington in the eighth and LA responded yet again with another in the top of the ninth off Addison Reed to make it 8-2.

Brandon League came in to pitch in the ninth and loaded the bases up with one out. Montero hit a sac fly to center to score one, and then Trumbo hit a double in the gap, scoring two and making it just a three-run ball game. Mattingly called on Kenley Jansen to close it out and he made quick work of Gerardo Parra. 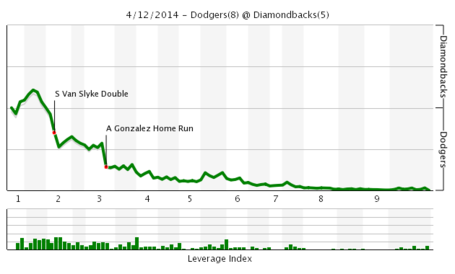 When it comes down to it, you just aren't going to win by giving up eight runs. On to the next one.

Trevor Cahill will have to be the stopper tomorrow against Dan Haren.