Randall Delgado only went 3.1 innings, but Tony Campana and Cliff Pennington combined to go 7 for 11 with three RBI and 2 SB to lead the Diamondbacks to a series victory over the Giants in Arizona's first extra-innings contest of the season.

Share All sharing options for: Diamondbacks 6, Giants 5: First Extras of the Season

After taking it to Tim Lincecum and the Giants on Wednesday evening, the Diamondbacks went into Thursday's game with a chance to capture their first series win of the season. Randall Delgado toed the mound opposite the struggling Ryan Vogelsong. Things started off nicely enough with Tony Campana leading off the game with a single. Two batters and two outs later, Campana made a bid to steal second but was called out on a play that Kirk Gibson elected to challenge. The call was upheld, making Campana the third out of the inning and ensuring the Diamondbacks would be without the ability to challenge the rest of the way.

Randall Delgado responded by sitting down the Giants in order in the bottom half of the first, leaving an odd sense of accomplishment to drape over the Diamondback faithful much like the fog that was starting to descend on the field.

The second inning saw Miguel Montero get hit by a pitch and Mark Trumbo take a walk. Gerardo Parra loaded the bases with a single to bring up Cliff Pennington who was starting in place of Chris Owings for the evening. Pennington delivered a one-out single that scored both Montero and a heads-up Trumbo, giving the Diamondbacks a 2-0 lead. That was the end of the scoring that inning and Delgado went back to work with a lead to provide him with some wiggle room.

In the bottom half of the second, Delgado managed to pitch himself ito some trouble. A double by Pence in front of a walk (the first of three in the game for Delgado) to Hicks brought Brandon Crawford to the plate. Crawford singled home Pence, but the bleeding stopped there.

The Diamondbacks tacked on two more runs in the third, when Goldschmidt doubled, Prado singled, and Montero brought them both home with a double of his own.

The bottom of the inning saw Delgado surrender yet another run on a hard-luck play. After allowing a single to Angel Pagan and a walk to the dangerous Brandon Belt, Delgado induced a ground ball double play out of Pablo Sandoval which put Pagan at third base and brought Buster Posey to the plate. With the speedy Pagan on third, Posey dropped a bunt that Montero pounced on top of, freezing Pagan flat-footed on third. It was at that point that Montero tried to force a throw to get Posey out at first and threw the ball away, allowing Pagan to trot home from third. It was a scary moment as Posey was clotheslined by Goldschmidt reaching across to try and field the ball. Fortunately both players appear to have avoided injury.  A generous amendment to the initial scoring ruled the play an infield hit and an RBI for Posey instead of Montero's fourth error of the season.

The Diamondbacks went down meekly in order in the top of the fourth inning and Vogelsong seemed like he might be settling in a bit.

The bottom half of the fourth brought up the bottom part of the Giants' lineup, but that didn't seem to matter. Michael Morse and Brandon Crawford both hit doubles at Mark Trumbo in left field, bringing the score to 4-3. Brandon Hicks drew a walk before Delgado managed to get Vogelsong to bunt back to him, allowing Delgado to throw out Crawford on a close play at third. With only one out in the fourth inning, Kirk Gibson elected to go to his bullpen, giving Randall Delgado a final line of 3 ER on 6 hits and 3 walks with no strikeout in only 3.1 innings. Oliver Perez came on and promptly induced a double play out of Angel Pagan to end the threat and the inning.

The fifth inning was another quiet one for the Diamondbacks. Goldschmidt led off the inning by striking out. Prado was hit by a pitch and Montero promptly hit into a double play.

Oliver Perez returned to the mound in the fifth inning for the Diamondbacks. While managing to get Brandon Belt to pop up, he then surrendered a walk to Pablo Sandoval. This brought about a pitching change as Kirk Gibson elected to go with Will Harris to try and stifle the threat. Unfortunately Will Harris' struggles this season continued. A single out of Posey and a monster double by Morse pushed two runs across the plate and gave the Giants the lead 5-4.

The sixth inning went by rather painlessly for both teams. Mark Trumbo managed a double that amounted to nothing, and Brad Ziegler tossed a scoreless frame.

The seventh inning provided some excitement. Tony Campana led off the inning with a single. Aaron Hill followed by scalding a double to left that fooled Campana, forcing him to pull up at third. Paul Goldschmidt was intentionally walked to bring up Martin Prado with the bases loaded and nobody out. Facing the Giants' Jean Machi, Prado hit into a 1-2-3 double play which snuffed the threat. He was followed by Montero who struck out swinging, leaving the Diamondbacks scoreless in the frame.

The Diamondbacks elected to run Ziegler out for a second inning and, despite some more base runners allowed, Ziegler put up a second consecutive scoreless inning.

The eighth inning saw Gerardo Parra walk and make it to second on a single by Cliff Pennington. Eric Chavez was unable to bring them in as a pinch hitter, which brought up Tony Campana. Campana hit a grounder down to Sandoval at third. With the speedy Campana running, Sandoval threw the ball away and Parra scored the tying run.

The Ginats had Brandon Crawford lead off in the eighth inning while the Diamondbacks turned to LOOGY Joe Thatcher to get him out. Thatcher made his pitch, getting Crawford to lift an easy can of corn to center field. Unfortunately Campana's defensive struggles continued and he misplayed the ball, putting Crawford on second with a lead-off double.  This was followed by a Brandon Hicks walk and a Juan Perez sacrifice bunt which brought up Angel Pagan with runners on second and third and only one out. The Diamondbacks elected to intentionally walk Pagan to load the bases. This brought up Brandon Belt, who lifted a fly ball to left field that was cleanly fielded by Trumbo. Next up was Pablo Sandoval. The Panda lifted a long fly to right field that thankfully dropped just foul as a charging Gerardo Parra overran the play and missed the ball on a diving attempt to compensate. Sandoval then flew out to Parra just short of the wall to end the inning.

With two outs in the ninth inning, Montero hit a shot to deep center field that Pagan misplayed, putting Montero on second. Trumbo was unable to drive him home, ending the Diamondback half of the inning and sending the game into the bottom of the ninth with the score tied 5-5 and the dangerous Posey, and Pence due up.

Kirk Gibson sent J.J. Putz out to pitch the ninth inning. Putz turned in another sharp scoreless inning striking out both Posey and Pence with a combination of serviceable fastball and devastating splitter. Joaquin Arias then came up to pinch hit and grounded out softly to Putz, sending the game into extra innings.

The tenth inning brought Pennington to the plate with one out. The 2013 extra innings heor laced a single to right field and later stole second base with two outs and Tony Campana at the plate. With Pennington in scoring position, Campana lifted a ball just over the second baseman's head into right field, scoring Pennington and giving the Diamondbacks the lead. This brought up Aaron Hill. Knowing Campana's tendency to run, the Giants called a pitch out and guessed right. It didn't matter. Campana stole second anyway, but Hill was unable to continue the inning.

Addison Reed came on in the bottom of the tenth to attempt his third save of the season. Nine pitches later, Reed tallied a pop-up, a strikeout, and a ground out. 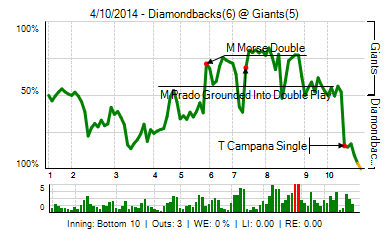 The game was a long one, going almost 4.5 hours, which provided plenty of opportunity for comments. There weren't many recs being tossed about, so I picked a comment somewhat at random that summed up what I think most of us were feeling to represent our COTD:

Out of all the people I expected to be the hero, Campana was at the bottom of that list