Have you seen who the Giants started tonight? He's the guy with "Property of Paul Goldschmidt" tattooed on his forehead.

Share All sharing options for: DBacks 7, Giants 3: Is "Owned" A Strong Enough Word?

Look. We know what you're here for. And so do the DBacks. Paul Goldschmidt versus Tim Lincecum, and there's one thing on everybody's mind.

Once again, they didn't keep us waiting.

Top of the first, the Diamondbacks started strong with Gerardo Parra leading off by launching a ball deep to Triples Alley. Martin Prado followed that up with a walk, and we had runners on the corners with nobody out for the matchup of the day. Last time they faced off, Goldy hit a home run on the first pitch Lincecum threw him. He couldn't match that today, though.

He waited until the third pitch. 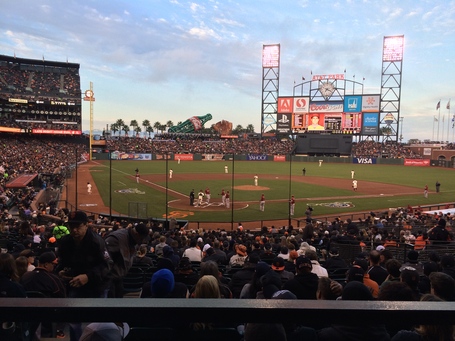 It was a deep drive to right field for Goldy, his second of the season, and his seventh all time off of Lincecum. As Giants fans settled into the inevitability of the moment and Lincecum said something that wasn't fudge on the TV, the Diamondbacks took a 3-0 before a single out in the first. The next three batters went down in order, but hey, it was a lead, right?

The Giants made an effort in the bottom of the first, with Angel Pagan singling and stealing second, but they were kept off the board until the bottom of the second, when Michael Morse led off the inning with a solo home run off of Bronson Arroyo. The Giants tried to threaten again, getting Joaquin Arias to second base with two outs, but Arroyo kept them off the board.

The DBacks came back in the top of the third, though, with singles from Parra and Prado giving us runners at the corners with nobody out as Goldy came up. A familiar scenario, but Goldy couldn't homer again, instead hitting a sac fly to right field to score Parra. Eric Chavez then tripled to score Prado- yeah, I mean that, Chavez tripled- and it was 5-1 in the middle of the third.

Arroyo stumbled in the bottom of the inning. After letting a couple runners on, he had a wild pitch that advanced them to second and third, allowing Pablo Sandoval to score when Hunter Pence grounded out. Though he made up for it a little in the top of the fourth- a two out single by Arroyo brought up Gerardo Parra, who hit his first home run of the season, putting the DBacks lead to 7-2.

The fourth inning proved to be all we'd see of Lincecum- he was pulled for a pinch hitter in the bottom of the inning, and then replaced by Yusmiero Petit in the top of the fifth. Petit proved he could do a better than Lincecum, striking out Goldy to start the inning. In the bottom of the fifth, Buster Posey caught Arroyo for the second Giants home run of the game, another solo shot to take the score to 7-3.

Five innings was what we'd get from Arroyo, too, with Josh Collmenter coming in from the pen. There has been talk that Collmenter is going to see a return to the rotation soon, and the DBacks are going to be stretching him out to prepare for it. Well, mission accomplished today. Collmenter came in and gave four scoreless innings, earning his first career save the long way. Not bad. The Diamondbacks didn't do much more, though- they threatened in eighth and ninth, but couldn't bring the runs across. But they hardly needed it.

It truly makes me happy

That no one in SF is more annoyed by Paul Goldschmidt than Tim Lincecum. You can see the wheels in Lincecum’s head spin.

"He’s just a guy. Sure, he’s had some luck against me but it’s an aberration. A fluke. A small sample size. This time is different. I have a wicked mustache; I am in control of my destiny. It’s time for Tim to write his own story."Goldschmidt homers"OH COME ON."

"You're suffering under an enormous weight. We provide leverage."

So a good outing for the team. Would have liked to see more innings from Arroyo, but Collmenter did a great job out of the pen. Would have liked to see Parra hit for the cycle- he fell a double short- but there are bigger tragedies. All in all, we got our third win, and that's what matters. And, hey, we've got a shot at winning the series tomorrow!