Diamondbacks 8, Giants 9: Another Chase Op'nin', Another Season. Another Bullpen Meltdown

The game started off well, and then it didn't so hard.

Share All sharing options for: Diamondbacks 8, Giants 9: Another Chase Op'nin', Another Season. Another Bullpen Meltdown

Another season that you hope, at last,
Will make your future forget your past,
Another pain where the ulcers grow,
Another op'nin' of another season.

Four weeks, you spring train and spring train,
Three weeks and your pitcher has a sprain,
One week, will it ever be right?
Then out o' the hat, it's that big first night!

The anthem is about to start,
You cross your fingers and hold your heart,
It's first pitch time and away we go!
Another op'nin',
Just another op'nin' of another season.

The Diamondbacks opened the regular season (Yes, Sydney did happen, but we've all agreed it doesn't really count, as it wasn't the start of six months of continuous games.) We come back to chase to see Brandon McCarthy faced off against Madison Bumgarner. Things happened. They were overall not good.


McCarthy retired the first six batters he faces, striking out the side in the 1st and getting three grounders in the 2nd. He gave up a leadoff single to Brandon Crawford to lead off the 3rd. Two batters later, the Garner of Bums had a sac bunt to move Crawford to Second with two outs to bring up Angel Pagan. On the fourth pitch of the at-bat, McCarthy pitched a fastball that caught on the lower-inside half of the plate to end the threa- Hold on, I'm told that didn't happen. 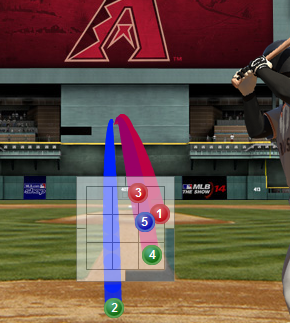 And pitch 5 there? That was the ol' "In play, run(s)", in this case, a seeing eye single past Aaron Hill and Paul Goldschmidt. The throw from Gerardo Parra was just off line enough to not get Crawford at the plate to make it 1-0 Giants.

The Diamondbacks offense got their collective selves on base a few times against Bumgarner. In the 2nd, this lead to a Mark Trumbo TOOTBLAN getting thrown out at Third by Hunter Pence on a Miguel Montero single and a lot of LOB otherwise.

However, all was not lost, as the Diamondbacks broke through in the 4th. Two errors by the Giants infield put Trumbo and Miggy on, and a Chris Owings single loaded the bases for Gerardo Parra (AKA "RBI Machine", circa 2010) Parra got a grounder through the right side. Trumbo scores, and Pence gets the ball into Buster Posey and Montero is called out by Tom Hallion. It was a great play by Posey to get Montero, considering he didn't actually have possesion of the ball. The umpires conferred and the run was awarded to make it 2-1 D'Backs. Two outs later, Aaron Hill came up and gapped one to right to score Owings and Parra to make it 4-1 good people!

The Giants got a run back in the 5th after a Michael Morse, Brandon Crawford double, and a Gregor Blanco (pinch hitting for Bumgarner, ending his night early with the rare 4 IP, 0 ER line) ground out to make it 4-2. However, that was all of the damage incurred that inning.

This actually looked like a well-timed move by Bochy, bringing in Yusmerio Petit, destroyer of snakes. Only it wasn't (TWIST!) Martin Prado got an opposite field double that just stayed fair, and Trumbo scored him with a single to make it 5-2. Montero and Owings also singled to make it bases loaded with nobody out to bring up Parra. Gerardo, for his part hit a grounder to Joaquin Arias at second, who threw to Crawford at short to try to get Owings, except Crawford's foot wasn't on the bag and Owings was safe and Trumbo scored to make it 6-2.

Brandon Belt added a solo shot in the 6th to make it 6-3. General prospect wisdom hails him as the next coming of Jimmie Foxx, and will do so in the event he hits below .250 this season.

The following inning started with a Paul Goldschmidt single. After a Prado strike out, Petit had caught Goldschmidt leaning and running towards second, and had him picked off, except nobody in the Giants infield had the awareness to tag him, so he was credited with a steal. Trumbo then continued his single barrage with another the opposite way, scoring Goldy and making it 7-3.

McCarthy pitched 6 and 2/3, He gave up his fourth and final run on a single to pinch hitter Ehire Adrianza. This at-bat was noteworthy because of another not called strike by Hallion on an inside sinker. Didn't get a screencap of that one, but Adrianza was about to walk back to the dugout.

Oliver Perez came in to make his D'Backs debut, and promptly gave up a double to Angel Pagan to make it 7-5. He then gave up a single to Belt to put first and third with two outs for Pablo Sandoval. Sandoval hit a pop-up that clanked off of Chris Owings' glove to make it 7-6. That was it for Perez, and Brad Ziegler came in to try to be a tourniquet.

He wasn't. He gave up a single to Posey to load the bases, and proceeded to walk Hunter Pence to tie the game at 7. He did strike out Morse, but the Giants got four runs, all with two outs.

There was a Cliff Pennington single in the bottom of the 7th, but he was erased on a strike-em-out, throw-em-out double play with the hitless A.J. Pollock in the first part of that.

Josh Collmenter pitched a clean 8th. Aaron Hill lead off the bottom of the inning again Jean Machi with an infield hit that maybe should have been an error since Sandoval overthrew Belt, but hey! However, Goldschmidt struck out, Prado flew out, and Trumbo struck out to end the threat, if it ever was one.

Addison Reed came into the ballgame, and I'm not going to do any setup because f*** that, he gave up a 2 run homer to Buster Posey to make it 9-7 Giants.

Miguel Montero lead off the 9th with a solo shot off of Sergio Romo to make 9-8. Owings got a bunt single, Parra laid down a sacrifice to move Owings to second to bring up Eric Chavez. Chavez struck out. A.J. Pollock popped up to end the game and well that sucked.

COTN goes to The so-called Beautiful after the Trumbo Tootblan:

Join us tomorrow, maybe the Diamondbacks will win. Maybe not. Eugh.