You know what the worst thing about attending a spring training game is? It's coming home, and the wait to discover the location of the fragment of flesh which missed out on the sunblock. Earlobe? Ankle? Forehead. There's always one...

Share All sharing options for: Diamondbacks 2, Padres 2: Didn't win, didn't lose, had a lot of fun

The first baseball game of the year for us, as Mrs. SnakePit and I joined a select group of 12,464 of our closest friends at Salt River Fields, and watched the Diamondbacks and Padres play their way to our second tie of the pre-season. We arrived earlier than expected, but that meant we got to select some prime real-estate near the bottom of the berm in right-field. Of  course, keeping the space around us free for later arrivals was a different matter. Next time, I think we'll bring some fake dog poop we can scatter around us to help in this task. Or, hell, squeeze the SnakePup gently and use the real thing. Spring training is serious business.

The socos were next to arrive, including mrssoco who is two weeks from popping out a socoette, and reported that at Salt River Fields, for the valet parking, you have to pay $5 for the privilege of driving up to the valet - than another $15 for that. Not impressed. They were followed by a flurry of other arrivals, and by the middle of the first inning, we had everyone in place. SnakePit Rollcall? Myself, Mrs. SnakePit, soco, mrssoco, kishi, mrskishi, asteroid, mrasteroid, their friend Alan, edbigghead, edbigghead Jr and Turambar, all slotted in to the available space.

The game started off with an easy fly ball to right center, which our Gold Glove outfielder, Gerardo Parra, ranged over to snare for the first ou... Whoops, my mistake: it clanked off his glove - insert "two hands!" comment here - for a two-base error. Not quite the way we wanted things to start, and the runner came across the plate on a one-out single. However, that was all that starter Bo Schultz would allow in his three innings of work, and from what we could see (mostly Padres going back to the dugout), he looked pretty good. He allowed three hits and no walks, with three strikeouts, and definitely seems to have improved his stock in spring training.

With one out in the bottom half, we got to see our first review, after a hard smash by Paul Goldschmidt was bobbled by the first baseman, and a footrace to the bag ended with Goldie being called out. Gibson went out, discussed the play, and then the review process unfolded  The play stood as called, but it did seem to take longer than I'd have expected for the decision to be made - reviewing the tape just now, looks like it was approaching three minutes, from the point where Gibson finished his discussion, to the point where the umpire confirmed the decision. Given the goal is one minute, fifteen seconds, they've got some improvement to do.

The Diamondbacks took the lead with some two-out magic in the second inning. Tuffy Gosewisch got the rally started with a double, and Schultz then kept things goings with a fly-ball single to right field, though Tuffy had to stop at third. It didn't matter, as A.J. Pollock then clattered one over the heads of the Colorado outfielders' to the wall in right center, scoring both runners. That was the end of the scoring here for quite some time, as we saw 10 consecutive zeroes. David Hernandez, Josh Collmenter and Ryan Rowland-Smith combined for four scoreless innings for us, with the last named working a perfect seventh.

However, Brad Ziegler blew the save in the eighth, giving up hard hit line drives to the first two batters he faced, to allow the Padres to tie things up, though he was then able to wriggle out of the jam created, with the go-ahead run on second and nobody out. Addison Reed looked impressive in the ninth, retiring two of the three hitters he faced by the strikeout (albeit no-one I've heard of!), and Evan Marshall worked a 1-2-3 tenth. We threatened in the bottom of the ninth, putting two men on with one out, in part thanks to a call of catcher interference, but came up empty, and couldn't take advantage of a two out error in the tenth, Chris Owings striking out to end the game.

We only managed a total of six hits and a walk, with Eric Chavez reaching twice, on a hit and that solitary base on balls. Owings was also caught stealing, though it's perhaps notable or significant, that he was the only starter to play the entire game, going 1-for-5 with a pair of strikeouts. The team is at Salt River Fields again tomorrow, with an evening game against the Seattle Mariners. Patrick Corbin will take the mound, in his penultimate start before the team departs for Australia, a week from today.

And don't forget, the SnakePit Round Table gets under way in a couple of hours, at 8pm Arizona time. Which is now 8pm Pacific time, thanks to the clocks changing... 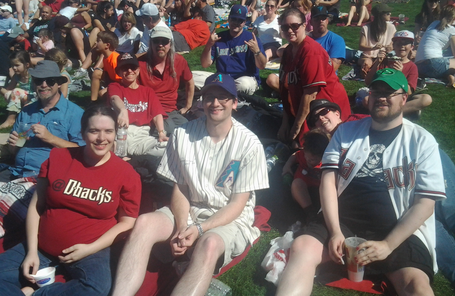