The Only Real Game

You might remember, we mentioned this documentary about baseball in a remote Indian province back in December. It's now playing at the Harkins Camelview, for this week only.

Share All sharing options for: The Only Real Game

For reasons obvious to regular readers - I grew up without baseball, and didn't attend my first game until I was in my thirties - the global nature of the game has always been a topic of fascination to me. Indeed, one of the very first things I ever wrote about the sport, back in 2003, before there was even a proto-SnakePit, was an article on its international appeal. You could argue that baseball in far-flung corners is a "purer" version, untainted by commercial considerations, and played for no contracts, college scholarships or endorsement deals, just the love of the game..

If you are of that mindset, baseball comes little purer than that played in Maripur, a remote province in the north-east corner of India. It's left over from World War II, when American GIs were stationed in the area, due to its strategic importance as a bulwark against the Japanese. They played baseball on their off-hours, and introduced the sport to the locals. The GIs left; the game remained, even as the former kingdom was absorbed into India, and survived despite a nasty struggle between army forces and local insurgents fighting for independence, which has seen the province under martial law for decades. 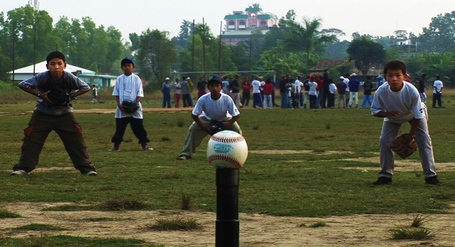 Or maybe that's why it has survived. In a region where violence, poverty, drugs and AIDS are everyday issues - it's just over the border from Burma's Golden Triangle - the need for a simple escape is all the greater. Baseball offers it, even when there are no dedicated parks, so the field is dotted with cows (plus cow by-products!), and equipment is used until it falls apart - then sewn back together, to be used some more. It's in this radically different setting that First Pitch operates, a New York based organization founded by Somi Roy, a Manipuri expat living in New York, and Muriel 'Mike' Peters, to help grow baseball in the province.

One of the things that stands out is the gender blindness here. Women seem to have a more prominent role in Manipur than elsewhere in India, and there doesn't appear to be any barrier to them playing baseball. Among the main participants, Devika (top), played softball for India as a teenager, and now works as a nurse with drug addicts, though still dreams of being a professional baseball coach. There's also Lalit, a young man who wants to play in America, but whose hopes are dashed in the cruelest of fashions, and Geet, whose father was a police chief killed in the local unrest.

On the American side, as well as bringing boxes of equipment. First Pitch also take out two MLB coaches, Jeff Brueggemann (a former AAA pitcher in the Twins organization) and David Palese, who had previously worked elsewhere in Asia. Inevitably, there's a sense of culture shock, but once that's overcome, they get down to the nitty-gritty of the job. Though when asked what the locals want to learn about, the response is a little all-encompassing: "How to pitch. How to bat. Oh, and fielding." I guess some things really aren't so different after all. 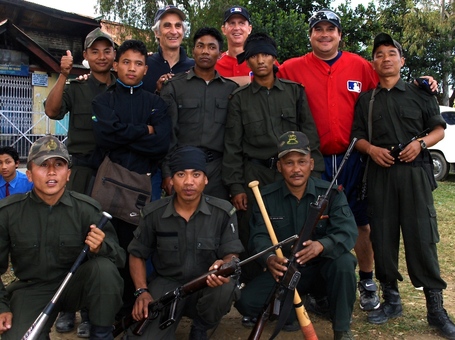 That's perhaps one of the morals here: baseball as a binding force. Even as the film starts with a montage of local farms, markets and other exotic sights, it becomes clear later, that the simple joys of a ball and a glove transcend national or cultural boundaries. I think the scene which illustrated this most was when the coaches convince the omnipresent soldiers, who have watching the coaching sessions, to take part. Initially reluctant, it's not long before their swinging with the best of them, whizzing round the bases like kids - even their commanding officer gets involved and takes his hacks.

Or, to put it as another player, Bame, says near the beginning of the film, "The excitement, the feeling at that very moment, nothing compares. I feel so free and nothing could be as good as that. Truly." In a state where members of the army are perhaps regarded more as an occupying force than as protectors, it's no small achievement for the two sides to be united. Even if only briefly, seeing the sides laughing and posing for photos gives hope that the future for Maripur might be kinder to it than the past has been.

THE ONLY REAL GAME plays at the Harkins Camelview this week, with screenings at 10:20am, 12:30pm, 2:50pm, 5:10pm, 7:30pm and 9:50pm. There are special events this weekend, with director Mirra Bank and coach Jeff Brueggemann in attendance for a Q+A: those are after the 7:30pm show tomorrow and Saturday, and following the 5:10pm show on Sunday.