10 reasons for Diamondbacks hope in 2014

Why the Diamondbacks are going to win the National League West in 2014. Yes, this thread is going to contain only sunshine and lollipops. No negativity will be permitted, even in the comments - HAPPINESS WILL BE RUTHLESSLY ENFORCED! [Pessimists, you get your day tomorrow...]

Share All sharing options for: 10 reasons for Diamondbacks hope in 2014

The 2013 runner-up for the National League's Most Valuable player will be back on the Diamondbacks in 2014. How could will he be? Who can say. He has confounded pessimists like Leith Kaw, by blowing past them, at virtually every step since being drafted by Arizona with the 246th pick of the 2009 draft. After last season, expectations will be higher than ever before. But when has that ever stopped Goldie?

In almost 2,400 career PAs prior to last season, Montero's line was .275/.351/.448 for a .798 OPS. The .230 batting average and .662 OPS put up last season is thus much more likely to be the outlier. We already saw the fruits in the Dodgers series where he had a much better approach, especially against left-handers - contrast 2013, where he went two entire months (July 3-Sep 4) between hits off a southpaw.

We can hardly have more. The 29 BS for Arizona was the most in the NL since the 2008 Cardinals, and was to some extent, simply a result of unfortunate timing for when we allowed runs. Our relievers ERA was 3.52, virtually at league average (3.50), so you'd have expected about an average number of blown saves: 19. And that's discounting the improvement through the end of the Heath Bell Experience.

4. Lots more trotting round the bases

The last time the Diamondbacks had more than one player with 30 home-runs was all the way back in 2005, when it was done by... Any guesses? If you remembered Tony Clark and Troy Glaus, you've a better memory than I. But it seems highly-likely we'll get it again this season, with Mark Trumbo and Goldschmidt the biggest power threat at the heart of the line-up for the Diamondbacks in a decade or so. 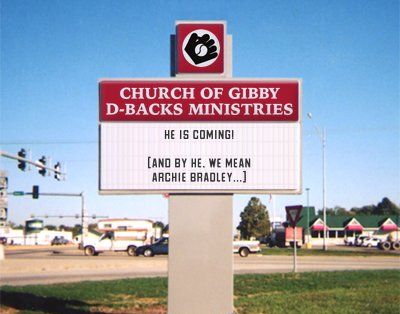 Never mind "better", "some" would be welcome. For since the end of 2004, the Diamondbacks have had exactly one left-handed reliever reach 45 innings of work: Clay Zavada in 2009. Last year, after Matt Reynolds flamed out, it left our main southpaw in the bullpen as Tony Sipp, who worked 37.2 innings with an ERA+ of 81. It won't take much for Joe Thatcher and Oliver Perez to be an improvement on that.

7. Aaron Hill will have two hands

Hill's value in 2012 = 5.0 bWAR. Hill's value in 2013 = 1.2 bWAR. A good chunk of that was down to Hill just not being fit to play, after the Pirates' pitcher plunked poor Aaron, leaving his hand resembling a dropped box of hard candy. He appeared in only 87 games, a drop of seventy from his previous year, and his defense was also not as good according to the metrics. A full season of 2012 Hill will be a big help.

8. The Killer P's in the outfield

I mean, of course, A.J. Pollock and Gerardo Parra, who were two of the top six defensive outfielders in the entire major leagues, as measured by UZR. They're both still only 26 - Pollock will be that way for the whole season - so their most productive years could well be ahead of them. It's not inconceivable we could have three Gold Glovers on the team at the end of 2014.

9. A full season of an effective Brandon McCarthy.

McCarthy would be the first to admit 2013 was poor, but seems to have a whole new mindset. "Last year, from the beginning, coming off everything from the year before, you’re just kind of a broken person and you realize as the year goes on that you’re not what you want to be... I feel like myself again. With that, in games I’m sharper, more focused, and the results kind of follow that. Now it’s just staying in that same place." And healthy...

2011: The 10-14 Ian Kennedy goes 21-4. 2012: Wade Miley squeaks onto the roster, and ends up as our highest placed Rookie of the Year ever. 2013: Patrick Corbin has to fight for the fifth spot in spring, all the way to the All-Star Game. Who'll come out of nowhere to become a mainstay of the 2014 Diamondbacks? Odds are, there'll be someone, and we just don't know who yet.