Diamondbacks 5, Dodgers 7: Too little, too late

Trevor Cahill belly flopped in his 2014 debut, and the D-backs' offense struggled to push runs across against Hyun-Jin Ryu. A four-run ninth inning ultimately wasn't enough to split the opening series with Los Angeles.

Share All sharing options for: Diamondbacks 5, Dodgers 7: Too little, too late

Well, the first seven innings were absolutely brutal. Then the eighth and ninth happened, and they made you feel a little bit better on the inside despite the loss.

Trevor Cahill had a rough go of it on Sunday (I'm writing this on a Saturday night so it feels super weird to type that). Anyway, after forcing Dee Gordon to ground out, Cahill gave up a single to Yasiel Puig. Puig advanced to second on an Adrian Gonzalez walk and Ethier singled him home, giving Los Angeles the lead. On the same play, Ethier tried to take the extra base and advance to second but was thrown out, taking the bat out of A.J. Ellis' hands with Gonzalez on third.

Hyun-Jin Ryu looked solid from the get-go. The Dodger lefty surrendered just two hits in his five innings of work, one coming in the first off the bat of Paul Goldschmidt, who increased his hitting streak to 21 games. Other than America's first baseman, we looked pretty hopeless up there against Ryu -- his well-located fastball and change-up kept the D-backs off balance.

Cahill breezed through the top of the second with the D-back's one and only 1-2-3 inning of the game. But he then ran into trouble in the third. A base hit by Ryu (of course) got the Dodgers rolling and Gordon followed that up with a double to right center, placing runners at second and third. Puig then singled home Ryu and stupidly tried to take second, resulting in an eventful pickle the D-backs snuffed out well, keeping Gordon on third in the process. Yet, after a walk to Ramirez, Gonzalez hit a sacrifice fly that scored Gordon to extend the lead to three and hope was seeping out of my pores.

A quick Diamondbacks half inning brought Cahill back out to the mound far sooner than I would have liked, but he somehow snuck out of a bases loaded jam in the fourth. The Arizona hitters couldn't do anything to help him in the bottom half of the inning so he trotted out for the fifth, but didn't record an out, walking both Gonzalez and Either to end his day. Collmenter came in, walked a guy, rolled up a double play -- which scored one -- then served one up to Juan "Swings Way Too Hard" Uribe who smoked a double off the wall in left, scoring Ethier (5-0 at that point).

The Dodgers tacked on two more in the sixth and seventh, making it a seven run ball game.

Part of the problem in Sydney has been the inability to get a hit with RISP. In the sixth, Aaron Hill walked to start off the inning, and Goldy singled to right. Prado then hit into a double play and thwarted any momentum that was headed toward us. Up until Mark Trumbo's RBI single in the eighth, the D-backs were 0-20 with RISP. Some people would call that pretty bad.

A bright spot in the lull of the first eight innings had to be the performances of Bo Schultz and Addison Reed out of the 'pen. Schultz surrendered a leadoff single to Ramirez but then shut it down. And Reed's stuff, although sporadic at points, was dominant in the ninth. He struck out the side with his sneaky fastball and a slider that was spawned from demons according to Xipoooo.

Little did we know, at the time we were all admiring Reed, the D-backs were staging an eventful last hurrah. Pollock and Hill walked to start it off against Jose Dominguez, and Goldy just missed a three-run home run to center. Prado then avenged his double play earlier in the game with a single to right that scored both Pollock and Hill to cut the lead to four, chasing Dominguez. Mattingly brought in Paul Maholm to face Miggy and he struck out depressingly. Big bad Kenley Jansen was then called upon to face Trumbo and the man delivered our first Trumbomb of the year to cut the lead in half. It was beautiful. And once the excitement reached an all time high, Parra struck out. Game over. But hey, we crossed more than one player over that white home plate thing!

The Diamondbacks are 0-2 to start the season, and they now have eight days to sit on it. 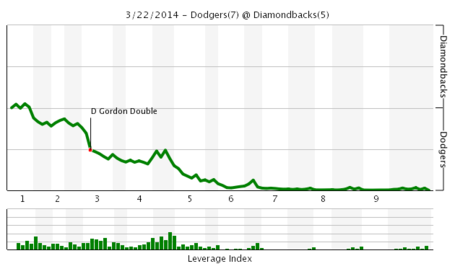 This was fun to write. Thanks for reading the first of many Saturday recaps!