Arizona's streak of victories to start the season ended at six, and though they became the first team to score off Clayton Kershaw on Opening Day., it wasn't enough, as one run was all the offense could manage in Sydney.

Share All sharing options for: Diamondbacks 1, Dodgers 3: Offense down, Arizona goes under

Damn. In the preview to this game, I wrote: "In this kind of match-up, it's usually the team that makes the fewest errors [small E, including things like TOOTBLANs] which prevails, so we'll see if we can play sound fundamental baseball." Didn't quite happen, unfortunately. A couple of free base-runners gifted to the Dodgers by the Diamondbacks proved to be the difference in this one - and if tonight is anything to go by, the Mark Trumbo Experience in left-field is going to be... Well, let's just say "interesting", and leave it at that, shall we?

Wade Miley was as calm  and collected as he could be, fanning Y*s**l P**g for the first out of the 2014 season. Another K followed, and a ground-out by Hanley Ramirez completed a 1-2-3 first for the Dodgers. The Diamondbacks got the first hit of the season, Aaron Hill singling with one out through the infield, and when Paul Goldschmidt followed with another single (extending his hitting streak to 20 games), we were in business. However, Martin Prado could only squib the ball back to Clayton Kershaw, although that did advance the runners. But Trumbo's first official at-bat as a Diamondback was unproductive, grounding out to strand two runners.

Things were about to get worse for Trumbo, however. Remember the concern about his defense? Stay tuned. First, Miley lost control, walking Adrian Gonzalez on four pitches to give the Dodgers their first base-runner. Scott Van Slyke then clubbed a pitch to left field that many people - Steve Berthiaume included - thought was gone, but it was into the teeth of a strong wind that was blowing in from there. As a result, the ball dropped down towards the outfield fence where Trumbo was... Mark... Was... Trumbo... Mark... Oh, hell: there are times when a large GIF is worth a thousand words of twisted description. So, here's Trumbo's first chance in left-field as a Diamondback.

Oh, dear... Now, the wind certainly made the play trickier than it looked, but as first impressions go, this was some way short of what Trumbo wanted. The runners advanced to two bases, and one out later, a ground-ball to second gave Los Angeles the first run of 2014. Unfortunately, they also got the second and third, with one out in the fourth inning. Montero's inability to block a third strike, combined with the capacious foul territory, allowed the slothly Gonzalez to reach first, and Van Slyke didn't make any mistake this time, poking a pitch the other way, down the right-field line for the first hom... [oh, you get the point, I'm sure] a two-run homer and a 3-0 Dodgers lead.

The Diamondbacks were not doing too badly against Kershaw. Through five innings, they had outhit LA, but the free base-runners given to the Dodgers were responsible for two of the three LA runs. Part of the problem was an inability to string hits together. After the first inning shoots of optimism were cruelly stomped, we didn't have more than one base-runner in an inning for the rest of the game, and the bulk of those we did have, seemed to reach with two outs, which severely limited the opportunities to do anything with them. The RISP fail from last night carried forward, as we were 0-for-4 there this evening.

Miley's night was over at the end of the fifth inning, striking out Adrian Gonzalez with the bases loaded, after a Prado throw had drawn Goldschmidt off the bag for an error. His final line was kinda all over the place, allowing only three hits and striking out eight, but still being charged with three earned runs. However, as noted earlier, he wasn't helped out by his defense, or that lucky slap just over the short right-field line - a couple of feet shorter on that one and we'd probably have been looking at five innings of one-run ball. Think everyone would have been more than satisfied with that as an outcome.

The Diamondbacks got on the board in the bottom of the sixth, snapping Kershaw's scoreless streak on Opening Day at 24 innings. Goldschmidt doubled into the gap, advanced on a wild pitch, and came home on a Trimbo groundout to the right-hand side of the infield. Meanwhile, Will Harris was being quietly awesome, with two shutout innings of one-hit ball in relief of Miley, with three strikeouts - including P**g's third of the night. I got a little warming glow there. The one hit he allowed was to Kershaw, who opted to test the arm of Trumbo and try for two bases. Instead, he became the Trumbonator's first victim - I suspect, much like Jason Kubel, his arm won't be the issue...

The last couple of innings were largely uneventful. Brad Ziegler worked a scoreless eighth, followed by Oliver Perez and J.J. Putz combining to do the same in the ninth. We couldn't get a hit off the Dodgers bullpen, our last chance coming when Chris Owings worked a two-out walk in the ninth, but Gerardo Parra grounded out to short, and the Dodgers took the opening game of the 2014 season. I did kinda wonder about our roster construction for the series, which left Gibson to use left-handers Didi Gregorius and Eric Chavez as pinch-hitters against Kershaw, because the only righties available were Tuffy Gosewisch and Cliff Pennington. 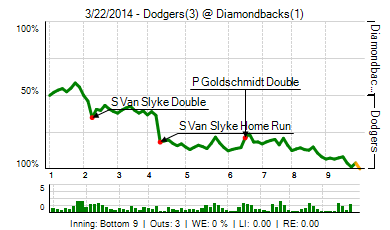 So we yelled, bickered, and hollered at each other all offseason

Time to let all that go and watch some DBacks baseball.

It's a nice sentiment, though I think the yelling and bickering did actually continue into the thread - my hopes we could get through one game of this 162-game season without hyperbolic negativity proved sadly unfounded, unfortunately. We regroup in a few hours for another crack at the Dodgers, and it should be a little easier in terms of the opposition starter, with Hyun-Jin Ryu taking the mound for them, going up against Trevor Cahill. First pitch is scheduled for 7pm Arizona time. I'm now off to get some sleep: you should probably do the same!