Is top prospect Archie Bradley on the way into the starting rotation in the aftermath of Corbin's injury?

Share All sharing options for: Patrick Corbin injury: Diamondbacks scramble to cope after loss of ace

Scottsdale, AZ -- Wade Miley wasn't planning to travel to Australia with the Diamondbacks as recently as last night. "I was zero-percent packed. My wife is in the process of [washing and packing]. She's been a trooper. I heard her moving around at 3:00 this morning, I couldn't sleep. She was putting things together, and is still going at it right now. She's going to be on Australian sleep time before we even get there." With Patrick Corbin's injury, Miley is now going to start the first game of the two-game series in Sydney next Sunday.

It's fair to say, on the day they're supposed to head Down Under, the Diamondbacks weren't prepared to face the possibility of losing Patrick Corbin to Tommy John surgery for the year any more than Miley was ready to travel. Corbin admitted feeling some tightness all spring, but he attributed it to fatigue and hadn't told the coaching staff about his discomfort until calling manager Kirk Gibson out to the mound in the seventh inning yesterday. With a damaged ulnar collateral ligament confirmed, Corbin will now have to choose between attempting to rest and rehab the injury or proceeding directly to surgery.

It's a potentially devastating loss for the Diamondbacks, who are hoping to keep pace with the Dodgers in the NL West. Just 24, Corbin was one of the best starters in the National League last year. Not dominant in any one area, Corbin is exceptionally competent across the board, the sum of his low walk rate, slightly above-average strikeout rate, and ability to keep the ball on the ground adding up to one of the 30 best pitchers in the majors. He also was extremely sharp this spring, with 17 strikeouts against just three walks in 19 innings.

The D-Backs didn't have to be so shorthanded, but in a curious offseason move, they sent away top prospect Tyler Skaggs to acquire uni-dimensional slugger Mark Trumbo. Skaggs has had trouble in the majors to this point (a 5.43 ERA in 68 innings), but performed adequately in a hitter's paradise in Reno last year and is seemingly ready to step into the Angels' starting rotation this year now that Joe Blanton has fallen so far out of favor.

The Diamondbacks still have Archie Bradley, of course, one of the consensus top-10 prospects in the game today, and could presumably slide him into the starting rotation. Bradley is only 21, and as you would expect, he feels ready, though nobody has spoken to him about the possibility yet or the extent of Corbin's injuries. Even though he dominated at Double-A Mobile last year, posting a 1.97 ERA in 21 starts (with 119 strikeouts in 123.1 innings), he also walked a troubling 59 batters. He still has, according to Minor League Ball's John Sickels, "some command issues to work through." This spring, he has stymied the Rockies and Angels, but got cuffed around by the Mariners; and, again troublingly, he's walked six batters in just over eight innings. 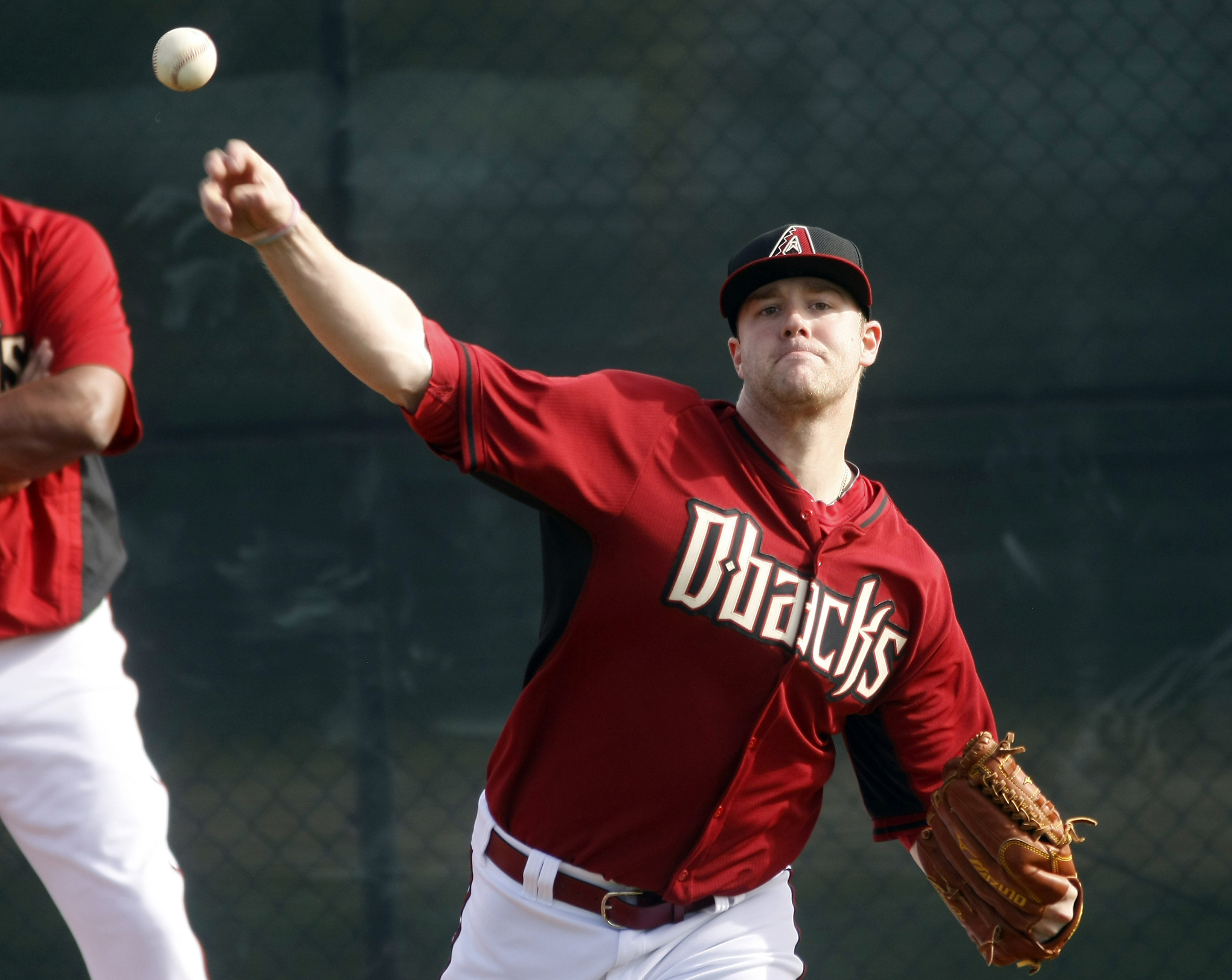 Is Bradley ready? "We're trying to figure that out," Kirk Gibson told reporters on Sunday. "He's going to pitch the exhibition game in Sydney. We like what he's done so far through the minor leagues and spring training. He struggled a little in his last start, but he had a great bullpen the other day. It'll be interesting to see how he throws the ball down there and he certainly is one of the guys in the mixture to step into the starting rotation. It's not a guarantee, but it's a possibility. He's gotta throw strikes."

If Bradley doesn't get the nod, that will likely mean that Randall Delgado is tapped as the number-five starter, something which didn't seem remotely possible back when the Diamondbacks signed Bronson Arroyo in February. Delgado, acquired from the Braves with Martin Prado in the Justin Upton deal last year, has really struggled in Arizona, and hasn't done much to relieve any worries about him this spring, posting a 5.56 ERA with three homers allowed in 11 innings. It's not a happy fallback position, and one with limited upside given the 37 home runs Delgado has allowed in 244 major league innings to date. A further threat to the rotation is the potential that Arroyo could be sidelined by a bulging disc in his back. Arroyo threw a bullpen on Sunday and reported "feeling great." It was the one bit of good news the D-Backs received this weekend.

The one luxury the Diamondbacks do have right now, in contrast to Miley and his wife, is time. Despite starting the regular season in less than a week, the team won't need a fifth starter for another two and a half weeks, hopefully giving them enough time to decide whether Bradley is ready to contribute or if he needs a little time at Reno to work through his command issues before debuting later in 2014.

[This article first appeared on SBNation.com]