If you're going to Fan Fest tomorrow, the following might well be of interest - a map of the event, details of who'll be signing when, etc. 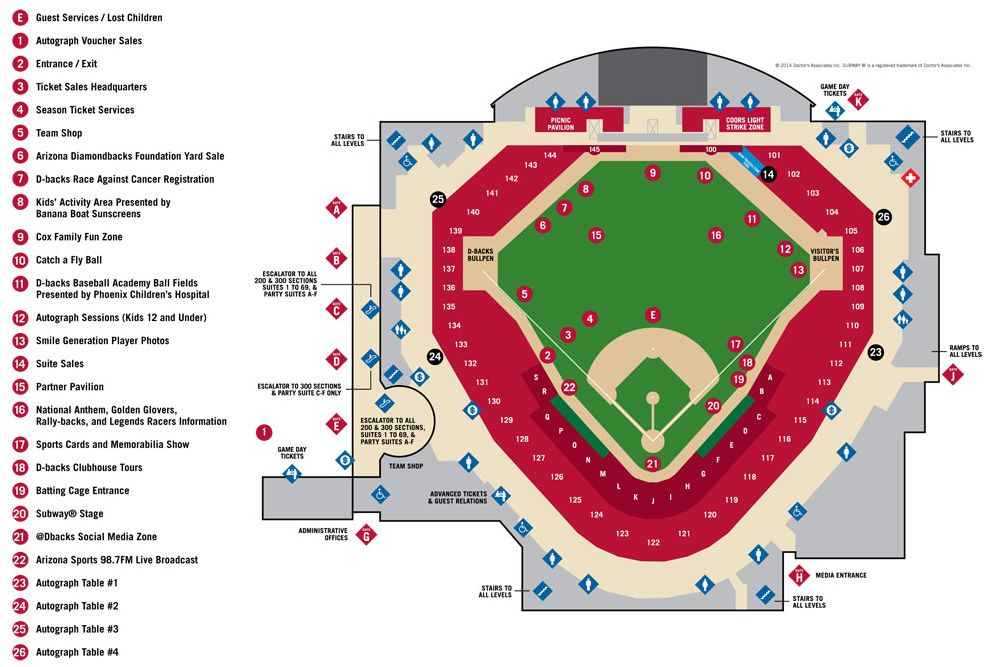 After the "phony war"of yesterday's P&C reporting [where half of them didn't show up], there will be a lot more activity tomorrow, with the tenth annual Diamondbacks Fan Fest at Chase Field. Unfortunately, I won't be able to attend - they've shifted the start time back to 11am, which makes it rather pointless for those who have to be at work by noon. This may be in part because there's no 5K Fun Run associated this year: Derrick Hall mentioned in his on-line Tweetchat yesterday, that it has been shifted to later in the season.

Based on previous experience, there will be a significant queue to get in, unless you're a season ticket holder, who do get early admission. In previous years, there has been other chances to get in before the masses e.g. taking part in the Fun Run, or through buying Subway sandwiches, but there does not appear to be anything similar, so be prepared to queue. Unless you're one of those heartless guttersnipes who queue jumps, in which case I hope you are torn limb from limb by a pack of rabid coyotes [yeah, I'm British: we queue]. Parking may also be fun: there were 25,000 reported at last year's event, about the same as a regular game, so don't expect to be able to pull up next to the ballpark.

Once you've queued to get in...be prepared to queue more. Just like Disneyland, if something's interesting, it'll be popular. If it's popular, there'll be a line for it. Outside of the autographs, the clubhouse tours and the Diamondbacks Yard Sale are probably the longest - the latter, particularly early on, as everyone wants to get there quickly and snaffle up the good stuff. If you're looking for 8x10s of Russ Ortiz for a nickel, there's probably not so much point in trying to beat the rush. But be patient, and just enjoy the experience of being out on the field, something which will result in a trip to the cells if you try it during a game!

Speaking of which, you'll also learn it's further than it looks from the concourse to the field. Most of the activities are on the field. The restrooms are on the concourse. Figure that tip out yourself, and plan accordingly. The same goes for the concession stands: while some will be open, it's probably not going to be as many as for a normal game, even though the number of attendees will be similar (albeit over a longer period). Visit them when you arrive, on your way down to the field: trust me, your calf muscles will thank you for this advance planning later. But you can also take the opportunity to sit in the really expensive seats by home-plate and eat your hot-dogs there. :)

There was a brief presale window for vouchers to the autograph sessions, but those didn't last long, and are now apparently sold out. All hope is not entirely lost though, since there will be limited numbers of vouchers available on site tomorrow, but I expect those will be gone quite quickly, so I'd recommend getting there early. There are also special kids' autograph sessions throughout the day and player photo opportunities, for which there is not fee. These are the currently scheduled paid autograph sessions: a schedule for the kids' and photo sessions can be found here. All subject to change, naturally.