Differences between football (no, the REAL one) and baseball

I've been watching a lot of football of late. Naturally, I do not mean the mutant rugby which climaxes this weekend in New Jersey, but the one played mostly with your foot and an actual ball, not your hands and a prolate spheroid.

Share All sharing options for: Differences between football (no, the REAL one) and baseball

This has mostly been because it's good viewing while I pound away on the treadmill, endeavoring to keep up that New Year's Resolution about exercising more. It helps keep me distracted, and it doesn't matter that I can't hear the commentary over my wheezing. But after 13 years in the US, and an increasing devotion to baseball, there are aspects of the beautiful game and the culture that surrounds it, which now seem strange and exotic. Some make it better; some arguably worse [Note: what follows is largely based on the European football model. I appreciate that the US version is its own animal in many ways.]

One of the time-honored traditions of baseball is the manager disagreeing with an official's decision, and ambling out on to the dugout to discuss matters, more or less forcibly - they represent the majority of ejections (97 of the 180 to be tossed in 2013, were managers or coaches). You never see this in football. There's not, as far as I'm aware, any particular rule against it, but it's just not done. It's the players themselves who do the arguing instead.

This is a concept almost entirely foreign to American sport, but is near-universal in Europe. If a team finishes at the bottom of its league, the next season, it plays at a lower level, with the top team from that league moving up to replace the relegated outfit. This certainly helps generate excitement late in the season, as teams battle to avoid the dreaded drop. However, the structure of pro sports here makes it unfeasible. Astros fans may exhale now.

In baseball, if you get tossed, someone else takes over. Now, this will be someone who has been sitting on the bench, so is likely to be a lesser player - but you do at least get to replace them. In football, if you're ejected, your team plays the rest of the game a man short. Despite this severely increased punishment, dismissals are more common in football: about one every 7.3 games in the English Premier League last year, compared to one ever 13.5 games for baseball.

In baseball, you may get fans of the visiting team, as you'll know if you've ever been at Chase for a Cubs game. But these tend more often to be transplanted ones who now live locally. There certainly isn't the mass movement seen for football games, with entire trains being chartered for this purpose. This is probably down to geography as much as anything. The nearest other team to us are the Padres, 300 miles away; if you're in London, there are parts of Germany which are closer.

We've seen times where baseball games have continued, in torrential downpours that made it seem like the sky had opened. Or "summer," as we Brits call it. Which is why bad weather is rarely an excuse, and I don't think I've ever heard the phrase "rain delay" uttered in connection with a football game. Check out this gallery of snow-related contests, thank the gods you (probably) live in Arizona, and go for a nice walk to start February, in your shorts and T-shirt.

6. Mascots treated with the contempt they deserve

With the Cubs having succumbed and got themselves mascoted up [albeit one with "lifeless eyes, black eyes, like a doll's eyes"], the holdouts are few. Now, there are football teams with mascots, certainly, but despite an SB Nation colleague having interviewed the Arsenal mascot, they are roundly ignored by everyone. If proof is needed, one need only look at Manchester City mascots, Moonchester and Moonbeam, below. Someone was clearly having a laugh. 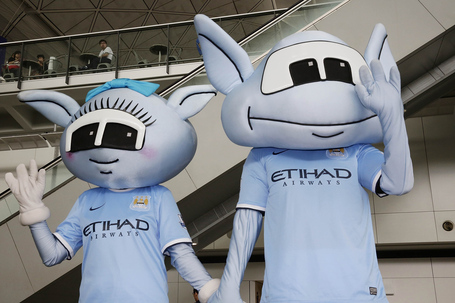 A big plus for viewing while exercising goes. 45 minutes straight, without an advert break. Including half-time, a contest is done and dusted in well under two hours. Or, about as long as the last two innings of a Red Sox-Yankees game. The clock doesn't stop when the ball goes out of play or someone runs out of bounds. There are no time outs. Injury and substitutions, that's it, and even the latter doesn't consist of the manager walking to the middle of the pitch, waving an arm, and a replacement walking on from the other side of the pitch, to warm up some more before play resumes.

Noise in American sports is a lot less coherent - more general "Wooo!"-ing - with the closest equivalent being the fight song, though that's almost exclusively college only. Half the fun of watching British football is listening to the crowd singing and chanting in the background, and trying to decipher what's being said. They can be utterly brutal at times [NSFW, language], but 95,000 fans singing You'll Never Walk Alone isn't something which can easily be matched.

Indeed, the whole prospect structure is entirely different, with no draft either. Instead of a farm system, each team at every level operates independently, responsible for developing its own players. Bigger teams will acquire the best players as needed from smaller teams, and these trades are almost always for straight cash, not other players. [The record fee paid is about $132 million!] This is often a valuable source of funding for those lower down the ladder.

Or the tie, if you prefer. What is it about Americans that they can't stand inconclusive endings? As in sport, so in life. I mean, look at conflicts. Without the Americans, you get the Hundred Years' War, which drifted to a close because everyone who could remember why it started, had died of old age [citation needed]. With them? It always ends with Japan getting nuked. This has been Sweeping Generalizations, and I've been your host, Jim McLennan.

11, Domestic subservience to the national team

There's a reason Team USA has never won the World Baseball Classic. It's because participation is entirely optional and, frankly, appears to be seen by most as a chore. The result? A roster that included Willie Bloomquist. In football, the domestic schedule is often arranged around any international fixtures, and even if not, the national team gets precedence, with players unable to opt out. Plus, if your star gets hurt playing for his country? Tough.

Following some incidents which could be described, with understatement, as "unfortunate," the sale of alcohol at British football games was stopped in the mid-eighties. It still largely applies, though there is growing pressure for a relaxation of the ban. However, I imagine the current situation will probably continue until everyone who can remember why it started, had died of old age...