In which I use a projection system that may look like a 25 year old computer game to see how the Diamondbacks would do against a generic team on any given day.

Share All sharing options for: Projecting the Diamondbacks: HB2 System

(NOTE: All pictures in this article can be clicked on to show a larger version of the image. Also, the ball is hard to see in some images, because it flashes black and white while in the field because computer game from the 80s)

There are many projection systems out there for MLB. PETCOA, ZIPS, are just a two of the many ones out there, and the two that I could think of at the moment. They'll project a team's performance throughout the year through projecting individual performance of a player. Some of them can do things like change their projection based on what ballpark the player will be hitting/pitching in, or change it so that the run-scoring environment simulates the 1960s.

And as of right now, all of those projection systems are crap, because I have devised a new system that will accurately predict games. You may look at it and go "It looks like you just plugged the Diamondbacks into Hardball II, a 25 year old Computer game from Accolade. You'd be right, but it's still going to wow the projection world. It's not like I've leaned on the format of old computer games for an article before.

First we plug the Diamondbacks into the system. 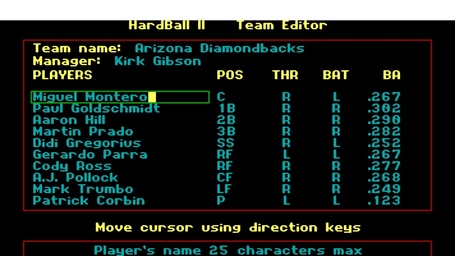 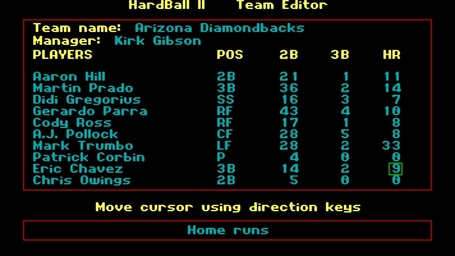 The fun thing about making teams in Hardball II is that you can plug in a bunch of counting stats (Hits, HR, etc.) and it will calculate BA, OBP, SLG and the like. Using that I plugged in the current roster of the 2014 Diamondbacks, using either last year's stats or a career total depending on which I liked better. It's a very scientific system, this.

For the opponent of the D'Backs, I wanted a distinctive team that couldn't be found in the majors. It also had to be filled with stars. 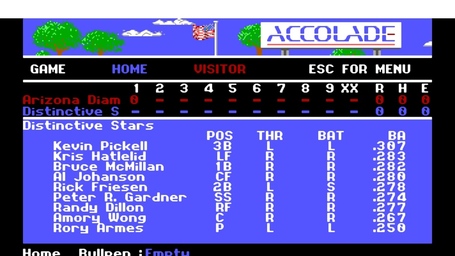 Oh, looks like they're throwing a lefty out there. Plan accordingly! (And assume Cody Ross is still injured for the sake of this simulation.) 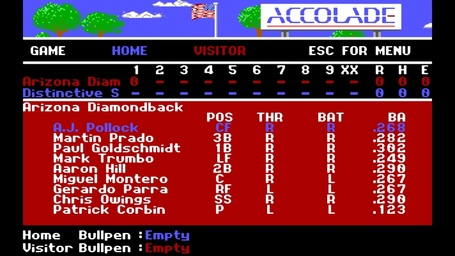 Patrick Corbin gets the start. The Diamondbacks are also the visiting team, because how the team fares on the road will go a long way to determining if they will see the postseason. It has nothing to do with the fact in this game that the home team is always blue and the away red. Nope. 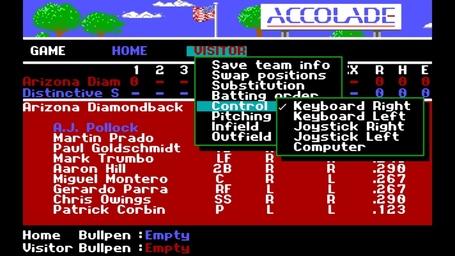 I could have let the computer take control of both teams and write down what happened, but where's the fun in that? 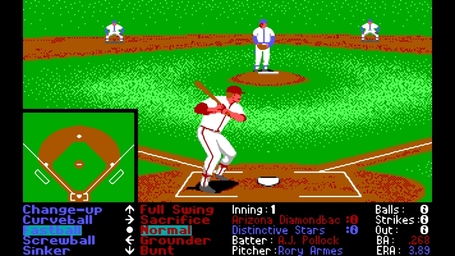 And away we go! I am going to have Pollock do a "Normal" swing. Sure it's a jack-of-all-trades-master-of-none swing, but "Grounder" and "Sacrifice" seem counterproductive, and "Full Swing" is a bit too bold, like it's the sort of swing that will try to hit on your girlfriend at a party and keep at it even when told to stop. 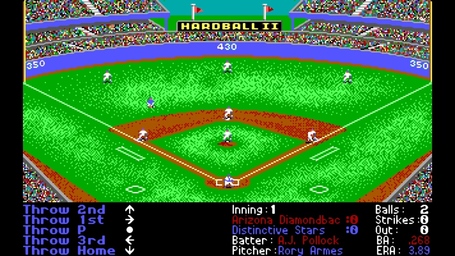 A.J. Pollock gets a single to lead off the game! Paul Goldschmidt also got a single that inning, but the Stars turned the rare 6-5-4 Double Play and the threat was neutralized. 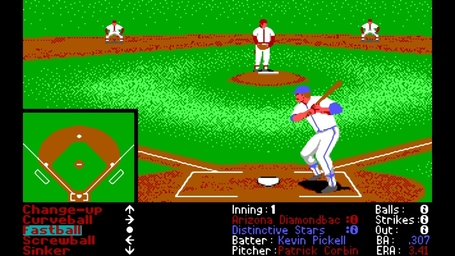 Patrick Corbin takes the mound. As you can see, he has been involved in some sort of offseason plan where he ditched his slider, considered one of the best in the game, for a Curve-Screw-Sink combo. Bold strategy, Cotton. 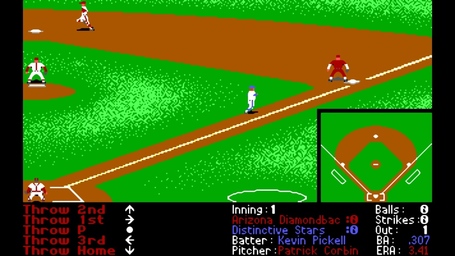 He gets a groundout to start off the game! 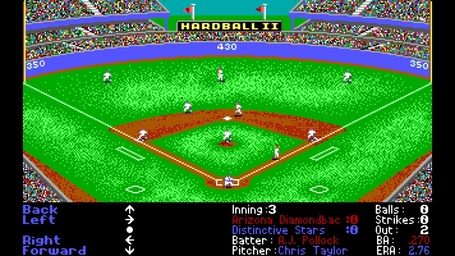 Neither team did much at the plate this game. Nobody struck out, but BABIP was being a cruel mistress to the hitters. The Stars decided to pull an extreme LaRussa and put in a new pitcher in the Third. Pollock did not care, as he doubled between the center and right fielder (shown above). 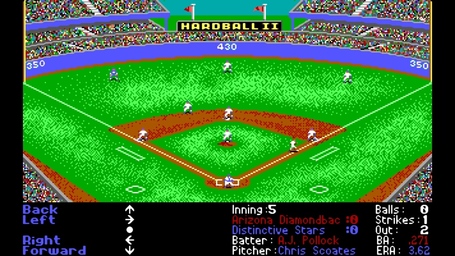 The third time through the order for the D'Backs, the Stars brought in yet ANOTHER pitcher, this time to specifically face Pollock. It worked, as he flied out to Left. Well played, overthinking computer.

The Stars decided that "Chris Scoates" was worth keeping in the game for an extended period of time. However, that proved costly the next inning, when a familiar thing for Diamondback fans occurred. 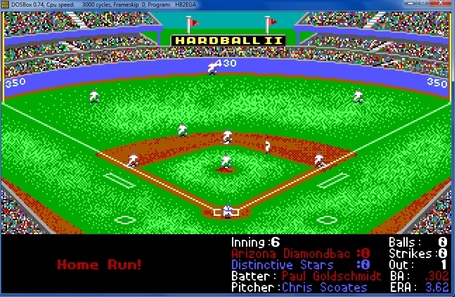 That's right, #GoldschmidtHappened, deep to center. Note that the CF wall is at 430. That's a BOMB! You may have laughed at "Ha ha, old computer game, probably going to be some funny stuff in it." But it knows... IT KNOWS. Goldy also used the aforementioned "Full Swing" on that Homer. He doesn't care if it tries to one-up everybody's stories and tries to chug two beer bongs. He's Paul Goldschmidt, he don't care. 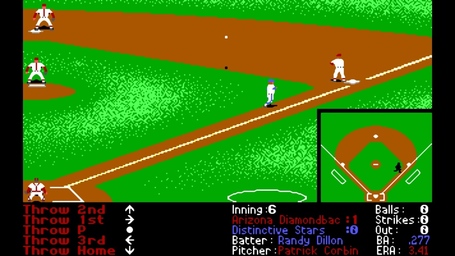 Corbin, meanwhile, continued working. His new pitching arsenal did not lead to any strikeouts, but he was able to induce a decent number of ground balls or easy fly outs. There were a few hits scattered here and there, but they lead to no threat . 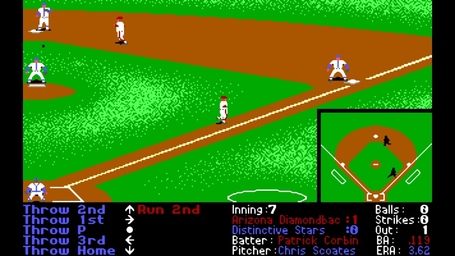 However, his bunting and baserunning could use some improvement. After a Chris Owings single, Corbin bunted right back to the pitcher and got the rare BIDP (Bunt Into Double Play)

Much has been made of Mark Trumbo's defense, or lack thereof, since his acquisition from the Angels. He has not been blessed with great range. It's partially not his fault. He's a natural first baseman, but he has played with other first basemen that are, for lack of better way to put it, way better than him in their careers (Albert Pujols and Paul Goldschmidt.) It's been said that Pollock/Parra will have to pick up a lot of the slack for him, and if this simulation is true, a loooooooooooot of the slack. 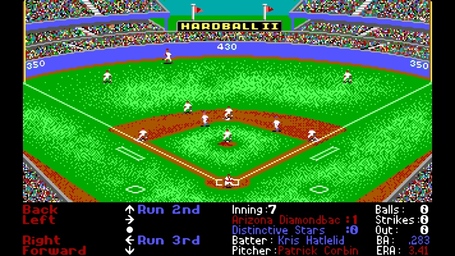 I mean, c'mon man, are you not gonna back him up or anything? Just stand around there and talk to fans about the situation in Syria like some kind of Francouer?

(Also of note: On that play, Pollock overthrew the cut off man and the runner that is going to third in the picture here tried to go home. He was out by 10 feet. I was manipulating this so I didn't have time to get another screenshot, but I wanted to point that out.) 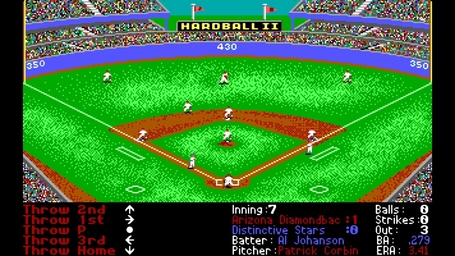 However, a fly out to Center ended the threat and kept the shutout going. 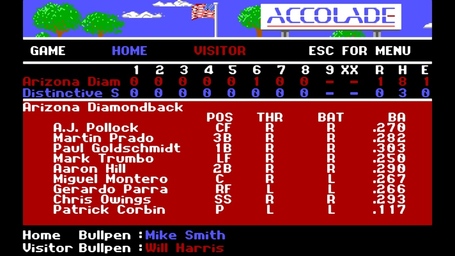 Corbin went out for the Eighth, but I made sure to keep the bullpen ready, just in case. 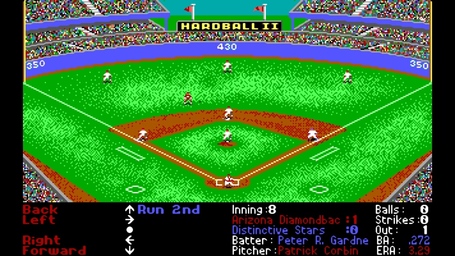 Chris Owings was good at Shortstop this game, but he did catch the same sort of disease that Trumbo did and just watched a ball that was sort of near him for no reason. It does bode well for clubhouse chemistry as Owings and Trumbo can start a wonderful friendship based on looking at stuff. 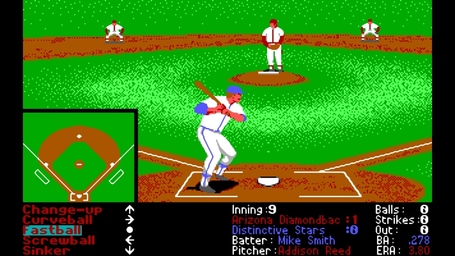 Not wanting to risk fatigue, I pulled Corbin in the Ninth and put in shiny new closer toy Addison Reed. It should be noted that he went to the same offseason pitching camp that Corbin did, as he had the exact same arsenal of pitches. 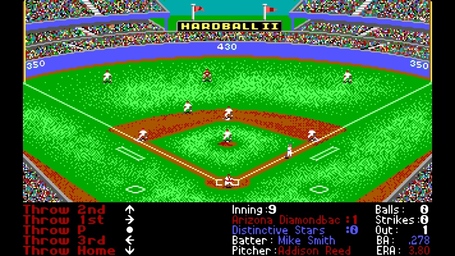 Fly out to CF for out number 1. 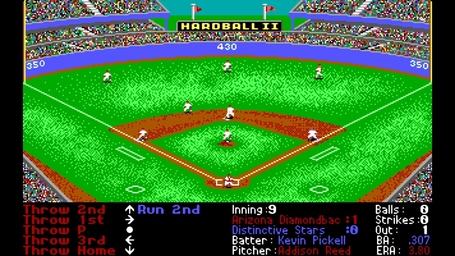 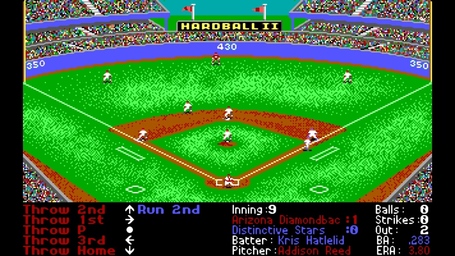 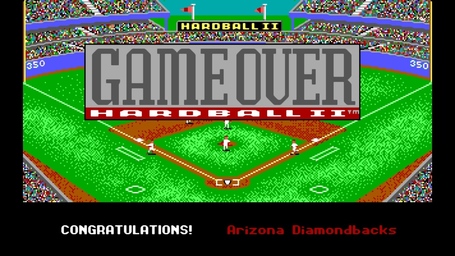 Obviously, it's a one game sample size, but it seems like the offense of the Diamondbacks could be a concern. Sure, Goldy will get his, but that was it run scoring wise. Mark Trumbo had two singles, but he ain't getting paid to get two singles a game (though that would be pretty extraordinary if he repeated that performance every game of this season.)

On the flip side, Patrick Corbin was outstanding, his Screwball was on point. And while Addison Reed had some squiffy moments, he pulled it out in the end.

From this totally accurate simulation, we should expect a lot of one-run games, but so far they seem to be going in Arizona's favor.
Also: You can download Hardball II at any Abandonware website out there, if you wanted to give it a try. You would need Dosbox, an emulator for old MS-DOS games.

Use Ball with Strikeout.

"I can't put those things together"

Use Ball with Home Run.