Thank you, Eric Chavez, for saving the D-backs from the ultimate embarrassment of being perfect gamed by a pitcher, who would have had a good claim to being the worst ever in the history of perfect games.

Share All sharing options for: Diamondbacks 0, Giants 3: Missed it, by that much...

Coming in to the game, I was looking for a few things to be different from the last time Patrick Corbin faced Yusmeiro Petit. In particular, I was looking for Corbin to pitch better, and Petit to pitch worse. I was half right. Corbin became the second Diamondback in less than a week to throw a complete-game in a losing cause, following in the footsteps of Brandon McCarthy last Monday. It wasn't as dominating a start as we've seen from Corbin in the past, as he scattered eight hits and only struck out five, and also got some serious help from his defense, most notably a great catch by Adam Eaton in the fourth, to rob the Obese Raccoon.

However, it was certainly an improvement over the previous couple of games. It was his sixth defeat of the season and, as usual, he got little or no run support. Over those six losses, the Diamondbacks have scored a total of 10 runs for Corbin, only once getting past two runs. All told, it's the ninth time in 28 starts that we've been held to two runs or fewer with him on the mound. It's almost as if the offense only gives a half-hearted effort when Patrick is in action.

But tonight's effort wouldn't even qualify as half-hearted. It's probably not even quarter-hearted: if I had to come up with a precise figure, I'd probably put it around one twenty-eighth hearted, thanks solely to Eric Chavez''s at-bat in the ninth. Up until then, we had a sad procession of poor excuses for efforts, that largely failed either to work the count or make good contact when swinging. The only two passing grades that can be awarded up until that point were Paul Goldschmidt's well-hit ground ball that ended the first, and a line-drive by Corbin that required a diving catch from the Giants left-fielder to end the sixth.

It wasn't even as if there was much danger of Petit having to issue a walk, because we were up there, hacking. He took 27 pitches to get through the order for the first time, in three innings, and was was still only at 65 pitches by the end of the seventh. The Diamondbacks didn't even get to a three-ball count until Miguel Montero's turn at the plate in the eighth, and Chavez was the only other batter to reach that. And then, with the Diamondbacks down to their final out in the ninth, and pinch-hitter Chavez down to his final strike, after laying off a very nasty curveball, this happened.

Hahaha! Suck it long, Giants fans, and suck it hard. Hey, we have to take our victories where we can on a day like this - and today, the victories were extremely few and far between. In fact, consisting entirely of a flared shot out to right field, that someone like....oh, Parra, would probably have snared. Yeah, not exactly a lot to write home about, but I'm pretty sure that the majority of Diamondbacks fans were celebrating that one, like it was Gonzo's game-winning single in the 2001 World Series. Disaster averted.

Petit instead became the 12th pitcher to lose a perfect game with two outs in the ninth, which is even rarer than actually throwing a perfect game, I should point out. He's the second starter to have done so this season, following Yu Darvish of the Rangers, who did it against the Astros in April. I'm not sure if there are any other pitchers in the majors whose first names start with "Yu", but if there are, I'll be following their remaining appearances this season with great interest. 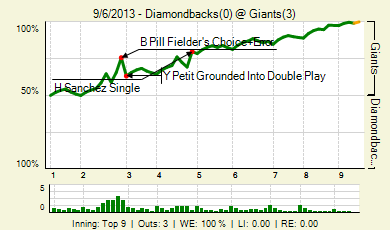 I think that may be closest we've been to having everyone on the Diamondbacks in negative territory: one man crossed the line, doing so by less than one percent. Taking a look at the obvious candidates, the last time we were no-hit, by Anibal Sanchez in 2006, we had some relief pitchers who put up scoreless innings, Sanchez also walked four and the game was closer too, with a 2-0 scoreline. The other time, Randy Johnson was worth +28%, as he dueled Jose Jimenez to a scoreless tie until the ninth.

The mood of the GDT grew increasingly desperate at the evening wore on. Neither the usual talismans of St. Penelope or ponies could break the jinx - in the end, we had to turn to the nuclear option of eel pictures to get it done. soco led all commenters, with Tolkienbard and asteroid tied for second. Also participating in the pity party: AJV19, AzRattler, BulldogsNotZags, CaptainCanuck, Clefo, Dbacks4eva10101, Diamondhacks, GuruB, Jim McLennan, JoeCB1991, PR151, Perfecto, Stile4aly, Zavada's Moustache, azshadowwalker, cheese1213, cole8865, hotclaws, melliemacker, onedotfive, rd33, shoewizard, txzona and xmet. CoTD to Dbacks4eva10101.

On the bright side, we'll finally get talked about on espn

We're back at it tomorrow, with a slightly more-reasonable 6:05 pm first pitch. Brandon McCarthy takes on Matt Cain, and we can at least sleep, safe in the knowledge that the game can hardly go any worse for our hitters. Can it? Can it? Hello, is this thing on?