Tonight, on a very special episode of Series Previews...

As the author of these series previews, I feel a sense of obligation to sell the matchups that don't sell themselves. With that in mind, here are some reasons you should totally check out an otherwise meaningless Diamondbacks/Giants series:

What the Stats Say (Courtesy of Fangraphs):

I don't know if other people knew this, but the Diamondbacks are 5-10 against the Giants so far. They haven't won a series against the last place team in their division since April.

Admittedly, most of those games were back when we thought the Giants would be good this year, so maybe it doesn't feel as bad as it should. But they've been our Padres this year, and it's the sort of thing that messes with you when you look at the standings at the end of the season.

Also, a small part of me is rooting for the Diamondbacks to finish the year with an ERA- of exactly 100. It'll sync up so well with how this season has felt.

The weird part is just how good most of the component pieces of this offense have been. Only Gregor Blanco, who probably has no business being anything more than a fourth outfielder, has an OPS+ below 100.

But they don't hit home runs. Even compared to a Diamondbacks team that may set franchise lows in that department, the Giants don't hit for much power at all. The only team in baseball with a lower SLG% is Miami, and while some of that is AT&T Park, you don't hit just six home runs as a team for almost all of July without something larger being wrong.

Insightful Commentary: Look, we just saw this exact same thing, just in a different city. This is the Hangover 2 of pitching matchups and I'm not thrilled about it. When we last saw it, neither pitcher looked particularly good, but both ended up with decent results. In Cahill's case, he got some well-timed ground balls to get himself out of every jam but the last one.

In Vogelsong's case, he spent the whole game looking like a pitcher with an ERA of around 5.5 in a pitcher's park, hanging pitches all over the place. But the Bad Diamondbacks Offense showed up, and he got out of it with a Quality Start.

Insightful Commentary: I mentioned that Corbin might be tired because it seemed like a logical thing to suggest about a pitcher in his first full season who has been great all year except for his last two starts. The team seemingly had the same thought around the same time, and they will be monitoring Corbin to make sure he isn't showing signs of fatigue. I suspect it's probably a bit more complicated than that, but even if it is, there's no harm in shutting Corbin down and pulling up, say, Skaggs for the final month.

Look Yusmeiro, we get it: you were pissed at your old team. But c'mon, you're in a good place now. So, what do you say you put this anger behind you and go back to being the guy who allowed a home run every five innings or so?

Insightful Commentary: This will be start #3 of the "new" Brandon McCarthy, and while we still can't conclusively say that it's different from the old Brandon McCarthy, it sure does help that he has an ERA of 2.25 in his last two starts without any walks. We're still a couple of starts away from me spending 18 hours on Brooks Baseball trying to figure out what's different, but it could happen.

This will be Cain's first start back since he went on the DL for the first time in his career in August, according to MLB.com. Wait, what? Matt Cain has been around since 2005, and he's apparently never been on the DL before in his career. Eric Chavez has been placed on the DL more since June than Cain has in his career, and he doesn't even play a position where arms explode for no reason.

Insightful Commentary: Wade Miley did this last time out. Not literally, don't research that. Miley figuratively did that against Toronto. All things being equal, I'd rather he didn't do that again.

We're finally getting out of the "look how good Madison Bumgarner is and he's so young too!" phase that has dominated previous Insightful Commentaries. He's the same age as Corbin and Harvey and several other guys who we think of as young but not exceptionally young. If Bumgarner dated someone the same age as Jose Fernandez, his friends would be weirded out. And barring some sort of change in stuff, this is pretty much what we're going to get from him. ERA around 3 in a pitcher's park, just under a strikeout per inning, and pretty good control. He's a great pitcher, but he's probably not going to morph into the world-destroying super-ace I was concerned about in 2010. 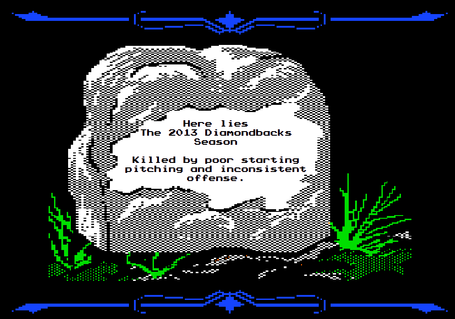 Giants Blog: McCovey Chron--look if you don't know the URL of the Giants' blog by now, you probably weren't going to visit anyway.

(All numbers via Fangraphs or Baseball-Reference unless otherwise indicated.)