it was a happy return to Chase Field for both Dan Haren and Chad Tracy this evening, as they played key roles in the Nationals' victory. The defeat means Arizona need to win in their final game tomorrow, to match last season's win tally of 81.

Ah, so this is what being under .500 feels like. It'd be kinda ironic if we spend 160 games of the season at or above even, only to drop down there for the final two games of the season. But unless the offense wakes up tomorrow, it seems likely that the D-backs will back into their first losing record since 2010, losing five in a row and six of their last seven to end the season there. Make no mistake, it's the hitting which has been responsible: over the last half-a-dozen games, Arizona has scored a total of 11 runs - and there were five extra innings in those contests, so it's really more like 6½ games. We've gone 37-for-209 over that time, a .177 average.

Tonight, there were only five hits, and up until Martin Prado singled in the ninth, all came with two outs and the bases empty, severely limiting the possibility for any real damage. Aside from Prado, Chris Owings had a double and a single, Matt Davidson a double, and Paul Goldschmidt singled in the opening inning, which extended his hitting streak to 18 games. That ties Miguel Montero's run in August and September 2011, also recorded by Justin Upton in April-May 2009. If Goldie gets a hit tomorrow, it will become the best streak posted by a Diamondback since Danny Bautista went 21 games in April 2004. Here are the streaks of 15+ games since.

That was virtually the only thing of interest to report, offensively, although there was a brief flurry of interest against the Nationals' closer in the ninth. After Prado's single, Miguel Montero worked a ten-pitch walk, and both runners advanced on a wild pitch, putting the tying run on second base with one out - and Tony Campana pinch-running for Montero, so anything through the infield would likely have tied the game. However, Davidson struck out swinging at a nasty slider in the dirt, and Owings flew out harmlessly to left-center, sealing the shutout. Remember how we were the last team to be blanked, in the 79th game? Tonight was our seventh.

If there was anything else good to take from proceedings, it was another solid start from Brandon McCarthy, who finished the season looking rather better than he began it. He allowed two runs over seven innings of work, on five hits and a pair of walks, though just the one strikeout. If you're looking for something warm and fuzzy to take away with you for next season, compared and contrast McCarthy's number over his first seven starts of the season, to those put up during the final seven appearances, after he made some mechanical adjustments in late August.
First seven: 40 IP, 61 H, 32 R, 30 ER, 6 BB, 27 K, 6 HR, 6.75 ERA
Last seven: 49 IP, 50 H, 17 R, 16 ER, 3 BB, 21 K, 4 HR, 2.94 ERA

The odd thing is, his K-rate is well down on what it was, which is usually not a good sign. Still if it's the overall numbers of the latter McCarthy which turn up for the D-backs next season, he'll be worth the $10.25 million he's due to be paid. As is, McCarthy's season is an odd one. Going 5-11 with a 4.53 ERA, he is only the second pitcher in franchise history to make 20 starts, lose more than twice as many games as he won, yet have an ERA below 5.00 [the other being Brandon Webb in 2004, who went 7-16 with a 3.59 ERA]. There's likely a combination of factors responsible, but a BABIP of .333 coming in to today, 3rd highest among NL hurlers with 100+ IP, can't have helped.

Tidying up the back end of things were David Hernandez and Brad Ziegler. The latter continued his return to form, retiring all three batters faced, two by strikeout. I know it's a small sample size, and relievers are incredibly volatile (as we've seen), but since coming back from Reno, Hernandez appears to be his old self. In 13 innings of work, he has allowed six hits and four walks, 15 strikeouts and one earned run for a 0.69 ERA. It'll be interesting to see who we anoint as the closer on Opening Day 2011. Ziegler dropped his ERA to 2.25, and for all his struggles, J.J. Putz currently sits at 2.36. It'll make for an interesting off-season discussion. 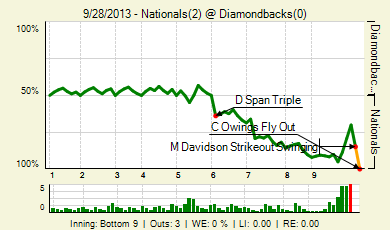 Very lightly-trafficked Gameday Thread tonight. You'd think people had better things to do than watch a meaningless baseball contest or something: you'll be sorry, this time tomorrow, when there are no more Diamondback games to watch! Only 10 people were in the comments, led by imstillhungry95, ahead of asteroid and shoewizard. Also to be found: Diamondhacks, GODSCHMIDT, GuruB, Jim McLennan, azshadowwalker, coldblueAZ and onedotfive. And there was, literally, not a single rec given, so I feel that awarding Comment of the Night is probably not justified.

We're back on Sunday morning for the grand finale, as we seek to avoid the sweep and finish the season at exactly the same record we had at the end of last season. No National League team has finished at exactly .500 over a 162-game season in consecutive years since the 1988-89 Montreal Expos. Maybe we need to change our name to the Arizona Consistentbacks. Wade Miley tries to achieve that goal for us tomorrow, going up against Gio Gonzalez of the Nationals, with first pitch at 1:10pm.