Well, that was fun. The two days by the Pacific Ocean fairly flew past, and we're now back in the hermetically-sealed environment which is Phoenix. Here's a report on our first time outside Arizona since March 2010.

You take I-10 West from Phoenix to AZ-85, then go South on that till you hit I-8, which runs across from Casa Grande, through Yuma, to San Diego. It's about 5-6 hours, depending on factors such as: how many bathroom breaks you have, what the queues are like at the Border Patrol checkpoints (I-8 comes within half a mile of the Mexican border), and whether or not I-8 gets reduced to one lane, because the Fire Brigade is trying to figure out how to extinguish a brush fire halfway up the side of a cliff. I'm not certain what the answer to that particular puzzle was, but it clearly involved lots of them.

We were surprised by the broad variety of terrain: I'd expected it to be fairly flat and generic desert all the way, but there are also some impressively mountainy bits, chunks with roadside boulders which are frankly scary, and some unexpected sand-dunes (below) which, Dan Strittmatter reminded me, were used as one of the locations for Tatooine in the Star Wars movies. The road there seemed to have nastier gradients than the one back, and there were also a couple of moments where the wind shear across the highway, shifted the SnakePitMobile bodily sideways. This certainly is as effective a wake-up call as a double Espresso, we can assure you. 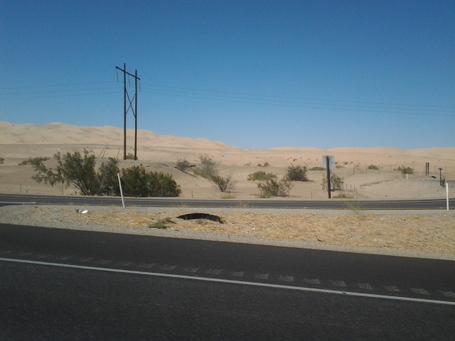 We'd been to the city once before, but that must have been a decade or more ago, when the Padres were still playing at Qualcomm. What we had forgotten - or never noticed - was how hilly the place is, at least in some quarters. Right by the sea, and around the Gaslamp District, it's flat enough, but you don't have to get far inland before you start to encounter streets that are far steeper than anything you'll see in Phoenix - and some of which, I suspect, would give the famed Lombard Street in San Francisco a run for their money. We discovered that Google Maps does not care about such things when providing walking directions.

We were staying with Paula and Keith, whom you might recall as AZDBACKR and Mr. AZDBACKR. They moved out to San Diego from Phoenix a year ago, and now have a home in the Mission Hills district, with a guest house attached. It's available to rent by visitors, but they also let family and friends stay there - we were fortunate enough to fall into the latter category! There are several pics of the place in the gallery, which will give you a better impression of the place than I could, since I don't do real-estate reviews. :) Let's just say it was extremely nice - particularly the courtyard where we'd hang out and have evening drinks and chit-chat.

It is a nice city to walk around: the summer weather is much more amenable than in Phoenix, and the Mission Hills district where we stayed, contains a vast number of different styles of architecture, with almost no two homes being identical, either in layout or horticulture. Made for an interesting meander through the neighborhood, though the real-estate prices still appear to start at "ludicrously expensive" and head up from there, so score one for Phoenix. Parking also seems to be something of a chore, especially around the Gaslamp District where Petco is located. We took a cab in for the night game, simply because it was cheaper than the cost of a garage.

Even though it was a Thursday night outside of the main tourist season, the Gaslamp District was still pretty busy.. I guess the closest equivalent would be something like the French Quarter in New Orleans, with virtually every other building being a bar, restaurant or similar establishment. It does the job, and it was interesting to compare the "before Petco" and "after Petco" pics of the area, which has clearly been largely revitalized, between that and the Convention Center, and compare that to downtown Phoenix, which is still a dead zone after dark, when there isn't a game on. Probably a bit too touristy for my tastes, however. 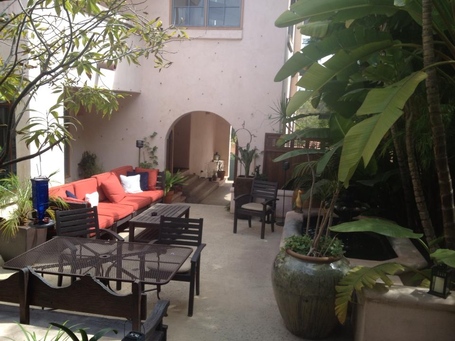 I liked Petco. It's been a long time since I've been to a major-league game anywhere but Chase, and I'd forgotten what an "outside" park feels like. Sure, we can open the roof at Chase, but even then, the concourse is entirely closed in, and has fairly low ceilings. Petco is a lot more expansive, and feels it, with a lot more room above your head, even in the covered areas. There are a lot of girders left exposed [which may tie in to the Western Metal Supply building, around which the ballpark was constructed], which gives it a nicely industrial feel. There's also a lot of evidence of the Padres' close military ties, such as a large-scale model of the USS Midway, now moored nearby.

If there's a signature feature - and I'm deciding this on the basis of, "What would the Dodgers desecrate if they celebrated at Petco?" - it's probably the beach just over the fence in right-center field, complete with sand and bleacher seats. Beyond that, beyond the batter's eye, is a large grassy area, where you can get seats for about $5: admittedly you are very far from the action, but the back of the batter's eye has a large-screen TV, where you can watch the game too. It's a nice, cheap way for families with kids to be able to get into the park: as with the D-backs, fans can bring in their own food, with a few, fairly logical limitations.

One thing I particularly appreciated was the really good selection of beers. with a good number of stands dotted around the parks, devoted to local microbreweries and their products. The pricing for these was very reasonable: $10.50 got you a 24 oz. glass. Ounce for ounce, that works out at only a couple of bucks more than the $4 value beers at Chase, and I'll happily pay that premium, for something which I actually want to drink. There's also a wine bar, which has a rather better selection than Chase (per Paula!). Food items seem fairly standard: we had to try the Sonoran Dog, wrapped in bacon with a jalapeno sauce on it. Unsurprisingly, it was pretty good.

An area where Chase Field clearly wins out, is the massive superiority of D-backs TV. The Padres' scoreboard feels like something out the seventies, it's a tiny, dot-matrix thing, which is surprising, considering Petco only opened in 2004. The information presented is really sparse and basic, compared to what we're used to, and the small section with details of out of town games is equally limited: fortunate that neither team needed to engage in any scoreboard watching over this series. And if you don't like the volume in Chase, you're probably going to be unimpressed with Petco, where the music, etc. seems even louder, to the point it was difficult to converse at times. 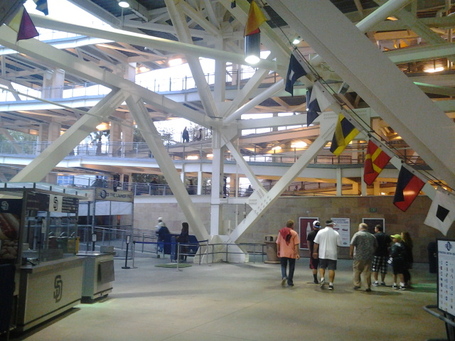 Local fans were friendly, though I imagine the fact they had a blowout win, and a walkoff victory probably helped - no need to kick anyone's ass off the field, when your team is doing it on there. The only moderate issue came after the game, when a couple of people hassled Paula and Mrs. SnakePit somewhat (Keith and I were somewhat ahead, probably discussing something British - like me, he's an expat. I think it was Red Dwarf). And those were actually Dodger fans. Otherwise, very pleasant. The woman sitting in front of us even appeared to be particularly enamored of my and Keith's British accents. Right up until Mrs. SnakePit returned, and assumed her threat posture. :)

Generally, it's a pretty laid-back crowd, not dissimilar to what you get at Chase Field: they largely only get raucous when instructed to do so by the scoreboard. When the Padres hit a home-run, they play a recording of a ship's foghorn (that of the USS Ronald Reagan, fact fans - a nuclear aircraft carrier, ported in San Diego), while fireworks and, impressively, flames, shoot from the batter's eye. Another benefit of the open air. During the blowout, they played a weird bit on the TV, showing Animal Planet-ish footage of a mongoose or similar animal killing a rattlesnake with "funny" commentary. Pretty weak stuff, San Diego.

Before the second game, we spotted Fox Sport Arizona's Jody Jackson walking up the aisle one section across - I'd met hyer when I was doing the FSAZ online chats with Jack Magruder a couple of season ago, and being British, was just going to do the "vague wave" thing. Mrs. SnakePit and AZDBACKR however, adopted the "full-on yell" thing instead: I discovered later, that Paula had gone to umpiring school, and I can only presume she came top of her class in the 'How to yell' module... Let's just say, it did get Jody's attention, so we said "Hi," commiserated over the previous day's blowout, and discussed her lucky shoes. Sadly, they weren't able to deliver a win... 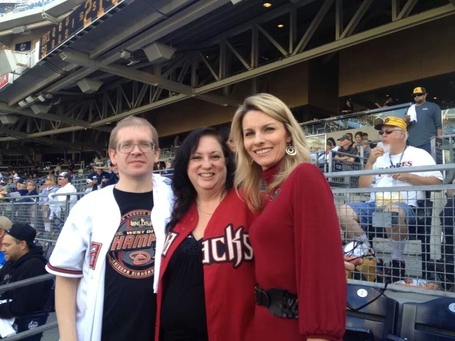 There's a lot to like about San Diego, particularly in the summer when it provides a welcome respite from the hell which is Phoenix. It's easily accessible, to the extent that's it's a credible weekend destination: you could leave after work on Friday, arrive that night and still have close to two full days there before returning. Petco is definitely a good park to visit, and is in a nice location, with plenty of other things to see and do in the area. It's probably safe to say that it won't be another decade before we return.

[Many thanks to Paula and Keith for their fabulous hospitality, and broad selection of beers. :)]