Diamondbacks 4, Nationals 8: Why? Just why?

Share All sharing options for: Diamondbacks 4, Nationals 8: Why? Just why?

The game started out fairly quiet with a strikeout and a groundout. Jayson Werth singled but that was all the noise the Nationals managed to make in the the top of the 1st. The game quiets down until the bottom of the 3rd inning when Gregorious draws a walk and Corbin gets hit by a pitch. Eaton continues the on base parade with a single and Parra drives in Gregorious with a single to right. Paul Goldschmidt hits into a double play but Corbin manages to score. The action ends here as Prado manages a walk and Aaron Hill pops out to first. The fourth inning begins with a walk by Werth and is followed by Bryce Harper who hits a double and drives in worth to make the score 2-1 still in favor of the good guys. Ian Desmond strikes out, but makes it to first because it was dropped. Desmond gets picked off and Ramos strikes out. The Dbacks go down 1-2-3 in the bottom of the 4th. Tyler Moore leads off the 5th with a double to center and Rendon drives him in with another double making the score 2-2. Strasburg strikes out swinging and Jeff Kobernus walks. Werth comes up with 2 on and smacks a homerun to left field making the score 5-2 Dbacks. The game quiets down for a bit until the top of the 8th when Ryan Zimmerman leads off with a strikeout and Werth gets on base yet again with a walk and is replaced with pinch runner Corey Brown. Harper grounds into a force out and Brown is out at second.  Desmond hits a single and Wilson Ramos smacks a homerun to center field to make the score 8-2 in favor of the Nationals. Not much else happens until the bottom of the 9th when Aaron Hill leads off the inning with a single and Montero pops out to third. A.J. Pollock  singles on a line drive to center and Hill advances to 3rd. Didi grounds out and Hill scores. Matt Davidson doubles ad drive in Pollock to keep the come back alive but Eaton grounds out in the next at bat to end the come back and the game. 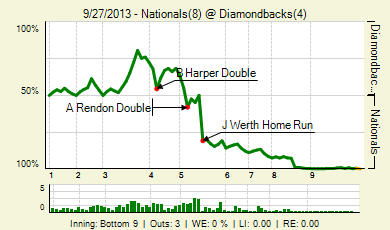 Face of the company: Gerardo Parra 7.1%