Diamondbacks 1, Padres 4: The ennui is overpowering...

Into the final week of D-backs baseball we go. Enjoy these last games, folks, because by next Monday there'll be none left. Though you might have been forgiven for muttering, "Sounds like a good idea," after tonight's contest.

Share All sharing options for: Diamondbacks 1, Padres 4: The ennui is overpowering...

I can't really speak in any great detail about the first four innings, because we were actually watching the series finale of Dexter. That has generated quite the storm of controversy online, but I can't say I was too bothered by it. Hard to see what people wanted to happen. The way things ended, seemed to be a fitting tying up of the loose ends, with the "hero" forced to confront the reality of what he was, despite all his best efforts to pretend otherwise, with the trappings of a normal life. Sure, hardly a particularly dramatic conclusion, but those shrieking "Worst Series Finale Ever! What. A. Joke!" have clearly already forgotten The Sopranos.

Through five and two-third innings, Brandon McCarthy was having a typically Brandon McCarthy-esque outing. He had allowed eight hits, but all of them had been singles. That, and the lack of any walks, meant he had held the Padres to one run. With his pitch-count only in the mid-eighties, he seemed to have a a shot at becoming the first pitcher since Danny Jackson of the 1994 Phillies to throw three consecutive quality starts, allowing 10+ hits in each. It was not to be. With first-base open, a McCarthy pitch was deposited off the facade of the Western Metal Supply building in left, for a three-run homer by Nick Hundley.

I think, if he'd had the chance for a do-over, he would probably have gone after the Padres' slumping number eight hitters instead of Hundley - the broadcast crew were speculating he might do that, before the home-run. However, after getting strike one, McCarthy hung a breaking ball, and that was it. He ended with a line of six innings pitched, eight hits allowed and four runs allowed, with no walks but only two strikeouts. Particularly irritating has to be the broken-bat blooper which provided San Diego with their first hit of the inning, the ball dying out there in the triangle between the infield and right-field. But for that...

However, it wasn't all down to McCarthy, because the D-backs had almost as much trouble with Eric Stults, the fourth time they've seen him this season, as they had the second time, when he pitched a complete-game two hitter. The D-backs looked like they might break through in the second inning, after Matt Davidson, Wil Nieves and Cliff Pennington all singled to load the bases with no-one out. Unfortunately, the pitcher's spot was up, and after McCarthy struck out swinging, all the D-backs could get was an RBI groundout from Adam Eaton, tying the game at one. A.J. Pollock grounded out to the mound, ending the inning.

Our other real chance was in the seventh, when Pennington led off with a double. One out later, Eaton walked, and that was the end of Stults's night. Pinch-hitter Gerardo Parra, brought in to face the right-handed reliever who came on for San Diego, fouled out weakly, and Paul Goldschmidt struck out on what seemed like three very disinterested swings of the bat, none of which made any comment. Eaton (who had extended his hitting streak to ten games earlier in the evening) was our last base-runner of the night, the final eight Diamondbacks being retired in order, and the Padres took the series opener, also clinching the 2013 season series.

There was very little else worth mentioning. A Heath Bell pitch got away and hit Ronnie Cedeno in the head, which appeared to lead to warnings being issued later, when Aaron Hill got buzzed inside. Nothing further ensued. Cliff Pennington picked up three hits, and Eaton reached base safely twice, with a hit and a walk. We got scoreless innings of relief from both Bell and Matt Langwell. Oh, and Eaton almost forgot how many outs there were, after catching a fly-ball for what was actually the second out, and began jogging back to the dugout. That this was probably the evening's most memorable moment, says a great deal about the game. 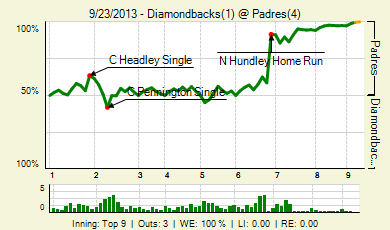 Never the most enthusiastic of Gameday Threads to begin with, there was a positive stampede for the exits after the three-run homer. Hey, at least I didn't make any unwarranted statements about ponies or Matt Davidson's hair tonight, so I'm calling it a huge success. Clefo led the commenters, ahead of imstillhungry95 and soco, with the others present being: AfterSchoolSpecial, FatBoysEatMeat, GODSCHMIDT, GuruB, Jim McLennan, Rockkstarr12, The so-called Beautiful, asteroid, cheese1213, hotclaws, kishi and onedotfive. Comment of the Thread to onedotfive, for an accurate summary of likely SnakePit post-season rooting

Any team but the Dodgers

The universe tends to unfold as it should.

It's back to Petco tomorrow, with Wade Miley taking on Tyson Ross, as the same two sides face off, with the same start time of 7:10pm. Hopefully the result is better, because seriously, I gave genuine contemplation to replacing the recap with a fuller review of the Dexter finale. Still six games left, folks, so something like that might yet happen....