When we started the game, soco joked that there would probably be twenty runs scored because, y'know, Coors. What seems like centuries - but was close to four hours, 38 hits, nine walks and, yes, 22 runs - later, the D-backs took the series.

If today's recap seems like it's suffering from a case of multiple-personality disorder, that's because today's game is a collective recap, presented by the participants at SocoFest 2013.

Kishi here for the first inning, and the top of it was over almost as swiftly as this sentence, with the Diamondbacks going down 1-2-3 on ground outs. Charlie Blackmon singled to start the bottom of the inning, tallying what I would estimate as his 73rd hit of the series. DJ LeMahieu grounded into a fielder's choice, but the DBacks couldn't quite turn it into a double play. But LeMahieu was caught off-guard by Patrick Corbin's pick-off move, making the break for second as Corbin threw to first, and LeMahieu was out as Goldschmidt relayed the ball down to second. Troy Tullowitzki drew a two-out walk, but Michael Cuddyer K'd to end the inning for the Rockies.

Hello! I'm emilylovesthedbacks. Most of you have no idea who I am, and that's okay (because I'm a part of the clique!). The top of the inning went far too long, but we ended up with a crooked number, so that's cool. It started off with an Aaron Hill single (lots of cheers from assembled). We complained a lot about Montero doing...whatever. Oh. Walked after a lot of pitches. We were more interested in the conversation about Nicasio's name being like a knockoff Casio. The umpire didn't like Davidson nearly as much as I did, but no one liked him as much as Jim (as soon as Davidson struck out, there were pleas from Jim to TAKE IT OFF. Yes, he was talking about his helmet, but...) PAAARRRRAAAAA. Scored Hill; we were all admonished by Liz to not wake the napping Henry.

Chris Owings' double scored Montero and Parra, who kind of looked like two cats running into each other's butts. Some guy (Corbin?) grounded out, and then Wonder Woman did the weird thing and scored Owings but turned left like an idiot and got thrown out at first base. Sympathy retirement out for Helton, obvi. The bottom of the inning began with a discussion on swan dives into camera wells and the like. "Honey, what'd you do today? Oh, y'know, baseball stuff". Oh, and dudes struck out, grounded out, whatevs. The most important thing: soco made THE BEST MEATBALLS. 4-0 Dbacks.

DbacksSkins here -- even wearing my RGIII shirt with a Dbacks hat. (#HTTR...even though they lost again. Booo.) A bunch of stuff happened to lead off the top of this inning that nobody was paying attention to -- Jim actually left an ESPN play-by-play tab open, but I refuse to patronize ESPN. (And want this recap to be as authentic as possible) Parra got a single, scoring some dude on 3rd. With runners on 1st and 3rd and Rockies retread Jeff Francis replacing Fake Casio, Owings struck out, as is his right, and Pat Corbin grounded out. With merely a 7 run lead, I'm worried those two runners LOB might bite us on the ass. 7 run lead: What A joke. Klingon, pies, the bands Bad Company and Big Country, Queens NY, Four Loko, and various other things were discussed.

In the bottom, a Rockie grounded out. Another Rockie (later confirmed to be Charlie Blackmon) bounced a ball in front of the plate that Davidson and Corbin almost collided trying to field. Corbin fielded it but the throw was late. Some French Canadian DJ flied out to Parra in right, who almost threw out Blackmon at 1B. Parra is, according to Berthiaume, "a lot of fun to watch". Then, Mrs. Snakepit made a Jamaican joke about Blackmon. Toolo dribbled a ball through the infield that was scored a triple. (Old joke)

At this point, Henry woke up from his nap. jinnah asked Henry what he thinks of Patrick Corbin. He said, "worp". With two outs and Cuddyer at the plate, Cuddyer singled to center, Pollock flubbed the ball in CF, and first Rockie scored, while Toolo went to 3rd in front of a throw. Kishi said "True facts" and soco said "PIN number", and jinnah threatened to take all her pies away. Finally, an Unidentified Batting Rockie (UBR) struck out and was thrown out by Montero. 7-1, Good guys. I believe Henry is Kidkasting the 4th inning...

soco checking in here, taking a break from slaving over the stove.  The Diamondbacks didn't do much in the top of the 5th.  Unfortunately, it was the Rockies scored runs, and chipped away at the lead with X runs.  DUI Helton hit a 2 RBI double, which is annoying  It's too bad he's retiring.  We thought of a good 'going away' gift, though, because I don't think it's fair that Mariano Rivera has been getting all the swag.  Every player could give him a solo cup of Three Buck Chuck, and his car keys.  I'm sure he'd put it to good use.  But luckily Will Harris got the last 2 outs to end the threat, leaving the score at 7-4.  What A joke.

jinnah here! To be honest I was far more interested in looking at the score of the Colts game (beat the 9ers!) so by the time I looked at the game there was someone on 3rd and one out, and then Wonder Woman grounded out to first or something, way to put the Wonder Woman name to shame there, Eaton. Then we were subjected to watching Todd "I-Have-Never-Heard-Anything-About-Him-Until-He-Announced-His-Retirement" Helton take batting practice and I think Pollock got a hit but I was too busy talking about how Helton will get into the HoF over my dead body and Henry was trying to take my phone so my recap is less than reliable. Goldy (which my phone autocorrected to "Godly", aw yeaaah) blooped to center but Matt Williams apparently thought AJ dressed as The Flash today and sent him home, where he was easily thrown out. And since I am also supposed to comment on the Rockies, someone struck out, cool, some other guy named DJ got a hit but I was staring in horror at Chaz Roe's face and didn't really see it, and then something else happened and Tulo got out, hahaha suckas.

mrssoco here! Let me start this with the fact that I am sad about the fact that I won't be able to spend the rest of this commenting on Corbin's adorableness. (He is totally adorbs by the way.) But this was pretty much the simplest inning, which I am thankful for. I only got about half of it. The first part of this inning was 3 up and three down with a blip of on base. Nothing too interesting. My husband is mean and stupid and looking over my shoulder right now. Then was the seventh inning stretch, which they showed up Rivera getting his (Jackie Robinson's) number retired. And then we listened to the Rockies singing a song that we had to collectively rewind to listen to (because people wouldn't shut up!). Then was three Rockies players that no one cared about to go up and go down with no pauses.

mrs. Kishi here for a guest recap of the 8th - Campana pinch hits for Putz and grounds out. Wonder woman manages to get on base followed by Aj Pollock who also gets on base and Wonder Woman makes it all the way to third. Then Goldschmidt hits a fly ball and got both himself and Pollock out to end the top of the inning. so now the rockies are up and David Hernadez is pitching. Arenado got a double(BOO), Torrealba got out, but first dude made it to in the process.  Good Wheeler!, who has now sadly fallen victim of the darkest time line since he is playing for the rockies, came up to bat and as Darkest Wheeler hita  single and allowed Arenado to score. Then we got Blackmon and LeMahieu out to finish up the 8th with a score of Arizona 8 Rockies 5

Jim A three-run lead going into the ninth is usually fairly safe but... Coors. And, lo, the humidor apparently ran out of balls, as the sides combined in the last inning for nine runs. A five-run top of the inning for the Diamondbacks turned out to be valuable insurance runs, highlighted by Matt Davidson hitting his second three-run homer of the weekend, with a Bloomquist triple and an Eaton sac.fly completing the scoring. But the Rockies came back with four in their half, all charged to Josh Collmenter, who retired two of six batters faced. Brad Ziegler took three attempts to get the final out, but did so, stranding the tying run on deck as we squeaked out a win, while scoring 13... 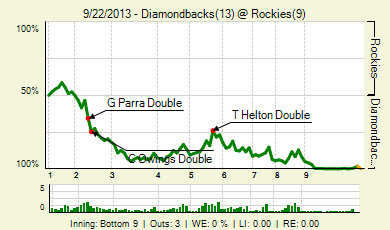 Rockkstarr12 led the commenters, with... What, I came second? I don't quite recall that happening... Hang on: what's this open tab here.... Soco.... You got some 'xplaining to do! Along with 'skins, jinnah, mrssoco, the kishis and just about everyone else who was hovering near this laptop. It all makes sense now.... onedotfive and hotclaws were tied for third, with also present: AzRattler, FatBoysEatMeat, GuruB, Husk, The so-called Beautiful, TolkienBard, azshadowwalker, cole8865, ford.williams.10, jinnah, kishi, mrssoco, preston.salisbury and rd33. I guess this does mean I can choose one of my own comments, since it wasn't me. So what was most rec'd? Let's see...

Ah. Now, if you'll excuse me, I have to go call in some air-strikes... Fang Food and Round table to follow tonight!