Trevor Cahill improved to 5-0 with a 2.64 ERA since the break, and there were good days for youngsters Matt Davidson and Chris Owings, as the D-backs squared the series against the Rockies in Coors.

Share All sharing options for: Diamondbacks 7, Rockies 2: A rolling Cahill gathers no loss

I know it's a fairly meaningless stat, but I can't help being impressed by the fact that Trevor Cahill could go undefeated in the second half of the season. Admittedly, it has been truncated due to his injury, but that's seven starts in a row [not counting his four-inning relief appearance] without a loss for him, and he'll only have one more start, next Thurday in San Diego. I checked back in the records to see if any other D-backs pitchers have been able to make eight or more starts in the second half, without tasting defeat. In short? No. Here are the best second halves I found in team history:

Tonight, it didn't look like it was going to be Cahill's evening, even after he'd been spotted a one-run start, Martin Prado's two-out double driving in Willie Bloomquist to get the Diamondbacks on the board first. The Rockies responded with a lead-off double, followed by an infield single, giving them runners on the corners with no outs, and every indication the lead would be short-lived. However, a swinging strikeout, a line-drive to Bloomquist from future retiree Helton, and another swinging K, and Cahill had escaped. The D-backs doubled their lead in the second: Gerardo Parra doubled to lead things off, and came home on a Tuffy Gosewisch single.

As we saw yesterday, a 2-0 early lead at Coors is certainly no guarantee of victory. Having been made to look like an idiot by my early comments then, I was restraining myself today, but the third inning certainly provided additional cause for optimism, shall we say. Bloomquist led things off with a bunt single, and one out later, Prado also singled. Matt Davidson then dispatched the second home-run of his career, over the 415-foot mark to dead center in Coors Field. Back-to-back doubled by Parra and Chris Owings followed immediately, and with a 6-0 lead, even I began to feel that we might just have a chance.

Of course, there were still a couple of sticky moments to be negotiated over the remaining innings. Helton led of the fourth with an infield single to Goldzilla, and a Gosewisch throwing error - his first in the big leagues (I wonder if he got to keep the ball?) - again put runners on the corners with no outs. Cahill got the first out without damage, but after a stolen-base put two in scoring position, the next fly ball was deep enough to score Helton from third, ending hopes of a shutout. However, that unearned run was the only damage the Rockies managed, until a two-out single in the sixth made the score 6-2, and ended Cahill's night.

Trevor's final line was pretty solid: 5.2 innings of work, with seven hits scattered, but only one walk, compared to five strikeouts, which is a much better ratio than we've seen of him lately. Josh Collmenter came in to clean up, and got Good Wheeler to strike out, with the tying run on deck. Collmenter then worked a scoreless seventh before turning the ball over for an omnibus edition of the Heath Bell Experience, which lasted two innings. The third such deluxe presentation of the 2013 season went well, with only an infield single to interfere with an otherwise smooth and drama-free episode.

Admittedly, our offense had gone somewhat chilly, having already provided tacos by the third inning. We only had one at-bat with a runner in scoring position between the third and ninth innings. However, in that final frame, Adam Eaton led off with a single, stole second, advanced to third on a groundout, and then came home on an infield single by Paull Goldschmidt, giving Paul his 122nd RBI of the season. Parra and Owings each ended the night with three hits apiece, and there were two for Bloomquist and Prado - Martin also had our only walk of the night. Parra now has 40 doubles for the season. 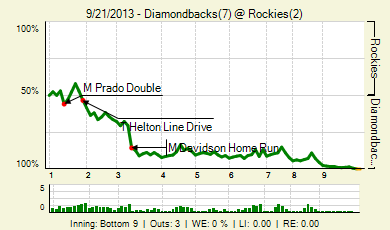 Really, considering this was a Saturday night game between two teams with nothing significant left to play for, it was a surprisingly-lively Gameday Thread. TolkienBard led the way, with asteroid and Rockkstarr12 heading the rest of a pack which also included AzDbackfanInDc, FatBoysEatMeat, GuruB, Jim McLennan, RaizAl, azshadowwalker, coldblueAZ, hotclaws, kishi, onedotfive, porty99, rd33, soco and xmet. A little light on the recs, however, with a grand total of three being handed out in total. I'll give the Comment of the Night to TolkienBard, for optimism which, while perhaps reckless at the time, proved to be marginally justified:

with only two outs to go.

I’m actually feeling really good about this one.

More of the same tomorrow? We have Patrick Corbin taking the mound - early in the season, that would be about as sure a thing as you could want, but of late... Well, not so much. We'll be coming to you live tomorrow from a group setting, at a secret location in [redacted], so should me for interesting reading.