How many All-Star Games would Babe Ruth have played?

Al over at Bleed Cubbie Blue wrote about the SABR Retroactive All-Star Game project, and it got me thinking...

Share All sharing options for: How many All-Star Games would Babe Ruth have played?

The All-Star Game started in 1933, which was late in Babe Ruth's career - he had already played 20 seasons in the majors, and at the age of 38, it's probably safe to say that Ruth's best years were well behind him by the time he got to appear in a midsummer classic. His 1933 season may have been the first All-Star Game for the Babe, but was only his 15th-best, as measured by bWAR. So, if there had been All-Star Games from the start of his career in 1914, how many would he have had in total? Would he be close to the record of 21 times seasons on the roster, set by Hank Aaron?

There are obvious caveats to point out in advance. Firstly, we don't have complete historical information. The full record of baseball games and box-scores doesn't go back as far as you'd think. For instance, gamelog data is only complete back to 1916, and even more recent numbers are subject to change and revision. For example, it wasn't until decades later that it was officially acknowledged there had been an error in Roger Maris and Mickey Mantle's numbers for 1961 - one of the most famous and scrutinized seasons in baseball history. .The changes cost Maris sole possession of the RBI crown, but gave him the Runs Scored one. The stats giveth, and the stats taketh away...

Just as obviously, we can't reproduce anything like the current circumstances, where contemporary fan voting picks the starters for each side, with players and the team managers selecting the other spots. While the Retroactive All-Star Game project is a good facsimile. we can't measure with any degree of certainty how popular Ruth was, both with fans in his day, or with those who played alongside or opposite him. He was only once voted MVP, despite leading all position players in bWAR 11 times. However, there was no award between 1915 and 1921, and previous winners were disqualified up until 1930, ruling him out after his 1923 unanimous selection.

Personal favoritism certainly plays a significant part in manager selections too - we see that every year, with managers tending to pick many more of their own players than perhaps they should [see Bob Brenly, stuffing the 2002 NL All-Stars with the likes of Damian Miller and Junior Spivey]. The bottom line is, we can't tell with any certainty whether, in any given year, someone less objectively deserving might have been picked ahead of Ruth - or possibly the other way around, particularly later in a career, when legend tends to supersede actual production.

Also note, I am going off stats for the whole of the season in question, even though All-Star voting is based almost entirely on early-season performance and fan bias. [Is there anyone who looks at stats from All-Star break to All-Star break to determine their ballot?]. This is purely for pragmatic reasons: while Fangraphs.com does allow you to request splits for the first and second half, for years when there wasn't an All-Star Game break, those splits appear to have no meaning. I could, I suppose, pull the splits for April, May and June, and add them together for each season... But life's too short. This is a bit of fun. Sue me. :)

After being converted from a pitcher (and we'll get to that side of things later), he was pretty much an outfielder his entire life - the record isn't complete, but shows only 23 starts at first. It seems safe to assume he would be seen as an out-fielder for All-Star purposes. I am going off the 2013 selection rules and NL roster, which means 34 players on each side. Six of those were outfielders, excluding Michael Cuddyer, who started at DH for the National League, a position that didn't exist in Ruth's day.

In lieu of subjective assessment, my metric of choice is fWAR, which I think tends to give the most well-rounded overall indication of a player's actual value. There typically isn't any particular assessment of position for All-Star Game selection, which is why we saw Justin Upton playing CF a couple of years ago. Therefore, to qualify as a starter, Ruth needs to be among the top three outfielders in the league for the year, regardless of whether this results in a trio of right-fielders. To make the All-Star roster, he should be in the top six.

Damn. By my reckoning, that's fourteen of fifteen years Ruth was good enough to be a starting outfielder for his league in our hypothetical All-Star Game. I needn't even have bothered picking reserves, since he didn't finish lower than third in any season between 1918 and 1932, except for 1925. That was the season where Ruth's illness - described by sportswriter W.O. McGeehan of the New York Tribune as "The bellyache heard ‘round the world" - restricted him to 98 games, though he still hit 25 home-runs and was worth 3.6 WAR.

And, damn. when Ruth was good, he was in a different league. Even while subsisting on a diet that would make Mark Grace v.2011 express concern, those were seasons for the ages he posted. Seven American League position players have put up seasons worth 12 or more WAR. Babe Ruth is six of them, between 1920 and 1927 - the seventh is Ruth's teammate on the 1927 Yankees, Lou Gehrig. [As an aside, Mike Trout's 10.2 figure so far this season is the best anyone in the AL has produced in the past 20 years]

It's almost impossible to grasp just how insanely good Ruth was at his peak. In 1923, the only season he was voted MVP (for reasons discussed above), he was worth 5.8 WAR more than the second-best player: that's almost an entire Goldschmidt - he's at 6.2, excluding last night. As a comparison, in 2001, Barry Bonds was 2.6 WAR better than the runner-up. The 15 WAR Ruth was worth, is more than two Goldschmidts PLUS an Aaron Hill - or put another way, equal to our entire offensive roster this season except for Paul. 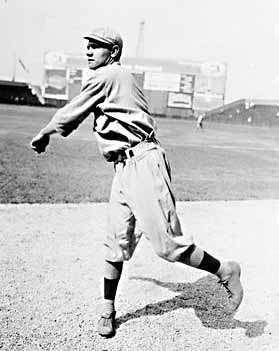 Ruth as a pitcher

But, wait! There's more! Because let's not forget, Ruth was initially a pitcher, and a damn good one as well. Might he have made it to the All-Star Game in that role too? There are two seasons which we should look at, 1916 and 1917. Those are both years his bat wouldn't have merited qualification, but in 1916, he went 23-12 with a league-leading 1.75 ERA, and was hardly any less effective the following year, going 24-13 with an ERA fractionally above two. The 2013 NL roster included ten starting pitchers, so would those campaigns have been good enough to qualify Ruth as one of those slots?

Hell, yes. In 1916, Ruth's 5.4 WAR was second only to Walter Johnson's 9.6 among American League starting pitchers. The following season, he wasn't quite as impressive, but a 3.7 WAR still ranks the Babe as the 6th-best hurler in the American League that season, with Johnson again taking the top spot. In addition to all the other amazing feats throughout his career, it's likely that, if there had only been such an event, Ruth would have been the only player in baseball history, to appear in the All-Star Game both as a hitter and a pitcher.

Add those two seasons to the 14 above, as well as the two in which he actually played, and you get 18 seasons in total, for which Ruth's play can be considered of All-Star quality. That's just short of Aaron's 21, with Willie Mays and Hank Musial on 20, and Cal Ripken's 19 also coming in ahead of Ruth. I'll be curious to see how many appearances he receives in the Retroactive All-Star Game project, when it's completed next spring.

Every baseball fan knows that the first All-Star Game was played in Chicago in 1933. But calls for a midseason All-Star contest go back to the offseason of 1915-16, starting with this article that appeared in Baseball Magazine. We can't go back in time to change history and replay those lost potential All Star Games on the field. But with a good game simulator and the recent availability of midseason stats going back to 1916, we can arrive at a good idea of who would probably have played those All Star Games and how they might have turned out.

That's is being done with the Retroactive All Star Game Project: using the statistics available at Baseball Reference for the first halves of the 1916 through 1932 seasons, midseason All Stars will be determined; and using OOTP 14, the games will be played. And as they did in 1933, the fans-meaning you-will get to vote for the All Star game starters, including starting pitchers, which is how they did it back then. So, no designated hitters. Starting right now, you can vote for the 1916 All Star starters and pitchers:

Voting is open until 3:00am east coast time on 9/27/13; 12 midnight west coast time. At that time, the votes will be counted, rosters assembled, and the game simulated. Then - and here's the best part - the box score and the game account will be posted, written in 1916-style, on Seamheads.com the following week. And while you're waiting for that to appear, you'll be able to vote on the 1917 All Stars. Rinse and repeat, every two weeks, until each All Star game through 1932 has been played. You'll be able to keep up with all the results through the Retroactive All-Star Project Homepage.