The D-backs took a two-run homer by Paul Goldschmidt in the first and rode that all the way to victory in the series opener at Chase. The win means that the Dodgers won't clinch the division for at least another day. And tomorrow's not looking good either....

Share All sharing options for: Diamondbacks 2, Dodgers 1: Not (yet) in our house...

This was only the third time in franchise history that the D-backs have won, despite being held to two hits or less. The first time was in July 2008, when Randy Johnson beat the Cubs 2-0, as we scored on an Alex Romero homer and Stephen Drew RBI triple. The other was in May 2011, and was also against Los Angeles: Josh Collmenter got the 1-0 win, with Melvin Mora driving in the winner with a sacrifice fly [we mentioned this one after the Petit game, when we were reviewing the history of the D-backs being one-hit]. Today, the offense was again just enough, and though Collmenter didn't get the win, he certainly played a pivotal role.

It took Trevor Cahill 27 pitches to get through the first inning, although that did include a very nice three-pitch strikeout of Adrian Gonzalez, who had previously owned him. He allowed a lead-off single and a two-out walk, which was really more a pitch-around of Y*s**l P**g, but got the final out. That started a streak of 13 consecutive batters retired by Cahill, and it only took him 45 additional pitches to get from the end of the first through the end of the fifth. Through that point, he had shutout the Dodgers on one hit, and was looking pretty good. However, the wheels then fell off Cahill completely in the sixth - starting off by a walk to the opposing pitcher.

His next pitch was dispatched over the head of A.J. Pollock to the left-center gap for a double, putting men on second and third, and he then walked the next batter on four straight pitches, loading the bases with no-one out. He did get Gonzalez to fly out to Willie Bloomquist in left, not deep enough for the pitcher to tag up, but his night was ended by the third walk of the inning, this one driving in a run. Josh Collmenter inherited the jam, but got a huge strike-out of A.J. Ellis, and then shattered Skip Schumaker's bat into a million pieces: Aaron Hill dodged the shrapnel and threw out the runner at first.

Collmenter also pitched the seventh, retiring the Dodgers in order, and David Hernandez came in for the eighth. He got the first out, but then grazed the next hitter with a pitch, which inevitably brought in Dee Gordon to pinch-run. During Gonzalez's at-bat which followed, between the pick-offs, fouls and feints, entire mountain ranges formed and glaciers started looking at their watches and tapping their feet pointedly. However, it ended happily for the D-backs, with Hernandez getting the pop-up, and then struck out the P**g to end the inning, and leave the home team still holding on to their one-run lead after eight innings.

That lead came courtesy of Paul Goldschmidt, who unloaded his 32nd home-run of the year, just to the right of the batter's eye, with one out in the first - as in the last time we faced Hyun-Jun Ryu, we were able to get to him early. That was a two-run shot, as A.J. Pollock had walked to lead things off, giving Goldschmidt RBI #115 and #116, and sole possession of third spot on the franchise RBI record list. It also tied Pedro Alvarez as the National League home-run leader. However, unlike last time, when we totaled 10 hits off Ryu in six innings, we weren't able to do much more.

Well, by "much", I actually mean "any". As after Goldschmidt's single after one Diamondbacks had been retired, we managed just a single base-runner, all the rest of the way. That came with two outs in the seventh, Aaron Hill singling to left, but otherwise, Ryu's array of off-speed stuff was basically unhittable: he was throwing just about everything he wanted, where he wanted it, when he wanted it. However, the damage had already been done, and Ryu ended up becoming the first opposing pitcher to face the Diamondbacks, pitch a complete game allowing two hits and still take the loss. Hahaha! Ryu are dead!

Of course, it wasn't easy in the ninth. Seems it never is. In this case, three pitches in, the Dodgers' first two hitters had both swatted singles through the infield off Brad Ziegler. However, the tide turned when the next hitter tried to lay down a bunt: Ziegler bounced off the mound and threw across to Prado at third for the force. A ground-out to Goldie advanced both men, and the Dodgers sent Matt Kemp up to pinch-hit. Now, with a base open, this seemed an obvious intentional walk scenario, but Kemp was just off the DL and this was his first at-bat since July 21. Gibson and Ziegler opted to pitch to him, and I readied an article entitled "When you should intentionally walk people."

However, that one gets to go on the back burner, as Ziegler got Kemp to swing at a nasty, sweeping pitch for strike three, getting his 11th save - even if Collmenter probably "saved" the win as much as anyone. It improved Trevor Cahill's record to 7-11, as he ended the night with one run allowed over five innings, on two hits and four walks, with four strikeouts. It's his third consecutive start with four walks, and a K:BB ratio of 12:9 over that time is concerning. Still, the Diamondbacks won, keeping the Dodgers' magic number at four. Should you care, the Reds won, and the Nationals' game was postponed due to the unfortunate events in Washington. 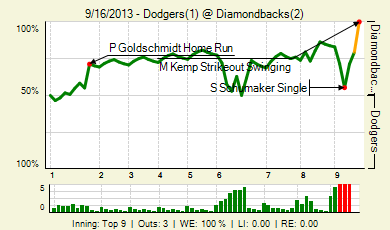 We reconvene at Chase tomorrow night - no, literally at Chase, as it's SnakePitFest (brought to you by Asteroid), beginning at the Rose and Crown, before moving over to the park. At least we won't have to endure the sight of the Dodgers' celebrating in front of us tomorrow night: who knows, if Patrick Corbin can stave them off, we'll have a real shot at it not happening here entirely. That'd be nice.