Miguel Montero got three hits on his bobblehead night and Wade Miley became the second lefty to record 10 wins for the D-backs in consecutive seasons. All told, not a bad evening.

Share All sharing options for: Diamondbacks 9, Rockies 2: Bobbling to victory

Seems like a plan to me. Take pics of the entire 25-man roster, digitally combine them into one, probably bland yet creepy-looking dude, and turn him into a bobblehead without a name, number or identifying marks. Repeat all season, and hey presto, we'll be the first team to go undefeated at home. [On a whim, I just looked up who had the best ever home record: that would be the 1961 Yankees, who went 65-16. Damn, that's some home-field advantage.] Seems like a foolproof plan to me.

It didn't initially seem that it'd be easy. Both teams sent the minimum to the plate in the first: we got Troy-boy to hit into a double-play, but Roy Oswalt responded by striking out the side in the first. You can imagine how that felt, coming from a man who entered the night possessing an 0-5 record and 8.57 ERA this year. Something something Yusmeiro Petit. However, that turned out to be more an aberration. As the Rockies seem to like to do, Oswalt didn't get through the fifth inning and ended up taking the loss, becoming the second NL pitcher this season to lose six consecutive starts [Cole Hamels of the Phillies did it in June].

Things went rather better for the Diamondbacks in the second inning, after Wade Miley had set the Rockies down in order. With one out, bobblehead honoree Miguel Montero singled and Matt Davidson followed up with a double. Gerardo Parra then fell behind Oswalt 0-2, but recovered to smash the ball into the right-center gap, rolling all the way to the wall and bringing both men home. That'd be the last of the scoring for a while. Parra lined into a double-play with two on to end the fourth inning, and Martin Prado popped out to second with the bases loaded, ending the fifth, immediately after the arrival of the Rockies bullpen.

However, if the D-backs relief corps had melted under pressure last night, it seems fair enough that it was the visitors who would crumble this evening. Over 3.1 innings of work, Arizona swatted around the Colorado bullpen for nine hits, two walks and seven earned runs. That shouldn't come as much of a surprise, because perhaps the most consistent trend this season has been our late inning dominance. Through the first four innings of games, we've been outscored by the opposition 237-289. But from the fifth on, the shoe is very much on the other foot, with the D-backs burning past by the tune of 382-331.

Tonight, Parra continued to power the offense, blooping - or bobbling, if you prefer - a little double down the left-field line to score Montero from second, with one out in the sixth. One out later, Miley shot one over the head of the shallow Rockies outfielder in left, to make it 4-0, and give him the second multi-hit game of his career. Our next time up, Aaron Hill led things off by driving his 10th home-run of the season down the line into the left-field bleachers, and Prado added a sac. fly later. Finally, in the eighth., Adam Eaton had an RBI double, and Hill completed the home cooking with a two-run single.

Meanwhile, Wade Miley pitched a very solid game, particularly through the front six innings. He didn't just keep the Rockies off the board, he held them to three hits, all singles, and a walk, limiting them to two plate-appearances with runners in scoring position. They came up empty in those, but it did seem that Miley ran out of gas in the seventh, as Colorado banged out three consecutive knocks with one out, driving in two and sending him to a well-deserved shower. Josh Collmenter cleaned things up by retiring the two batters he faced, David Hernandez worked a perfect eighth and the Heath Bell Experience struck out two after a one-out single to seal victory. 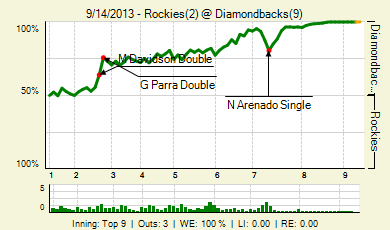 Rather quiet night in the Gameday Thread: wonder if ASU kicking off their meaningful football schedule tonight (sorry, Sacramento State: you don't count) had anything to do with that? Still, a decent crowd of over 32,000 at Chase, and they got to see a good performance. hotclaws, whose enthusiasm was much more justified this evening, led all commenters ahead of soco and myself. Also present: AzDbackfanInDc, FatBoysEatMeat, GuruB, JoeCB1991, blank_38, cheese1213, imstillhungry95, onedotfive, piratedan7, porty99 and shoewizard. Comment of the night to piratedan for his comment about life on the Depressed Side:

i'm pretty sure that the shelves are stocked

with plaintive sighs, generic bobbleheads, t-shirts two sizes too small and a fair amount of eye-rolls and hurumphing for the entire family!

It's back to Chase tomorrow for the finale of the series, with Randall Delgado trying to be slightly less homer-happy than he was in his previous outing against the Dodgers. He faces the Rockies' Jhoulys Chacin. I'm not sure if I spelled that right. Anyhoo, first pitch will be at 1:10pm, and it'd be nice to win a series, considering we haven't yet done so in September.