Dbacks 1, Dodgers 8: Juan what are you doing? Juan STAHP

Share All sharing options for: Dbacks 1, Dodgers 8: Juan what are you doing? Juan STAHP

It was a woeful game all around for the Dbacks. The pitching was absolutely horrid with Randal Delgado giving up 5 earned runs in 2.2 innings. The bullpen wasn't much better either giving up 3 earned runs after Delgdo left. The offense was a non-entity as well; only mustering an anemic 4 hits. The story was quite the opposite for the Dodgers who went off for 12 hits, half of which were homeruns. The pitching was almost as good, only giving up 4 hits and striking out 10. All in all this game was pretty horrific and I feel like if our season wasn't already over it is now. If you didn't catch it on TV, count yourself lucky and I don't recommend you of your way to catch a replay. 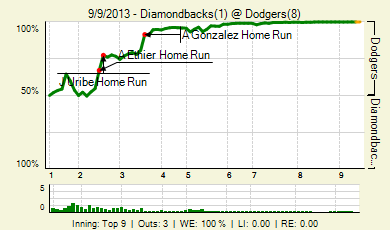 Almost Awful but not quite: Chaz Roe .02%