If you had removed the names from the box-score at the end of the fourth, and asked which pitcher was the one who had struck out nine batters, and which one had allowed four runs to that point, you'd probably not have guessed right. Because Yusmeiro Petit pitched more like The Petit Unit, and Patrick Corbin seems to be wearing down.

The first frame looked promising, as Patrick Corbin retired the Giants in order on nine pitches, and Arizona took the lead. Adam Eaton singled, and after Martin Prado started September as he finished August, with a hit into left-center, it looked like we'd have men on the corners. But the Giants' center-fielder apparently believed the same thing, lollygagging the throw in, which allowed Eaton to score all the way from first, and Prado to hustle into second. Sure, Petit struck out the side around the two hits, but that was surely an aberration.

Except, he added another three K's in the second, after the Giants tied the game. Corbin allowed a pair of hits to lead things off, and though he got a strikeout, a ground-out scored the man from third. Much worse was to follow for Patrick in the fourth, after a single and double put men on second and third with no outs. He got a shallow fly-ball and ground-out to third, with the runners holding, and came within one strike of escaping with the scores tied. However, it took four attempts to get the last out, with the Giants scoring three. They added a solo home-run in the fifth, and it would have been worse, except former D-back Tony Abreu got himself picked off first earlier in the inning.

Corbin's final line was nine hits and a walk over five innings, with five strikeouts and five earned runs. Combined with his poor last start in Philadelphia, that gives him a line of:
Corbin: 10.1 IP, 16 H, 14 R, 13 ER, 4 BB, 9 K, 11.32 ERA
Small sample size, obviously, but there's a credible case that Corbin has simply run out of gas, and it might be better to err on the safe side and shut him down. His total of innings this season is now 182.2: that isn't actually more than last season (186.1, between the minors and majors), but there's no doubt that he has been nowhere near as effective recently. With the team pretty much out of contention, there's no point risking it.

Meanwhile, Yumeiro Petit was pitching more like... someone who isn't Yusmeiro Petit? The real key seemed to be pinpoint accuracy. He was simply locating everything he threw, where the D-backs couldn't get really good swings on it. He struck out a career-high 10, walked one, and again, didn't allow a long-ball. Obviously, this is a really small sample-size (and his AAA numbers were nothing particularly to write home about), but on the basis of today's performance, I wouldn't be surprised if he finds a spot in a rotation somewhere next season. Surprised to realize that he's still only aged 28.

It was pretty much a case of "anyone but Petit" for the Diamondbacks' offense. He allowed a single to A.J. Pollock, leading off the seventh and was lifted, with a four-run lead. But the Giants bullpen looked a tad wobbly: with two outs, Willie Bloomquist and Adam Eaton singled, bringing home a second run, and that meant Paul Goldschmidt came to the plate, representing the tying run. He gave it the ol' college try, but flew out to center, and the chance to narrow the gap further disappeared.

The Diamondbacks bullpen did provide three innings of scoreless ball. Chas Roe worked the sixth and seventh, Tony Sipp threw up a zero in the eighth, though Heath Bell then came in and royally Bell'd things up, retiring one of five batters faced, and being charged with three runs. On offense, Willie Bloomquist, Adam Eaton and Martin Prado each had two hits. But a K:BB ratio for the day of 13:1 tells you pretty much all you need to know about this afternoon's offensive performance, even if home-plate umpire C.B. Bucknor had some astonishingly poor calls, such as the alleged strike three to Tony Campana,. which must have been close to a foot outside the strike-zone. 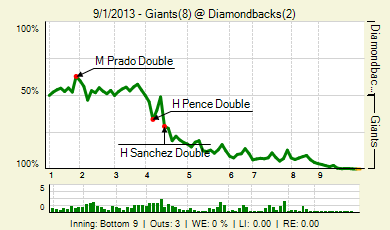 Gameday Thread in about the same range as yesterday, just shy of 200 total comments, and I'd be hard pushed to claim the game deserved significantly more attention than that. onedotfive led the way, just beating out Fangdango and myself. Also present: 4 Corners Fan, AzDbackfanInDc, AzRattler, BrokeNBattleX, Dbacks4eva10101, Diamondhacks, FatBoysEatMeat, GODSCHMIDT, GuruB, Husk, The so-called Beautiful, asteroid, azshadowwalker, cheese1213, cole8865, hotclaws, piratedan7, shoewizard, soco and txzona. Comment of the day to shoe, which is impressive, considering he only made one, and it came right at the very end of the game!

Just looked up "The Heath Bell Experience on Web MD

symptoms include extreme bloating and always leads to the runs

It's the Blue Jays who come to town tomorrow, as we finish off interleague play. It's Labor Day, and that means we get to enjoy a day game, so remember the first pitch is at 1:10pm. Brandon McCarthy starts for the Diamondbacks, with the visitors sending up Esmil Rogers.