Diamondbacks 4, Giants 3: Black to the Future

The Diamondbacks had a three-run lead, only to lose it in the seventh. However, that was simply setting up yet another walk-off win for the crowd of over 36,000 on hand at Chase Field for Alumni Night.

Share All sharing options for: Diamondbacks 4, Giants 3: Black to the Future

Looks like I'm pinch-recapping this one, Marc not having replied to my politely inquisitive email regarding his recapping status. Apologies in advance, since my actual viewing of the game was pretty minimal: I'll largely be going off the box-scores and the reported level of angst or exultation, as provided by the Gameday Thread. So if I say anything dumb, it's not my fault, people....

I was wondering in the preview which version of Trevor Cahill would show up, and the first inning suggested it wasn't the good version, as he loaded the bases on a walk and a pair of two-out singles, before getting the Obese Raccoon to fly out. That was the start of a much better stretch for Cahill, who gave up his share of hits, but also generated his usual share of ground-balls, leading to crucial double-plays in both the fourth and fifth, in both cases when the Giants had two men on-base. The latter was particularly fortuitous, after the first pair of Giants reached; another ground-out left the runner stranded on third.

After being shutout last night, the Diamondbacks' offense took a while to show up tonight as well. Inevitably, it was Martin Prado who got the first hit for Arizona, one of three for him. That completed a red-hot month, in which Prado piled up 43 hits, hitting .374 over August and raising his batting average 24 points. If he has a September like that, he'll almost certainly end the season hitting .300. You'd have got long odds against that on May 24, when he was hitting .232. The D-backs first real scoring chance tonight came with two-out hits in the third by Willie Bloomquist and Adam Eaton, followed by a Goldschmidt walk, but the line stopped there, Eric Chavez ending the inning.

There was no such escape for the Giants in the fourth, however. Prado led off with a double, and an Aaron Hill single put runners on the corners. Miguel Montero broke the deadlock with an RBI single, and Gerardo Parra made it 2-0 with a sacrifice fly. After Cahill bunted Montero to second, Bloomquist came through with an RBI single, scoring Montero. He was out advancing to second, but it should probably be classified as a sacrifice TOOTBLAN, since there's a good chance Miggy might have been dead at the plate, if the Giants hadn't been lured into cutting off the throw.

With one out in the bottom of the sixth and the score still 3-0 to Arizona, we loaded the bases again, and there was some debate about pinch-hitting for Cahill, since it was his spot that was up. At the time, he was still working on a shutout and had only thrown about 80 pitches, so I can understand Gibson's reluctance to pull him, in the hope of adding on. Cahill grounded in a force-out at home, and Bloomquist followed by ending the inning.

It probably isn't related, but Cahill in the seventh was a lot less effective. After a lead-off homer, he walked the next batter, who stole second, advanced to third on a wild pitch, and scored on an RBI triple. In the space of 18 pitches, Cahill had gone from cruising with a three-run lead, to having the tying run on third with one out. That was the end of his night: 6.1 innings, nine hits, three walks, and three strikeouts. He had conceded two runs, and was responsible for the man on third.

Eury de la Rosa came in and did what LOOGYs are supposed to do: get one out, fanning Brandon Belt. Josh Collmenter then replaced him, but couldn't repeat the feat: a single tied the game, the third run charged to Cahill and denying him a shot at victory. Chalk up another blown save to the Arizona bullpen - Collmenter's first of the season, actually, and he did put up a zero in the eighth. Our offense weren't able to score in the seventh or eighth, Hill flying out with two aboard in the former, the D-backs going down in order for the latter.

That meant, if the Diamondbacks were going to win, they would be doing it in walk-off style. Brad Ziegler came in for the ninth, and did his job, sending the Giants back to the dugout 1-2-3. Bloomquist continued to confound his critics (that would be me in the preview!), getting his third hit from the lead-off spot to open our half of the ninth, and was bunted over by Eaton (who almost legged out a hit), This lead to the inevitable intentional walk for Goldschmidt, but Chavez jumped on the first pitch and laced a line-drive to the gap in right center, through a despondent Giants outfield, who made little effort to retrieve it. 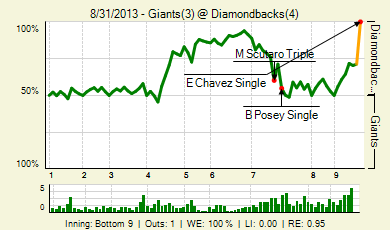 A pretty lightly-trafficked Gameday Thread, with about 200 comments in total. I actually had most, followed by asteroid and Fangdango, with others present being: BrokeNBattleX, CaptainCanuck, Dbacks4eva10101, Diamondhacks, FatBoysEatMeat, GuruB, Jim McLennan, RobbieFVK, The so-called Beautiful, azshadowwalker, blank_38, cheese1213, cole8865, ford.williams.10, hotclaws, imstillhungry95, onedotfive, porty99 and xmet. Comment of the Night?FatBoysEatMeat continues an impressive run of punditry, with another comment which would prove to be inaccurate before the night was out.

why is Gibson letting Chavy bat 4

Hes not 30 Gibby
He hasnt hit since DL stint

Yeah. About that.... It's back to Chase tomorrow afternoon, and the Diamondbacks have to be fancying their changes, with Patrick Corbin on the mound and facing a pitcher best described as a D-backs reject, in Yusmeiro Petit. First pitch is a little after 1pm, so we'll see you for that.