The finale of the six-game road trip sees the return of Brandon McCarthy. So that's nice.

To be announced. Given the expected early start, I'm writing this on Saturday evening, so your guess is as good as mine. But taking a stab, I'd guess it could well start with A.J. Pollock leading off, followed by Aaron Hill and Paul Goldschmidt, designated hitter Eric Chavez, Cody Ross, Martin Prado, Gerardo Parra, Wil Nieves and Cliff Pennington. I'll post the actual one in the Gameday Thread, which should be up a little before first pitch at 10:35 am, Arizona time. I won't be around, or at least, not for long, since we'll be watching the announcement of the next Doctor, scheduled for 11am on BBC America. I hope it's someone good. 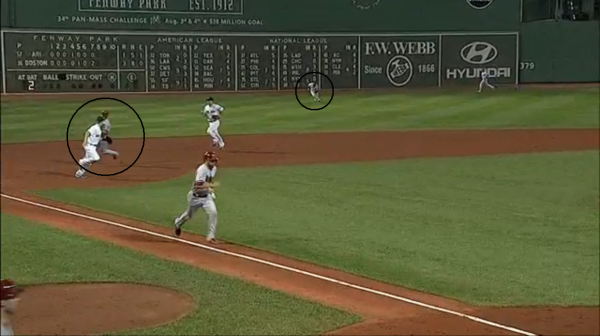 Still seething over the incompetence displayed in yesterday's (or "will be yesterday when this post appears, but is still today's right now") horrific eighth, which cost the D-backs a shot at victory they could barely afford to waste. The screenshot above shows the relative positions, as circled, of Gomes and Pennington, when the former gloved the ball: Cliff was still several paces short of even reaching third-base: I doubt even Adam Eaton, probably the fastest man on the team, could have scored. Pennington certainly couldn't, and instead of bases loaded, no outs, and the tying run on third, it was twice as far away, and ended up unable to score. I stand by my subsequent Tweets.

I think we fired the wrong base coach last winter...

Can we take the L looming for Corbin and attach it somewhere prominent on Matt Williams? Like, his forehead?

Pennington was 15th runner out at home for the D-backs this year. Only the Brewers (19) have more in the NL.

Any subsequent chance of recovery was then blown by David Hernandez, who has had an awful a 14-appearance spell as any Diamondback reliever I can remember. He came in to June 29th's game with a 3.68 ERA: not great, but certainly not the worst in the pen. However, since then, his line has been:
Hernandez: 12.1 IP, 13 H, 15 R, 14 ER, 6 BB, 12 K, 4 HR, 10.22 ERA
His season ERA is now up to 5.32, and his last five outings are worse still: seven earned runs over four innings, on six hits and five walks. At this point, I don't know what roster move the team might make to accommodate McCarthy, but a DL stint for DH may be the only option.

Still, as far as today's game goes, it'll be nice to have McCarthy back, and it's worth remembering that if we can win today, we'll come back to Arizona with a 3-3 split from the trip, against a trio of very tough opponents. Of course, even that isn't good enough, when the Dodgers seem almost unstoppable, but all the Diamondbacks can do is take care of their own business, and hope the possible loss of Puig for a bit will slow Los Angeles down. Xipooo will be your guest recapper for this one - if his power stays on! Hopefully, the D-backs' power will stay on too...