David Holmberg's major-league debut wasn't one many will remember, but it still went better than Ian Kennedy's return to Chase Field. Gerardo Parra drove in a career-high five, the bullpen blew two saves, and the D-backs won in extra innings. Like they do.

Damn. That was one of the most enthralling, infuriating, but undeniably most interesting four hours and 24 minutes of baseball I've seen in a very long time. It truly had something for everyone: great pitching, awful pitching, brilliant defense, poor base-running, clutch hitting, blown leads of three runs by San Diego and four by Arizona, all ending up in another comeback, double blown-save, extra-inning walkoff win for the Diamondbacks. Really, if there's a purely more entertaining game this season, I hope I get to recap it as well.

To say things didn't start well for David Holmberg would be putting it mildly. 23 pitches into his major-league debut, he had faced five batters, and failed to retire any of them, thanks to a combination of flaky defense bad luck and well-hit balls. The former reared its head on the first batter, who doubled to the gap in right-center, apparently startling Gerardo Parra, whose route to the ball was circuitous - he got a glove to it, but it clanked off the end for a double. The next hitter dropped down a bunt that Holmberg was a little slow to field, and the runner beat the throw. A pair of RBI singles and a walk gave the Padres a 2-0 lead, and they had the bases still loaded with no outs.

However, Paul Goldschmidt helped out with a great catch in foul territory, and although a sacrifice fly extended the San Diego lead to three runs, things could certainly have been worse. After the Diamondbacks were set down in order by their Opening Day starter, Ian Kennedy, Holmberg's second inning started with another double, by Kennedy: the Padres were 5-for-8 with a walk the first time through the order. However, Parra somewhat redeemed himself with a leaping catch of a line-drive smash over his head, and Holmberg was able to escape with his first major-league zero, despite some rather hard-hit balls.

The Diamondbacks turned things around in the bottom of the second, tying things up with three runs of their own. Martin Prado started things off with a single back up the middle, for Arizona's first hit, and Aaron Hill then walked on four straight balls from Kennedy. He started Parra off with two more out of the zone, and his next delivery was greeted rudely, Parra lining it just over the fence in right, for a three-run homer. That made him the third D-back this season to reach double-digits, after Goldschmidt (31) and Prado (13), and broke a three-way tie on nine with Eric Chavez, Miguel Montero and Aaron Hill.

Holmberg followed up his zero with his first 1-2-3 inning in the third, helped out by another nice play from the defense, this time by Didi Gregorius, roaming into left-center. But he got back in trouble during the fourth, walking two batters, including IPK, then a two-out single, that might have scored a run if Kennedy hadn't been the lead runner. Josh Collmenter got the final out to strand three runners. David's final line was 3.2 innings, six hits and three walks, with three ER. He didn't strike out a batter and threw 80 pitches, 46 for strikes, though wasn't helped by a tight, if consistent, strike-zone. His Game Score of 34 was... well, better than Wade Miley's debut (31).

Kennedy was struggling with control, walking the first two batters faced in the fourth. However, Arizona couldn't even move the runners over: Miguel Montero popped up, Gregorius struck out and Collmenter grounded out. Josh then struck out the Padres in the top of the fifth, and the D-backs took full advantage of Kennedy in the bottom half. Adam Eaton tripled, and scored on a Goldschmidt double: the bases were loaded after Kennedy issued a walk and hit Aaron Hill [OMG what an utter head-hunting bastard!], and Parra drove in two more with a 410-foot single off the wall in left-center. Kennedy left, having allowed six earned runs in 4.1 innings, pretty much proving why we dumped him.

Josh Collmenter was in line for his first W since June 27, retiring 10 of 11 batters faced over 3.1 shutout inning - Didi Gregorius finished the seventh off, with an amazing catch out in shallow left-center. Collmenter is now at 78.2 innings for the year and has an outside shot at the most innings pitched by a Diamondbacks without a start. That currently belongs to Byung-Hyun Kim, who threw an amazing 98 relief frames in 2001, more than eleven ahead of the next-most (Mike Koplove's 86.2 in 2004). Collmenter leads the NL in this category, and trails only the Twins Anthony Swarzak, who has 81 innings. He also scored the seventh run, on a bases-loaded walk in the sixth.

That proved helpful, as Chas Roe, Joe Thatcher and Will Harris supervised a patented eighth-inning meltdown for the D-backs. Roe walked the first two, and allowed a two-run double. Thatcher failed again to retire the only batter faced, giving up an RBI single, and Harris got the second out, but then back-to-back singles which tied the game at seven. However, after walks to Tony Campana and Goldschmidt, Martin Prado ripped a double down the line in left, scoring both to make it 9-7. Goldie's three walks give him 83 on the season, already tied for fifth on the team all-time list. He needs 17 to match Gonzo's round hundred from 2001, and with a month left it's far from impossible.

Brad Ziegler was brought in for the save, and didn't. The Padres went triple, walk, RBI single, RBI single to tie things up. It could have been worse: with the bases loaded and one out, a fly-ball down the right-field line required a firing of the Parrazooka at full intensity, and Prado then showed amazing defense to snare an absolute screamer down the line at third, to get out of the top of the ninth without further damage. We then had a chance of our own. With two on and no out, an Eric Chavez groundout put runners on the corners, but Campana struck out looking, and pinch-runner Cliff Pennington got caught and hung up between third and home on a not-quite wild enough pitch.

The 10th brought us the Heath Bell Experience, but it proved surprisingly drama-free, as he retired the Padres in order. Eaton and Goldschmidt singled to get us going in the bottom half, and after Eaton advanced on a Prado sacrifice fly and Goldie took second on defensive indifference, the Padres opted to bring in a fifth infielder and work to Aaron Hill. He got the count full and despite the open base was still pitched to: he made San Diego pay, with a long single to left-center, bringing Eaton home for our eight-millionth walk-off victory of the season (approximately).

So many good performances. Of our position players, only Gregorius and Campana failed to get on at least three times. Goldschmidt led the way with two hits and three walks, while Prado reached base safely four times, with two hits and a pair of walks, driving in three. Eaton enjoyed a three-hit night and Montero had his first multi-hit game since coming back off the DL. The two sides combined for 26 hits and 17 walks; the Padres also hit no less than three of our batters - which if I was a Dodgers fan, would have me rioting in the streets and demanding drone strikes on San Diego. 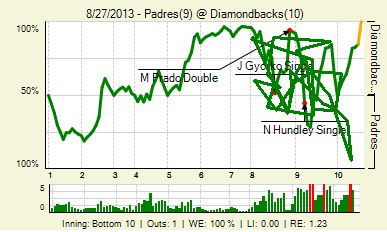 After the D’backs go on a historic run.

Ian Kennedy Woke Up The Diamondbacks

Speaking of which, the Dodgers and, for now more importantly, the Reds lost, leaving us five behind in the wild-card. Not pronouncing us back in the race yet, but... We face the Padres again tomorrow night at Chase Field, with Wade Miley starting for us, as we go for the sweep.