You didn't have any plans for Saturday night, did you?

The longest game in the history of the Diamondbacks took place yesterday and today in Philadelphia. That sentence alone tells you a lot, but this game didn't just drift a little past midnight: it finished after 2am local time. So many records were set here - and it seemed so unlikely as the D-backs tore into the Phillies in the early stages. Their starting pitcher recorded only two outs, before having to leave the game - initially it just looked like some hard-core suckage, as he had walked three and allowed three hits, including a two-run homer to Prado. But I seem to recall subsequent reports of a heel issue. That may have been someone else. It all seems so long ago....

Wil Nieves added an RBI single in the inning, we got a Paul Goldschmidt groundout in the second, and another run came home on a Cliff Pennington double-play in the third. In the top of the fifth, Gerardo Parra made it 6-0 with an RBI single. Oh, and at that point, Randall Delgado was pitching a no-hitter through four innings. If you'd told me at that point, the game would last about five more hours, I'd have wanted some of what you were smoking. The no-hitter lasted exactly one Phillie batter after txzona mentioned it in the Gameday Thread [I hit the remakr, but I guess wasn't quick enough to fool the baseball gods], Carlos Ruiz homering to end the shutout.

Still, an Adam Eaton single in the top of the sixth restored the six-run advantage. Even after Delgado allowed another home-run and a run scored on a wild pitch in the home half, we still had a four-run lead, and Will Harris kept it that way in the seventh [Delgado finished with a line of three runs allowed over six innings, on three hits and a walk with six strikeouts. Not many pitchers get a quality start for throwing one-third of the innings pitched by his team...]. Six outs needed, what could possibly go wrong? Joe Thatcher and Heath Bell, that's what. The former retired one of three batters faced, and that on a run-scoring sacrifice fly, the latter coughed up an RBI single and two-run homer. See that blown six-run lead? That's yours....

And then the fun started. After combining for 14 runs over the first eight innings, neither team could get even a single man home for the next eight. For us, Josh Collmenter duly Collmentered for 2.1 innings; Eury de la Rosa got a single out (and so will probably be de facto long relief for tomorrow); Chaz Roe retired all four batters he faced; Brad Ziegler put up a pair of zeroes, and then Trevor Cahill, who pitched seven innings on Thursday, came in on one days rest to throw four more innings, in the first relief appearance of his major-league career. Yeah, that pretty much deserves the W, I'd say.

Meanwhile, the Diamondbacks were leaving a small arm... no, just make that "an army" on the basepaths. Probably the best chance came in the 10th inning, when Tony Campana and Eaton led off the inning with singles. On a Goldschmidt sacrifice fly, Campana tagged up and went to third, and it seemed obvious for Eaton then to steal second-base - it wasn't as if the Phillies could throw down there, because the second they did that, Campana would whizz in from third to take home. However, the coaching staff inexplicably failed to realize that, and Prado inevitably grounded into a double-play - one of four by the D-backs.

Instead, they had to wait for eight more innings, and for the Phillies to run out of pitchers. They turned to Casper Wells, who had already thrown an inning earlier in the year for the White Sox. Featuring a 91 mph fastball, he got the first two outs easily enough, but then walked Campana, and on a hit and run, Eaton lined a ball into the outfield gap, allowing Tony Wheels to come all the way around and score. Wells melted down thereafter, and by the time former D-back John McDonald finally got the third out, Arizona had pushed across a total of five runs. Trevor Cahill allowed a two-out double to prolong things slightly in the bottom of the 18th, but got the out, and it was finally, mercifully over. 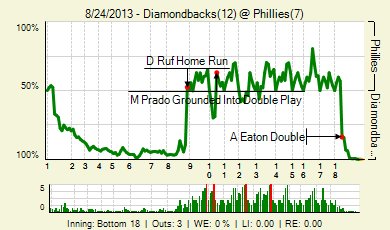 [Click to enlarge, at fangraphs.com]
I'm not even going to do the usual listing, as we have five pitchers and three position players at +10% or better. Trevor Cahill led the way at +39.7%, while Heath Bell sucked hardest at -40.9%, one of five players worse than -10%. Click on the pic if you want the full details. Oh, and Casper Wells, hitting and pitching, totaled out at -75.4%

So many credible CotD, in one way or another. I'm tempted to go with Robbie's "If the Phillies walk Tony Campana twice in one game, they deserve to lose," but instead I'll give it to Xipooo for his sardonic comment on other walking wonder:

- "They must be terrified of my gap power." – Cliff Pennington

First pitch on Sunday is in about ten hours. Patrick Corbin starts for us; don't know who the Phillies will be using, as their scheduled starter threw five innings of scoreless relief. Me. I've got to start work on the preview for that one...