This wasn't quite the start we wanted for a crucial series in Cincinnati. The offense was meh, and Randall Delgado was meh-er, as the Reds expanded their lead in the wild-card to six games. Though at least the Dodgers lost...

We threatened briefly in the first, on singles by Adam Eaton and Paul Goldschmidt, before Aaron Hill hit into the D-backs daily double-play to end the inning. That started a run of 10 outs in a row for Bronson Arroyo. After Randall Delgado set them down in order to start his evening, the Reds got on the board in the second. A high fly-ball got Eaton stuck in no-man's land between making the catch and playing the carom off the outfield wall, and it ricocheted past him for a lead-off triple. Though Delgado got an infield pop-up, with one out the ball was hit to Eaton, whose throw home skidded past Wil Nieves, though the runner would likely have scored anyway.

However, as Hill started the series of outs by Diamondbacks, he ended it in emphatic fashion with two outs, cranking his ninth home-run of the season just over the fence to left, extending his hitting streak to 12 games and leveling the score at one. The tied game didn't last. A mere eight pitches into the next inning, the Reds had adopted a very aggressive apperach, taking Delgado for four straight hits - and no cheapies - followed by an RBI groundout, scoring three runs. It kinds showed the problem with Delgado: he doesn't strike out many people (one of the first 18 faced today, and that was Arroyo), so on some days, there can be a lot of balls in play, leading to a lot of hits.

The key factor tonight was his longevity, because with the taxed bullpen, the team really needed him to go fairly deep into the game. Through the first three innings, that seemed to be working fairly well, as he took 50 pitches to get through those. However, a 25-pitch fourth followed by a 21-pitch fifth was problematic, and he also struggled with his control (albeit getting no help from the home-plated umpire), walking more than usual (three). Delgado allowed his usual home-run in the fifth, though at least it was a solo shot. That made the score 5-1, and at least made it seem unlikely that we would need to pitch to the Reds in the ninth.

Under other circumstances, he probably wouldn't have been send out there to work the sixth, but because of the thin bullpen, Delgado was squeezed, and responded with a solid 1-2-3 inning. His final line was six innings of work, five runs allowed on seven hits and three walks, with six strikeouts. Randall threw 114 pitches, which was four more than his previous career high. Joe Thatcher and Will Harris worked the seventh and eighth between them. I continue to be unimpressed with Thatcher: two of the three left-handed batters he faced reached base safely, though Harris looked good, striking out both hitters he saw.

The Diamondbacks did at least make things interesting in the top of the sixth, cutting the Reds' advantage in half, thanks to a Martin Prado single with the bases loaded. Gerardo Parra singled, and Paul Goldscmidt got a 50-foot squibber off the end of the bat that couldn't have been placed more perfectly. Arroyo then hit Hill, setting the stage for Prado to dump one into left-field, making the score 5-3 and putting the tying run on base with one. However, Jason Kubel grounded out weakly and Wil Nieves fouled out. Our only runner after that in scoring position was Didi Gregorius, who singled to lead off the seventh and took second on a passed ball, only to be stranded there.

Hope flickered briefly into life, as we faced the flame-throwing Aroldis Chapman in the ninth, and Kubel, of all people, greeted him with a single back up the middle to bring the tying run to the plate. However, Nieves hit into a double-play and, though Cliff Pennington came then off the bench with a pinch-hit single, A.J. Pollock flew out to end the game. We actually outhit the Reds 10-8: Goldschmidt and Prado each had a pair of knocks, but we didn't put up a single walk, which is never a good sign (NL teams without a BB went 44-100, coming into today). 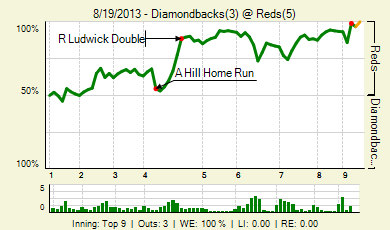 Life's a riot with Parra vs. Parra. We'll be hoping for better tomorrow, with Patrick Corbin taking the mound for us, facing Tony Cingrani of Cincinnati, in another 4:10pm start, Arizona time.