It was getaway day in Pittsburgh, so of course it turned into another classic D-backs marathon. The Arizona bullpen worked eight scoreless innings, and Adam Eaton came through with a two-run single in the 16th, as the visitors took the series.

The Pirates struck first. After getting the opening two outs easily, Wade Miley was (over?) cautious to Andrew McCutchen and walked him. The old "two-out walks always score" saw proved true in this case, as the next batter doubled, to bring McCutchen around, and give Pittburgh an early lead. They then doubled in in the third, with another RBI double, but Miley then settled down nicely, keeping the home side off the board the rest of the way.

Meanwhile, it looked like the D-backs were going to struggle against Charlie Morton from the get-go, as he struck out the first four batters he faced. And that proved to be the case, through the first five innings. The only runner past first base over that time was Aaron Hill's ground-rule double with two outs in the fourth. The Diamondbacks only had Gerardo Parra's single prior to that. Didi Gregorius singled to lead off the fifth, but was immediately erased on a double-play from Tuffy Gosewisch.

Things changed in the sixth, with the Diamondbacks tying things up at two, though it felt more like a wasted opportunity. Adam Eaton and Martin Prado started things off with back-to-back singles and a walk to Paul Goldschmidt then loaded the bases with no out. Hill lined the ball into left-field to put Arizona on the board, and keep the bags full, generating hopes of a really big inning. However, Parra hit into a double-play which, while tying the game, killed any momentum: A.J. Pollock's ground-out ended the inning.

An equally big chance was squandered harder in the sixth. Gregorius and Gosewisch walked and singled respectively, and were then bunted over by Miley. Adam Eaton was hit on the elbow to load the bases with one out for Prado, who did something he rarely does: swing at the first pitch. However, he lined it right at the third-baseman, and no-one could advance. Paul Goldschmidt had the chance to come through with another big hit, but struck out - hard to blame him, when home-plate umpire Mike Estabrook's strike-zone was a) awful, and worse still, b) horribly inconsistent.

The eighth inning was a nice exhibit of the futility of the sacrifice bunt. Both sides got their lead-off man aboard, then gave up an out to move him over to second. However, both runners were stranded - in the bottom half, the decision by Clint Hurdle presented Kirk Gibson with the simple decision to walk McCutchen, and let Miley pitch to Russell Martin instead. He struck out, and on the play, the runner tried to advance from second to third and was nailed there. It was the second TOOTBLAN by Pittsburgh in consecutive innings, as they had a runner picked off in the seventh.

It was another solid start for Miley, who went eight innings striking out eight batters, scattering seven hits and two walks, one of the latter being intentional. Over his last nine starts, since the beginning of July, Miley has a 2.04 ERA. He has been a bit lucky with his BABIP, but it also seems he has altered his repertoire and is generating more balls on the turf than he was earlier in the season. That was apparent this afternoon, with Wade recording 12 ground-ball outs, to three fly-ball ones.

After we stranded an Eaton bunt single with two outs in the top of the ninth, it was over to the Arizona bullpen to keep the team in things. LOOGY Joe Thatcher came in to get things started, and continued his largely unimpressive performances since coming to Arizona, by walking the only man he faced - of the 17 batters he has faced so far with the Diamondbacks, eight have reached base, on four hits and four walks. That brought in the Heath Bell Experience and, although he added another base-runner with a two-out walk, Bell struck out the Pirates' last man off the bench on three pitches, to send us into extra innings.

Parra killed our dreams in the top of the tenth, with an inning-ending double-play, his second twin killing of the day. Bell then went out for an encore Experience, and successfully negotiated the heart of the Pirates order. The 11th saw another double-play by the Diamondbacks after Pollock single to lead things off, this one off the bat of Gosewisch. After having only two DPs in total over the Baltimore series and the first two games here, Arizona made up for lost time with four this afternoon. Eury de la Rosa retired the first two left-handed batters for Milwaukee, and then we settled in for Josh Collmenter.

He took two pitches to end the 12th, and the Diamondbacks left two men aboard in the 13th. We seemed to be having an issue seeing the Pirates' pitcher, who had just been called up and was making his major-league debut. However, Eaton singled and advanced to second on a ground-out by Prado. With a base open, Hurdle chose not to pitch to Goldschmidt, and Hill floated the first pitch he saw into left-field for a somewhat tricky out. Still, can't complain about Aaron, as he had four hits this afternoon, his tenth multi-hit game already in August. He has an 11-game hitting streak going, and is hitting .447 (21-for-47) over that time.

Collmenter's next frame was considerably more dramatic. A lead-off hit was bunted over (acceptable this time, because it was by the pitcher since, as mentioned, the Pirates had emptied their bench). A groundout advanced the winning run to third, and Collmenter then walked the next two, including an IBB of McCutchen to load the bases, before getting a shallow fly-ball. On to the 13th! Nothing doing for either side there, though Collmenter came within one pitch of the fabled immaculate inning: he struck out the first two on three pitches apiece, then went 0-2 on the next guy. He did K the side, on a total of 11 pitches.

14th? Don't mind if we do. Ooh, and a 15th as well. Nothing much of significance for either team: we got a single from Paul Goldschmidt, while Brad Ziegler mowed down all six batters he faced, and made McCutchen look very bad in striking him out. That took us to the 16th, with a Diamondbacks win already assured: the franchise was 10-0 in games where we'd pitched 15 or more innings. Pollock led up with a walk, and Gregorius followed with a nice hit off a left-hander to put two on. For some reason, Gibson used Jason Kubel off the bench, and the inevitable K followed; Wil Nieves then advanced the runners with a ground-out, setting the stage for Eaton.

After taking a ball, Adam fisted the next pitch over the infield: a desperately-charging McCutchen couldn't quite come up with the catch, and with both runners going on the pitch, it was an easy two runs for the Diamondbacks. Prado popped out, and it was over to J.J. Putz for the save. He allowed a one out walk, and a groundout advanced the runner to second. With a base open, he took the unusual step of putting the tying run on base because the pitcher's spot was up next and Pittsburgh were out of players. After falling behind, Putz came back to get the debutant swinging at the high heat, putting the game and the series, finally to bed.

A lot of good efforts today - it was the 14th time this season we've played 11 or more innings, and are now 11-3 in those contests. Hill and Eaton each had four-hit games: Gregorius had two hits and a walk, while Goldschmidt also reached base safely three times, with a hit and a pair of walks. But the honors today probably go to the bullpen, who combined for eight shutout innings, allowing only two hits and striking out 10 batters. That'll get it done. It was also the first late win of the week, for SnakeLine purposes. 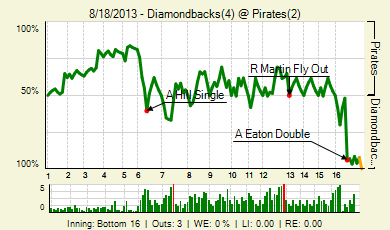 Given the length was pretty much twice normal, I'm awarding two comments of the game. First goes to hotclaws, for what seems like an accurate summary of the surrealness which is the SnakePit on a daily basis:

I think something has gone iffy here,I was making a joke about Brazilian waxes.

Then, there was also Rockkstar12's, after Brenly and Berthiaume noticed that we had Spanky, Tuffy and Didi on the basepaths, and Goldie at the plate.

It's off to Cincinnati now, for a crucial four-game set. They and the Cardinals both won today, so we remain static in the wild-card chase, but the Dodgers actually lost - yeah, I know it's difficult to believe - so we gain a game on them.