I like game-used items. They seem a little closer to the player than more generic memorabilia: I keep a Tony Clark bat by my bed at SnakePit Towers, so if there are any intruders. I'm swinging for the fences....

Share All sharing options for: Diamondbacks Thing of the Week: Game used, Cheap!

At the expensive end, the sky is virtually the limit for these things. If you have approaching a grand to spare, you can pick up Mark Reynolds 97th career home-run or Luis Gonzalez's 269th, or even a Curt Schilling bat - though the term "game used" might be a bit of a stretch for a player with a career OPS of .348... However, that's probably an over-pay, considering that for not much more, you can get a rather nice VIP package, benefiting the Tony Hawk Foundation, which includes a private dinner with Gonzo.

Nah, we are much more interested in the stuff at the other end of the price-scale. Though I do draw the line at generic baseballs, or the recent wave of baseball cards which contain tiny swatches from a player's jersey. So, here are five pieces of other game-used memorabilia for the Diamondbacks, all for under $50.

1, Tyler Skaggs Diamondbacks Stud Rookie Signed Game Used SL Ball PSA - $9.99 + $8 shipping
"Up for auction is a signed game used southern league ball that has been signed by stud Diamondbacks rookie pitcher Tyler Skaggs. Tyler signed this ball for me in person after a minor league game last year." Well, that's fairly straightforward. Skaggs did make 13 starts for Mobile in the Southern League last year, so this seems to be plausible, at least - though as with all game-used items, the buyer needs to beware. All my stuff came from the D-backs annual Yard Sale, which should be fairly reliable, I would hope!

2. TONY WOMACK ARIZONA DIAMONDBACK GAME USED LOUISVILLE SLUGGER GRAIN SEPERATION - $20.00 + $13 shipping
"Up for auction is a Louisville Slugger (Black Finish) Game Used by Tony Womack while he player for the Arizona Diamondbacks. Can't remember exactly what year I got it from my friend who worked at The BOB now Chase Field. The bat is in Game Used Condition (lball scuffs and a there is grain separation under his name nothing missing though)." The guy appears to have had an "in" with the team about 10-15 years ago, as he's also selling bats for the same price from Hanley Frias, Andy Fox and David Dellucci. About the same cost will get you a signed Matt Davidson game used bat - albeit, confusingly, not one used by Matt Davidson. 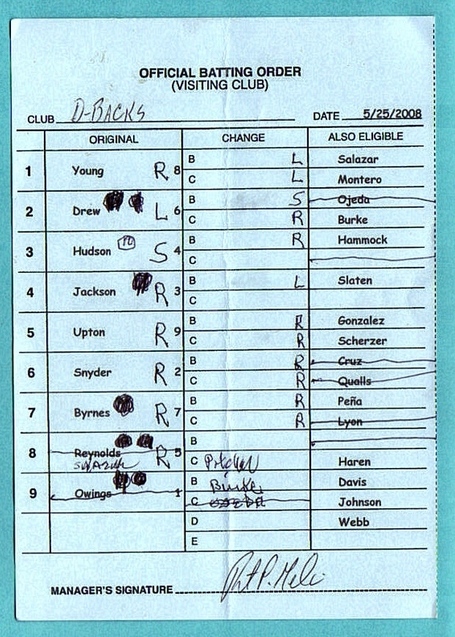 3. May 25, 2008 Arizona Diamondbacks Game Used Line Up Card Bob Melvin Autograph - $34.95 + $3.95 shipping
I recall seeing a stack of these at one of the yard sales two or three years ago, and did pick one up. This one is a little different, in that it's from a road game. It was a contest in Atlanta, when Micah Owings started for us, though unfortunately, it's not the game where he had four hits, two homers and six RBI - that took place the year before, and would certainly be cool to have. Still, this one was a nice 9-3 victory over the Braves, with Owings beating Tom Glavine.

4. Arizona Diamondbacks Game Used Baseball Pendant and Necklace - $40 + $3 shipping
Okay, I complained above about taking of game-used items and carving them up into tiny slices so you can sell multiple copies of the same thing. But I have to say, this one is neat. "I crafted the pendant using an authentic baseball used from an actual Diamondbacks game. I cut the leather cover of the ball into dime sized pieces and inserted them into a heavyweight chrome pendant. The white leather, red stitching and chrome framing provide a great contrast. Because the ball is game used, it shows some special character that is unique to that particular piece. The pendant will come with a 18" silver plated necklace and a necklace box." 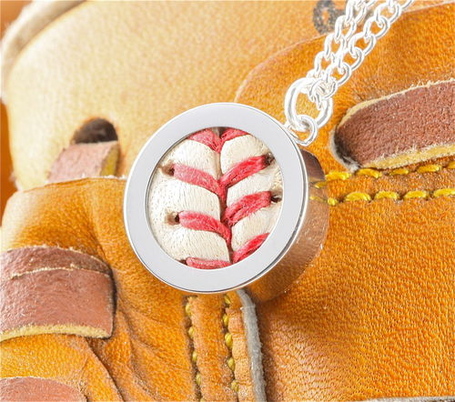 5. Arizona Diamondbacks Coasters with Game Used Dirt - Set of 4 - $46.98, free shipping
I was surprised by the number of items which include "game used dirt", whatever that may mean. Coasters like these, I can perhaps see, but you can also get Chase Field earth embedded into a crystal paperweight. And if that weren't enough, what about a set of game-used dirt cufflinks? Though I must confess, as someone who hasn't worn a shirt to work for approaching 13 years now, my first thought was, "There are people out there who still wear cufflinks?" They're something I remember my father possessing a set of. Maybe the fashion wheel has turned full circle, and they've become hip again...